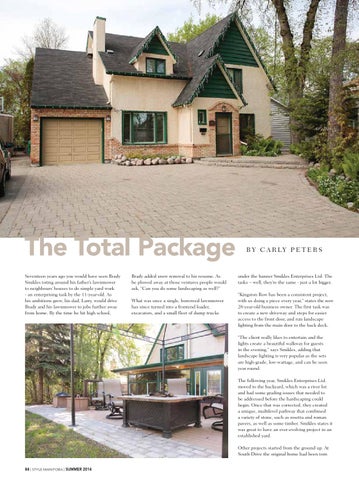 The Total Package Seventeen years ago you would have seen Brady Smikles toting around his father’s lawnmower to neighbours’ houses to do simple yard work - an enterprising task by the 11-year-old. As his ambitions grew, his dad, Larry, would drive Brady and his lawnmower to jobs further away from home. By the time he hit high school,

Brady added snow removal to his resume. As he plowed away at those ventures people would ask, “Can you do some landscaping as well?” What was once a single, borrowed lawnmower has since turned into a frontend loader, excavators, and a small fleet of dump trucks

under the banner Smikles Enterprises Ltd. The tasks – well, they’re the same - just a lot bigger. “Kingston Row has been a consistent project, with us doing a piece every year,” states the now 28-year-old business owner. The first task was to create a new driveway and steps for easier access to the front door, and run landscape lighting from the main door to the back deck. “The client really likes to entertain and the lights create a beautiful walkway for guests in the evening,” says Smikles, adding that landscape lighting is very popular as the sets are high-grade, low-wattage, and can be seen year round. The following year, Smikles Enterprises Ltd. moved to the backyard, which was a river lot and had some grading issues that needed to be addressed before the hardscaping could begin. Once that was corrected, they created a unique, multilevel pathway that combined a variety of stone, such as rosetta and roman pavers, as well as some timber. Smikles states it was great to have an ever-evolving project in an established yard. Other projects started from the ground up. At South Drive the original home had been torn