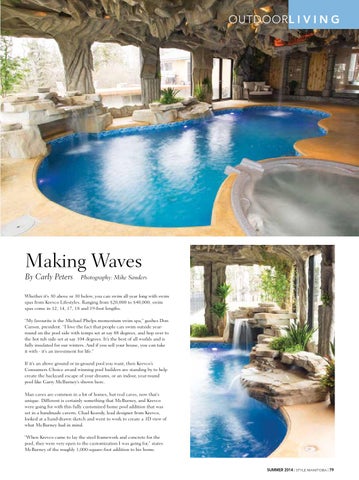 Whether it’s 30 above or 30 below, you can swim all year long with swim spas from Krevco Lifestyles. Ranging from $20,000 to $40,000, swim spas come in 12, 14, 17, 18 and 19-foot lengths. “My favourite is the Michael Phelps momentum swim spa,” gushes Don Carson, president. “I love the fact that people can swim outside yearround on the pool side with temps set at say 88 degrees, and hop over to the hot tub side set at say 104 degrees. It’s the best of all worlds and is fully insulated for our winters. And if you sell your house, you can take it with - it’s an investment for life.” If it’s an above ground or in-ground pool you want, then Krevco’s Consumers Choice award winning pool builders are standing by to help create the backyard escape of your dreams, or an indoor, year-round pool like Garry McBurney’s shown here. Man caves are common in a lot of homes, but real caves, now that’s unique. Different is certainly something that McBurney, and Krevco were going for with this fully customized home pool addition that was set in a handmade cavern. Chad Kozody, lead designer from Krevco, looked at a hand-drawn sketch and went to work to create a 3D view of what McBurney had in mind. “When Krevco came to lay the steel framework and concrete for the pool, they were very open to the customization I was going for,” states McBurney of the roughly 1,000-square-foot addition to his home.