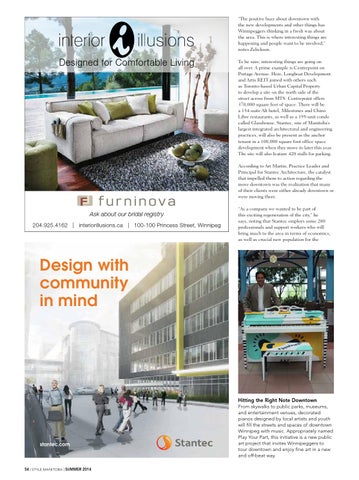 “The positive buzz about downtown with the new developments and other things has Winnipeggers thinking in a fresh way about the area. This is where interesting things are happening and people want to be involved,” notes Zelickson.

To be sure, interesting things are going on all over. A prime example is Centrepoint on Portage Avenue. Here, Longboat Development and Artis REIT joined with others such as Toronto-based Urban Capital Property to develop a site on the north side of the street across from MTS. Centrepoint offers 370,000 square feet of space. There will be a 154-suite Alt hotel, Milestones and Chino Libre restaurants, as well as a 195-unit condo called Glasshouse. Stantec, one of Manitoba’s largest integrated architectural and engineering practices, will also be present as the anchor tenant in a 100,000 square foot office space development when they move in later this year. The site will also feature 420 stalls for parking. According to Art Martin, Practice Leader and Principal for Stantec Architecture, the catalyst that impelled them to action regarding the move downtown was the realization that many of their clients were either already downtown or were moving there.

“As a company we wanted to be part of this exciting regeneration of the city,” he says, noting that Stantec employs some 280 professionals and support workers who will bring much to the area in terms of economics, as well as crucial new population for the

Design with community in mind

Hitting the Right Note Downtown From skywalks to public parks, museums, and entertainment venues, decorated pianos designed by local artists and youth will fill the streets and spaces of downtown Winnipeg with music. Appropriately named Play Your Part, this initiative is a new public art project that invites Winnipeggers to tour downtown and enjoy fine art in a new and off-beat way.