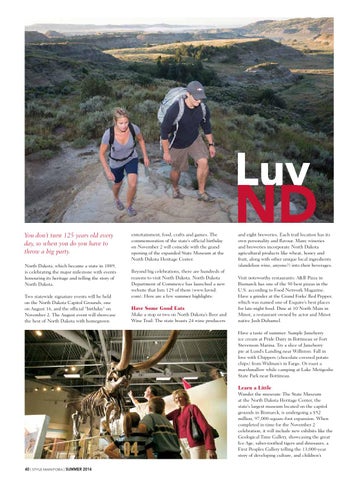 Luv You don’t turn 125 years old every day, so when you do you have to throw a big party. North Dakota, which became a state in 1889, is celebrating the major milestone with events honouring its heritage and telling the story of North Dakota. Two statewide signature events will be held on the North Dakota Capitol Grounds, one on August 16, and the official “birthday” on November 2. The August event will showcase the best of North Dakota with homegrown

entertainment, food, crafts and games. The commemoration of the state’s official birthday on November 2 will coincide with the grand opening of the expanded State Museum at the North Dakota Heritage Center. Beyond big celebrations, there are hundreds of reasons to visit North Dakota. North Dakota Department of Commerce has launched a new website that lists 125 of them (www.luvnd. com). Here are a few summer highlights: Have Some Good Eats Make a stop or two on North Dakota’s Beer and Wine Trail: The state boasts 24 wine producers

and eight breweries. Each trail location has its own personality and flavour. Many wineries and breweries incorporate North Dakota agricultural products like wheat, honey and fruit, along with other unique local ingredients (dandelion wine, anyone?) into their beverages. Visit noteworthy restaurants: A&B Pizza in Bismarck has one of the 50 best pizzas in the U.S. according to Food Network Magazine. Have a grinder at the Grand Forks’ Red Pepper, which was named one of Esquire’s best places for late-night food. Dine at 10 North Main in Minot, a restaurant owned by actor and Minot native Josh Duhamel. Have a taste of summer: Sample Juneberry ice cream at Pride Dairy in Bottineau or Fort Stevenson Marina. Try a slice of Juneberry pie at Lund’s Landing near Williston. Fall in love with Chippers (chocolate covered potato chips) from Widman’s in Fargo. Or roast a marshmallow while camping at Lake Metigoshe State Park near Bottineau. Learn a Little Wander the museum: The State Museum at the North Dakota Heritage Center, the state’s largest museum located on the capitol grounds in Bismarck, is undergoing a $52 million, 97,000-square-foot expansion. When completed in time for the November 2 celebration, it will include new exhibits like the Geological Time Gallery, showcasing the great Ice Age, saber-toothed tigers and dinosaurs, a First Peoples Gallery telling the 13,000-year story of developing culture, and children’s