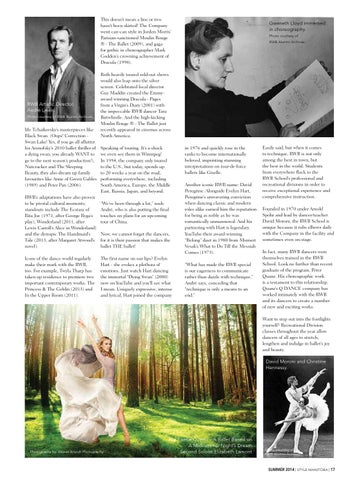 This doesn’t mean a line or two hasn’t been skirted! The Company went can-can style in Jorden Morris’ Parisian-sanctioned Moulin Rouge ® - The Ballet (2009), and gaga for gothic in choreographer Mark Godden’s crowning achievement of Dracula (1998).

life Tchaikovsky’s masterpieces like Black Swan (Oops! Correction Swan Lake! Yes, if you go all aflutter for Aronofsky’s 2010 ballet thriller of a dying swan, you already WANT to go to the next season’s production!), Nutcracker and The Sleeping Beauty, they also dream up family favourites like Anne of Green Gables (1989) and Peter Pan (2006). RWB’s adaptations have also proven to be pivotal cultural moments; standouts include The Ecstasy of Rita Joe (1971, after George Ryga’s play), Wonderland (2011, after Lewis Carroll’s Alice in Wonderland) and the dystopic The Handmaid’s Tale (2013, after Margaret Atwood’s novel). Icons of the dance world regularly make their mark with the RWB, too. For example, Twyla Tharp has taken up residence to premiere two important contemporary works: The Princess & The Goblin (2013) and In the Upper Room (2011).

Both heavily toured sold-out shows would also leap onto the silver screen. Celebrated local director Guy Maddin created the Emmyaward winning Dracula - Pages from a Virgin’s Diary (2001) with the impeccable RWB dancer Tara Birtwhistle. And the high-kicking Moulin Rouge ® - The Ballet just recently appeared in cinemas across North America. Speaking of touring. It’s a shock we even see them in Winnipeg! In 1954, the company only toured to the U.S., but today, spends up to 20 weeks a year on the road, performing everywhere, including South America, Europe, the Middle East, Russia, Japan, and beyond. “We’ve been through a lot,” nods André, who is also putting the final touches on plans for an upcoming tour of China. Now, we cannot forget the dancers, for it is their passion that makes the ballet THE ballet! The first name on our lips? Evelyn Hart - she evokes a plethora of emotions. Just watch Hart dancing the immortal “Dying Swan” (2000) now on YouTube and you’ll see what I mean. Uniquely expressive, intense and lyrical, Hart joined the company

in 1976 and quickly rose in the ranks to become internationally beloved, imprinting stunning interpretations on tour-de-force ballets like Giselle. Another iconic RWB name: David Peregrine. Alongside Evelyn Hart, Peregrine’s unwavering conviction when dancing classic and modern roles alike earned him the reputation for being as noble as he was romantically unmannered. And his partnering with Hart is legendary. YouTube their award-winning “Belong” duet in 1980 from Mornert Vesak’s What to Do Till the Messiah Comes (1973). “What has made the RWB special is our eagerness to communicate rather than dazzle with technique,” André says, conceding that “technique is only a means to an end.”

Easily said, but when it comes to technique, RWB is not only among the best in town, but the best in the world. Students from everywhere flock to the RWB School’s professional and recreational divisions in order to receive exceptional experience and comprehensive instruction. Founded in 1970 under Arnold Spohr and lead by dancer/teacher David Moroni, the RWB School is unique because it rubs elbows daily with the Company in the facility and sometimes even on-stage. In fact, many RWB dancers were themselves trained in the RWB School. Look no further than recent graduate of the program, Peter Quanz. His choreographic work is a testament to this relationship. Quanz’s Q DANCE company has worked intimately with the RWB and its dancers to create a number of new and exciting works. Want to step out into the footlights yourself? Recreational Division classes throughout the year allow dancers of all ages to stretch, lengthen and indulge in ballet’s joy and beauty. David Moroni and Christine Hennessy.