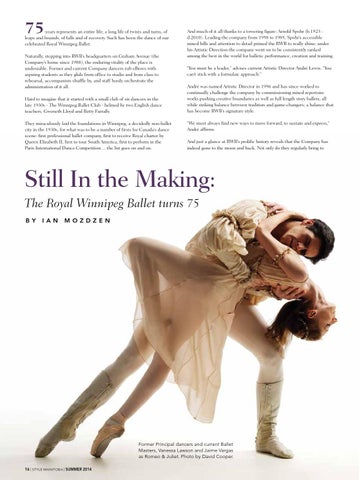 years represents an entire life; a long life of twists and turns, of leaps and bounds, of falls and of recovery. Such has been the dance of our celebrated Royal Winnipeg Ballet. Naturally, stepping into RWB’s headquarters on Graham Avenue (the Company’s home since 1988), the enduring vitality of the place is undeniable. Former and current Company dancers rub elbows with aspiring students as they glide from office to studio and from class to rehearsal, accompanists shuffle by, and staff busily orchestrate the administration of it all. Hard to imagine that it started with a small club of six dancers in the late 1930s - The Winnipeg Ballet Club - helmed by two English dance teachers, Gweneth Lloyd and Betty Farrally. They miraculously laid the foundations in Winnipeg, a decidedly non-ballet city in the 1930s, for what was to be a number of firsts for Canada’s dance scene: first professional ballet company, first to receive Royal charter by Queen Elizabeth II, first to tour South America, first to perform in the Paris International Dance Competition ... the list goes on and on.

And much of it all thanks to a towering figure: Arnold Spohr (b.1923 d.2010). Leading the company from 1958 to 1985, Spohr’s accessible mixed bills and attention to detail primed the RWB to really shine; under his Artistic Direction the company went on to be consistently ranked among the best in the world for balletic performance, creation and training. “You must be a leader,” advises current Artistic Director André Lewis. “You can’t stick with a formulaic approach.” André was named Artistic Director in 1996 and has since worked to continually challenge the company by commissioning mixed repertoire works pushing creative boundaries as well as full length story ballets; all while striking balance between tradition and game-changers; a balance that has become RWB’s signature style. “We must always find new ways to move forward, to sustain and express,” André affirms. And just a glance at RWB’s prolific history reveals that the Company has indeed gone to the moon and back. Not only do they regularly bring to

Still In the Making: The Royal Winnipeg Ballet turns 75 by