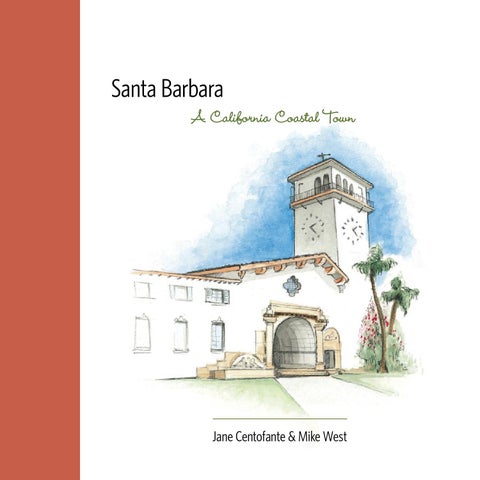 Text ÂŠ2014 by Jane Centofante Artwork ÂŠ2014 by Mike West All rights reserved. No part of this publication may be reproduced without the written permission of the publisher. Brand names and trademarks of products mentioned in this book are the property of their registered owners. Library of Congress Control Number 2014912427 ISBN 978-0-692-25407-3 Published by Boardwalk Press Printed and bound in the United States of America boardwalkpress.com 10 9 8 7 6 5 4 3 2 1 Book design: Linda Warren, Studio Deluxe

”In the fairest of valleys, on the tranquilest shore, By mountains walled in, and an ocean before, With her brow on the hills, and her feet to the sea, Santa Barbara stands—the Queen that’s to be.”

Set like a priceless jewel in the crown, Santa Barbara perches on the central California coast, its lustrous facets sparkling aside the Pacific Ocean. Once a diamond in the rough where rugged hills spilled down onto sandy dunes, this region was first inhabited by the native Chumash Indians. As Spanish explorers and missionaries arrived, they brought new customs and traditions and established one of the townâ&amp;#x20AC;&amp;#x2122;s most cherished gems, the Santa Barbara Mission. Today, it is a unique city that still possesses the charm of its old Spanish days, while showcasing the sophistication of a modern and vibrant cultural center. Take a walk through this California coastal town and its surrounding enclaves, each of them places to be discovered and treasured. Santa Barbara truly is California royalty.

Blooming jacarandas grace State Street... along with signs of the time 4

Beach classics the to neighborhood La Arcada â&amp;#x20AC;&amp;#x201D; a in place shop and sun for tourists and turtles alike 7

Sandpipers and sunbathers flock to a favorite beachfront grill 14

Cabrillo sailing the blue in 1452

and a confetti of colorful history

The Lobero Theatre plays all that jazzâ&amp;#x20AC;Ś 30

while the grand Granada is home to classical encores 31

Happy memories made at El Encantoâ&amp;#x20AC;Ś

Colorful bougainvillea rolls out the red carpet in charming Summerland

The quaint lower village of Montecito is dotted with shops and cafesâ&amp;#x20AC;Ś 44

while an adobe church leads the way to the upper village

Escape California style at the timeless Biltmore and Coral Casino 49

Surf’s up at Hendry’s Beach!

Sunday in the park means a walk with art 58

The painted ladies of Brinkerhoff Avenue share a cherished past

Giraffes at the zoo, octopuses at the sea center, butterflies at the botanical gardens and a hungry T-Rex at the natural history museum... 68

Los Olivos â&amp;#x20AC;&amp;#x201D; a spot for sundries and sipping local wines in a quartet of Adirondacks

As fall colors turn on the vine...

Storke Tower — a beacon at UCSB’s seaside campus and lagoon

With thanks For both of us, this book would not have happened without the love and support of so many friends and family who constantly keep us buoyed in both calm and rough waters. We offer heartfelt thanks to David Craddock and Linda Wenglikowski, two for the road who share our fondness for the red tile city by the sea; to Steve Smith, our ever-vigilant business manager who also keeps us laughing along the way; and to Andrew Katnik, as efficient an assistant as one would ever hope to find. Bringing this book to fruition was in large part due to the talents of more than a few gifted minds, with special thanks to Patricia LaVigne for her constant encouragement and suggestions for all things creative; and to Linda Warren and her talented colleagues at the Warren Group, whose collective eye for design is always beautifully expressed on these pages. We thank you all from the bottom of our hearts.

About the writer Jane Centofante worked as a magazine editor before taking up life as a freelance editor of non-fiction books. Her first book in this coastal series was Manhattan Beach: A California Beach Town. She and her husband were married in Santa Barbara and always returnâ&amp;#x20AC;Ś same time, next year.

About the artist Mike West is from just about everywhere but eventually settled in the Los Angeles area and attended the Art Center College of Design in Pasadena. He frequently visits Santa Barbara for one festival or another.

Santa Barbara: A California Coastal Townis an illustrated stroll through one of the state’s most charming and historical towns. Perched along the California central coastline, this unique city still possesses the charm of it old Spanish days, while showing the sophistication of a modern and vibrant culture center. Santa Barbara and its surrounding enclaves – Summerland, Montecito and Santa Ynez wine valley – are all places to be seen and treasured. 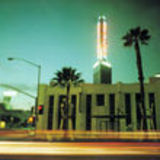