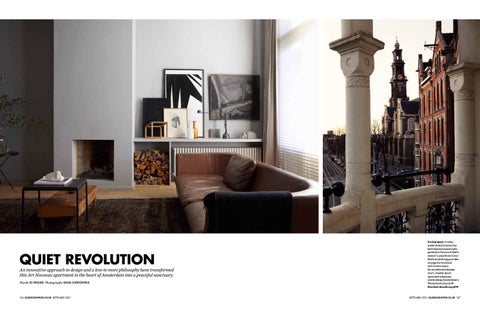 tef Bakker knows a lot about creating a positive atmosphere. Working on interior projects that range from lounge bars to care homes, he addresses the needs of his clients by considering their response to sound and texture alongside visual factors. Stef started out as a prop buyer for commercials and feature films, which helped him fine-tune his ability to spot the subtle details that make a big impact. He now teaches at the Design Academy Eindhoven’s department of Man and Wellbeing, headed up by British designer Ilse Crawford. His unique style – a simple but very distinctive aesthetic – has been beautifully executed throughout his own apartment in the centre of Amsterdam. Here, he talks to us about the design ethos behind his peaceful home. 138 ELLEDECOration.co.uk september 2012

What attracted you to the apartment? The high ceilings and decorative Art Nouveau features, and the fact that the balconies overlook the canal at the front and the old gardens at the back. Did it need a lot of work? It hadn’t been decorated since the 1980s, so I got rid of the glass bricks and mosaic tiles. I changed the layout to make it completely open – the light now meets in the middle. What inspired the colour scheme? Using grey made the living areas feel a bit more industrial and balanced out the ornamental period features. In every room, the ceiling, walls and doors are finished in the same colour – it makes the space feel more calming. How would you describe your style? It’s more of a method, really. I work to create the right atmosphere and that’s down to

a lot of different ingredients including light, temperature and sound – they all play a part. Do you see yourself as a minimalist? It’s not something I aspire to. I cleared out a lot of stuff when I moved here because I wanted to get to know the place without too many things in it. Are you drawn to vintage pieces? Yes, they add so much more to a space than predictable modern furniture, and I love the game of chance that’s involved in finding every piece. How do you feel about decorative objects? It’s not often that I find decorative pieces that will stand the test of time. We have so many products thrown at us that look interesting at first, but it takes years to figure out which ones will become real heroes.

Portrait Homeowner Stef Bakker has used colour, light and texture to create a calm, atmospheric space Living area Venetian blinds control light from the oversized windows. John Lewis can make a similar system to measure. An old display stand from a grocery stall is used as a coffee table; for a 1980s leather sofa, try The Old Cinema ➤ Stockist details on p199

‘So many products look interesting at first, but it takes years to figure out which ones will become real heroes’

Workspace Built-in shelving painted the same colour as the walls keeps clutter under control, helps to conceal the radiator and incorporates a desk area. The grey upholstered ‘Groovy’ chair is a 1970s design by Pierre Paulin Kitchen A hostess trolley makes it easy to have breakfast on the balcony. The painting above it is by Bernard Buffet ➤

Kitchen/dining area The Bulthaup kitchen has a utilitarian feel and is painted in Farrow &amp; Ball’s ‘Pavilion Gray’, a pale shade that reflects the light. The farmhouse table is an 18th-century antique; the wooden ‘Result’ chairs are a 1950s design by Friso Kramer. For vintage kitchenware, try Summerill &amp; Bishop ➤ Stockist details on p199

‘I go for lesser-known vintage pieces, rather than furniture everyone recognises. it creates a more exciting environment’

‘the green bedroom was inspired by the trees that grow right up to the window. the colour makes the space feel calming’

Bathroom The homeowner likes to use sound to help create atmosphere – here, a CD player from Muji allows music to set the mood Bedroom Walls painted in muted green echo the trees outside. ‘They’re so huge – it feels like you’re in a tree house,’ says the homeowner. The wall-hung Op Art piece is an old envelope that held a 1970s silk screen print E D Stockist details on p199