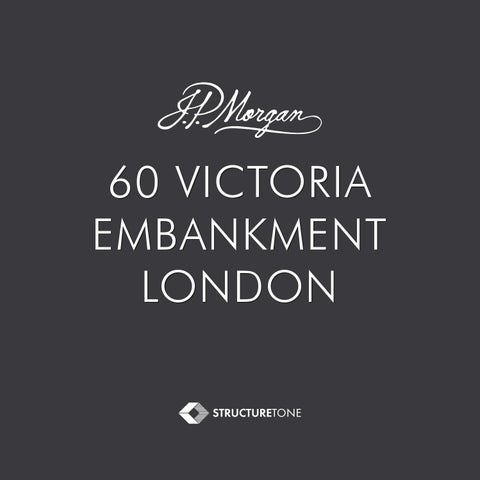 FORWARD The project at 60 Victoria Embankment was much more than ‘just another project’. Anyone who was regularly involved will look back on this as one of the most challenging and rewarding projects they will have ever delivered – indeed a career highlight for many. The variety of all of the work faces and the multitude of skills required, made this a collection of diverse projects, which ranged from the complex services engineering, to the incredible structural feats to create the new reception, through to the extensive fit-out which included cutting a new atrium through the centre of the building.

All this was undertaken whilst the building remained in occupation with an operational live data centre. Further, there was a Disaster Recovery facility which had to be available to the client within two hours’ notice. By its very nature, the team required from the; client, consultant and contractor for a project such as this, was large and very diverse. Without each person’s full commitment, a successful outcome would have been unlikely. No doubt, whilst there were particularly challenging moments for every organisation and the individuals involved, it’s clear that only a motivated

and focussed team effort could achieve such successful results. It was a pleasure to be involved – both as a team member and a representative of Structure Tone. Structure Tone is delighted to have created this book to commemorate the significant collected achievements.

“ The design for this building, to which the first premium of £300 was awarded, is by Messrs. Davis and Emanuel, of Finsbury-circus, who are engaged to superintend its construction. The style is French Renaissance of a moderate type, the materials to be used in construction are red brick, with Ancaster Stone dressings, with green slates for the roofs, and the estimated cost, exclusive of fittings, is £31,000.” The Building News, August 22nd 1879

Established in 1442 during the reign of Henry V, the City of London School traces its origins to a bequest of land by John Carpenter, Town Clerk of London on his death. It read “for the finding and bringing up of four poor men’s children with meat, drink, apparel, learning at the schools, in the universities, etc., until they be preferred, and then others in their places for ever.“

Unlike any other established independent school of the time, it was largely a day school with a maximum of 630 pupils. It promoted a practical and progressive scheme of education which was well ahead of its time. It was the first school in England to include science on the curriculum and to include scientific experiments as part of its teaching.

In 1865 Victoria Embankment was reclaimed from the River Thames and in total the Thames Embankment project gentrified a total of 89,000 square meters.

Designed by Davis and Emanuel Pevsner Architects and built by John Mowlem & Company, the foundation stone of The City of London School was laid on the 14th October 1880.

In the late Nineteenth Century many public schools moved away from Greater London for the tranqulity of the countryside, however, the City of London School was uniquely bound to the Corporation of London.

60 Victoria Embankment was publicly opened by the Prince of Wales (the future King Edward VII), and became the permanent home of the City of London School in 1883 for more than 105 years.

THE TRANSFORMATION J.P. Morgan needed to reposition 60 Victoria Embankment as the new EMEA headquarters for its Asset Management team. One of the key aims of the project was to create a bold new entrance and one that would enhance the surrounding public spaces. The project included the creation of a public plaza space at the south end of John Carpenter Street which incorporates trees, low-level planting and seating, as well as a newly-installed bronze sculpture from J.P.Morganâ&#x20AC;&#x2122;s New York office by American

artist J Seward Johnson Jr, which has proved very popular with local office workers and passing tourists alike. The other key aim was to let light into the building. This was part done by replacement of original panels with large singular glass panels supported by a curtain walling system. The resounding success was the external cleaning of the Old School Building and the lighting effect which creates a splendorous backdrop to the river Thames flowing in front of it at night.

One of only three Glass Structures of its kind in the world.

THE GLASS BOX The transformation was dependent on creating a suitable main entrance hall to ensure there was no disconnect between the 1880s and 1980s buildings. The team worked closely to ensure the boundaries between the two achieved a common look and feel, and the glass atrium was absolutely fundamental to achieving this aim. The design required the existing reception footplate and head height to be enlarged with uninterrupted sightlines across the entire lobby area.

The main reception canopy is completely formed from ultra low iron, toughened laminated glass. Itâ&#x20AC;&#x2122;s one of only three in the world of this size and has a number of unique design characteristics. Finishes were made up of Portland Stone from England for the wall lining; Alpine White on the floor from Turkey, and Eramosa brown stone (mud strata) from Italy for the starburst stone feature.

Over 1 million hours worked without a reportable accident

THE OLD SCHOOL BUILDING J.P. Morgan’s London Asset Management building in is an unlikely extension of an 1879 historic London school that spawned a number of prominent scholars, businessmen and politicians, even an English Prime Minister. The school retains the grand entrance to the original headmaster offices and the jewel in the crown - ‘the great hall’. The original London Boys School, frozen in time is now brought back to 21st Century life.

The objective was to blend this historic building with the new so that the rooms could be used for client meeting and presentational spaces. The challenge was to restore and emphasise the fine materials and workmanship of days gone by, whilst at the same time hiding away tech and Audio Visual, so as to have the day to day business functionality of a high performance conference space.

Merging the two buildings separated by 105 years was considerably challenging.

Formally the play ground for the City of London Boys School

THE ATRIUM AND INTERCONNECTING STAIR One of the key challenges was to transform the shadowy floors into bright collaborative spaces that encouraged staff to engage and interact with each other. The interconnecting stair case was fundamental to this. There were huge challenges to overcome in order to create the stair case including breaking through from the roof to form a spectacular atrium down to level 4, with projecting meeting rooms and a floating stair case. The lighting levels were dramatically improved from this roof skylight and glazed atrium.

THE EXECUTIVE SUITES The Executive floor was always going to be a highlight in this already exciting project. After arriving at the stunning glass box entrance, a lift takes you straight up to the highly impressive executive 6th floor with client meeting and dining suites. It also features the impressive â&#x20AC;&#x153;Lantern Roomâ&#x20AC;?, with panoramic views of the Thames and central London.

THE CANTEEN With catering facilities throughout 60 Victoria Embankment, including two full chefs kitchens, the Canteen completes the catering for the building creating a hub for meeting and a space to enjoy the food provided by J.P.Morgan.

Live Disaster Recovery facility had to be available to the client within two hours’ notice.

DISASTER RECOVERY What is impressive about this project is the work that has gone into some of the floors that you won’t see. The Disaster Recovery Floor is a good example of this using existing material from J.P.Morgan’s previous office at 125 London Wall.

SUSTAINABILITY Throughout this project, sustainability was always at the forefront of our minds and some of the initiatives we came up with enabled the project to achieve the vision whilst achieving LEED Platinum standard. From the introduction of over 140 cycle racks at basement level to encourage employees to ride to work to the LED lighting system used across the entire floor plates.

We upgraded to BMS, upgraded from VAV to FCU all meaning the building used less energy to run. A real piece of ingenuity from the team was to use materials reclaimed from J.P.Morganâ&#x20AC;&#x2122;s office at 125 London Wall to create two disaster recovery centres. The waste diverted from landfill and recycled was 96%.

KEY PARTS OF THE PROJECT 1.

Introduced efficient heating and ventilation throughout

Transformed a ‘side street’ to a landscaped external plaza

Increased daylight by replacing the west façade at levels 3-4

Introduced LED lighting across all open-plan and generic office floors

Upgraded engineering facilities, making them easier and safer to operate and maintain

Provided broadcast-quality AV throughout, including the former school building

Brought great hall, headmaster’s offices and library back into dayto-day use

Restored a listed building for future generations that can be used for lectures, standing receptions and seated banquets.

â&#x20AC;&#x153;We wanted to create a space that would leave a lasting impact on visitors and provide staff with a space they wanted to work in. The team have worked hard to achieve this and we believe the refurbishment has completely lifted the building and blown new life into it.â&#x20AC;? John Robinson, J.P. Morgan 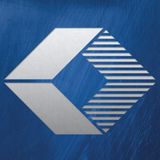 The project at 60 Victoria Embankment was much more than ‘just another project’. Anyone who was regularly involved will look back on this a...

The project at 60 Victoria Embankment was much more than ‘just another project’. Anyone who was regularly involved will look back on this a...