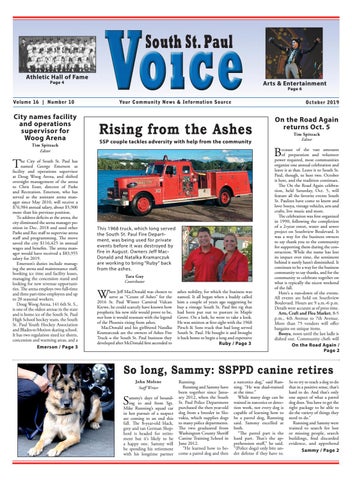 Rising from the Ashes

SSP couple tackles adversity with help from the community

he City of South St. Paul has named George Emerson as facility and operations supervisor at Doug Woog Arena, and shifted oversight management of the arena to Chris Esser, director of Parks and Recreation. Emerson, who has served as the assistant arena manager since May 2010, will receive a $76,984 annual salary, about $5,900 more than his previous position. To address deficits at the arena, the city eliminated the arena manager position in Dec. 2018 and used other Parks and Rec staff to supervise arena staff and programming. The move saved the city $116,425 in annual wages and benefits. The arena manager would have received a $83,955 salary for 2019. Emerson’s duties include managing the arena and maintenance staff, booking ice time and facility leases, managing the concession stand and looking for new revenue opportunities. The arena employs two full-time and three part-time employees and up to 20 seasonal workers. Doug Woog Arena, 141 6th St. S., is one of the oldest arenas in the state and is home ice of the South St. Paul High School hockey team, the South St. Paul Youth Hockey Association and Blades-n-Motion skating school. It has two regulation sized ice sheets, concession and warming areas, and a

On the Road Again returns Oct. 5

This 1968 truck, which long served the South St. Paul Fire Department, was being used for private events before it was destroyed by fire in August. Owners Jeff MacDonald and Natalka Kramarczuk are working to bring “Ruby” back from the ashes. Tara Guy Contributor

hen Jeff MacDonald was chosen to serve as “Count of Ashes” for the 2016 St. Paul Winter Carnival Vulcan Krewe, he could scarcely have known how prophetic his new title would prove to be, nor how it would resonate with the legend of the Phoenix rising from ashes. MacDonald and his girlfriend Natalka Kramarczuk are the owners of Ashes Fire Truck – the South St. Paul business they developed after McDonald first ascended to

ashes nobility, for which the business was named. It all began when a buddy called him a couple of years ago suggesting he buy a vintage South St. Paul fire rig that had been put out to pasture in Maple Grove. On a lark, he went to take a look. He was smitten at first sight with the 1968 Pirsch &amp; Sons truck that had long served South St. Paul. He bought it and brought it back home to begin a long and expensive Ruby / Page 3

ecause of the vast amounts of preparation and volunteer power required, most communities organize one annual celebration and leave it at that. Leave it to South St. Paul, though, to host two. October is here, and the tradition continues. The On the Road Again celebration, held Saturday, Oct. 5, will feature all the favorite events South St. Paulites have come to know and love: booya, vintage vehicles, arts and crafts, live music and more. The celebration was first organized in 1990, following the completion of a 2-year street, water and sewer project on Southview Boulevard. It was a way for the business owners to say thank you to the community for supporting them during the construction. While the name has lost its impact over time, the sentiment behind it surely hasn’t diminished. It continues to be a way for the business community to say thanks, and for the community to celebrate together on what is typically the nicest weekend of the fall. Here’s a run-down of the events. All events are held on Southview Boulevard. Hours are 9 a.m.-6 p.m. Details were accurate as of press time. Arts, Craft and Flea Market, 8-5 p.m., 4th Avenue to 7th Avenue. More than 75 vendors will offer bargains on unique items. Booya, noon until the last ladle is dished out. Community chefs will On the Road Again / Page 2

ammy’s days of bounding to and from Sgt. Mike Running’s squad car in hot pursuit of a suspect are coming to an end this fall. The 8-year-old black, grey and tan German Shepherd is headed for retirement but it’s likely to be a happy one. Sammy will be spending his retirement with his longtime partner

Running. Running and Sammy have been together since January 2012, when the South St. Paul Police Department purchased the then year-old dog from a breeder in Slovakia, which supplies dogs to many police departments. The two graduated from Washington County Sheriff Canine Training School in June 2012. “He learned how to become a patrol dog and then

a narcotics dog,” said Running. “He was dual-trained at the time.” While many dogs can be trained in narcotics or detection work, not every dog is capable of learning how to be a patrol dog, Running said. Sammy excelled at both. “The patrol part is the hard part. That’s the apprehension stuff,” he said. “(Police dogs) only bite under defense if they have to.

So to try to teach a dog to do that in a positive sense, that’s hard to do. And that’s only one aspect of what a patrol dog does. You have to get the right package to be able to do the variety of things they need to do.” Running and Sammy were trained to search for lost or missing people, search buildings, find discarded evidence, and apprehend 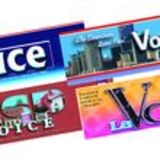