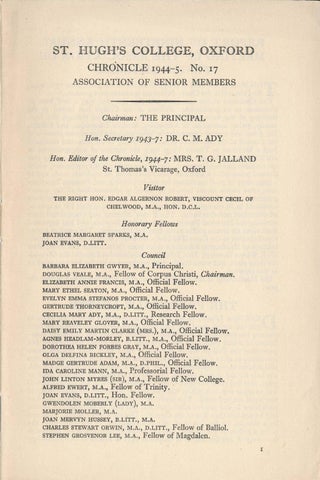 REPORT OF NINETEENTH ANNUAL MEETING OF THE ASSOCIATION OF SENIOR MEMBERS HE Meeting was held at Holywell Manor on Saturday, June 17th, 1944, fThethe Principal in the Chair. Seventeen members were present. Chairman in her statement said that the year 1943-4 had been as strenuous as its predecessor. Fellows of the College had helped in the teaching of the numerous Service Cadets who passed through the University, giving instruction in Astronomy, Modern Languages, and Politics. Dr. Adam had created a precedent by being made the first woman member of the Council of the Astronomical Society. Owing to the abnormal exodus of Junior Members in Trinity Term 1943, the number of undergraduates in residence during the year had been smaller than usual. For the coming year the situation had been reversed. Owing to a change in the regulations, which allowed prospective teachers to spend three years on academic work, and to a large entry of good candidates for the Scholarship and Entrance Examination, extra rooms would have to be found to accommodate all the undergraduates expected to come into residence. The conduct of Junior Members continued to be exemplary, and they managed to enjoy their life in spite of all difficulties and drawbacks. The Tutors&#39; Meeting and Council had been studying the Norwood Report on Secondary Education, and had expressed their views on certain points to the Board of Education. The result of a contested election to the Council had been the return of Miss M. Moller, Headmistress of Headington School for three years (Miss Moller 118 votes, Miss M. E. Reeves 82 votes). Mrs. Jalland was re-elected as Editor of the Chronicle for three years, and warm thanks were expressed to her for her past services in this capacity. The Membership of the Association had risen from 618 to 653 during the year.

THE PRINCIPAL&#39;S LETTE EAR Mrs. Jalland. In the year which has passed since I last wrote to D you two events stand out, both most gratifying to your readers, for both concern members of the Association. One has devised the munificent benefaction of which particulars have appeared in the Press; and through her generosity the College will at the end of eight years have received sums amounting in all to kzo,000, to be applied to what we have never before been able to boast ofâ&amp;#x20AC;&amp;#x201D;an Endowment Fund. I have always wished for such a Fund, not only for the obvious reasons, but also so that other benefactors, small or great, may find ready to hand a channel for their goodwill, leaving the Council free to apply any such gift in whatever sphere of College life at the moment may need strengthening. The gratitude of the Association for this proof of confidence in our present administration, and faith in the College&#39;s future, will be not less than that of the Council. The other event is the attainment by a woman, for the first time, of professorial rank in the University, she being a Fellow of the College. Dr. Ida Mann&#39;s distinction in her profession is unrivalled, and her advent to Oxford in 1941 as Reader in Ophthalmology 2

had an immediate effect in the development of research and in the formation of long-term projects now likely to be realized in the sphere over which she presides, and certain to be of incalculable importance to the whole Empire. She has been a congenial member of our reduced S.C.R. in Holywell Manor since taking up her first appointment, and we are very proud of our first Professorial Fellow. The day-to-day life of College has been little changed since 1943, but with one exception very thankfully accepted, the relaxation of A.R.P. I am glad to be able to say that an increasing number of undergraduates are deciding for Education as a future career. This is as it should be, both because of our old tradition and because of the country&#39;s paramount need. The pressure on our space continues unabated, and is intensified by the return of the threeyear degree course for all women matriculated under 19 years of age; which creates many problems. We do not intend to be beaten by any of them! But the tribulation of &#39;Southern England&#39;, and of London, where so many of our members live and work, has caused much sorrow. Your obituary records the loss of precious lives, full of promise and in other circumstances prepared for many years of service to the country. Characteristic faith and hope have been shown by those in whom, even during their undergraduate days, we had noted the beginning of these graces, and in the thought of our departed the Communion of Saints becomes a present reality, lasting indeed beyond all other experience in catastrophic days like ours. I hope that members of the Association know that the separations, anxieties, and bereavements to which they are subject are never forgotten here, but are our deep and abiding concern. All letters are read with closest interest and sympathy, and future reunion looked forward to by members in residence more and more as each year passes. May God&#39;s blessing rest on all. Yours sincerely, January 1945 B. E. GWYER.

PROFESSO ID M NN ISS Ida Mann, M.A. (Oxon.), D.Sc. (Lond.), M.B., B.S. (Lond.), F.R.C.S. (England), has been granted the title of Professor while holdM ing the post of Margaret Ogilvie Reader in Ophthalmology. Miss Mann is the first woman to hold the title of Professor in the University. Professor Mann, who is 51, received her medical training at the London School of Medicine for Women and St. Mary&#39;s Hospital, Paddington. After holding resident appointments she was a research student in the Institute of Pathology and Research in that hospital. She was later Henry George Plummer Fellow of the Imperial College of Science and Technology, and a Medical Research Council worker for eight years. She has also held the posts of Pathologist and Assistant Surgeon at the Central London Ophthalmic Hospital, Surgeon at the Royal London Ophthalmic Hospital, and Ophthalmic Surgeon at the Royal Free Hospital. She is a member of a number of ophthalmological societies in this country and abroad, and is a holder of the Nettleship, Doyne, Mackenzie, and Montgomery medals. Professor Mann has done important research on the details of ontogeny and phylogeny of the eye and the application of embryological principles to the elucidation and diagnosis of congenital abnormalities. She has also 3

investigated convergence deficiency and disorders of binocular vision. Recently she has been working in chemical lesions of the eye, and the effect on vision of certain nutritional disorders.

On November 3oth, 1944, at Winchester, FRANCES INA SAVORY, M.A., Headmistress of York College 1935-43. Student of the College 1914-17. Aged 49. On December 28th, 1944, at Clifton, Bristol, ETHEL MARY CHARLOTTE PRIDEAUX, Student of St. Hugh&#39;s Hall 1896-9. DIANA MARY LAMBERT (née GREY) A FRIEND writes : &#39;Diana was living in a cottage on her husband&#39;s estate in Surrey, doing all her own work including the care of her two little girls. When the siren went, she took them to the shelter and then went back to the house to attend to some saucepans she had left on the fire. The house had a direct hit and she must have been killed instantaneously. The children in the shelter were unharmed and are being cared for by some relations, as the father is serving abroad.&#39;

EDITOR&#39;S NOTE TT is hoped that it may be possible this year to send out printed forms with 1. requests for information and news of Senior Members. Meanwhile I shall be glad to receive any information which may be sent to me; change of address should be sent to the Principal&#39;s Secretary, St. Hugh&#39;s College, Holywell Manor, Oxford, and not to me. B. M. JALLAND. 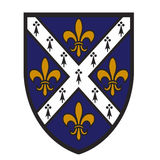