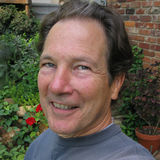 Todd was born in Detroit in 1947 where he attended Cass Technical High School. He was given a full scholarship to Pratt Institute in Brooklyn and received a BFA and MFA from Pratt. Todd lived and worked in New York City as a graphic designer and art director for 18 years. He moved to New Hampshire in 1981 and worked there as a freelance designer until 2004. He and his wife, Debbie currently live in Asheville, NC. Todd's photographs have been exhibited in galleries and museums in New York and New England and his graphic design work has been honored with numerous regional and national awards.