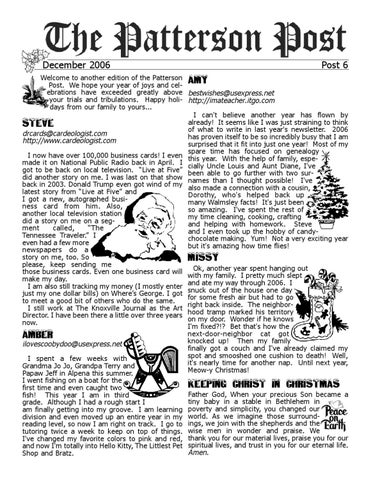 Welcome to another edition of the Patterson Amy Post. We hope your year of joys and celebrations have exceeded greatly above bestwishes@usexpress.net your trials and tribulations. Happy holi- http://imateacher.itgo.com days from our family to yours... I can&#39;t believe another year has flown by already! It seems like I was just straining to think STEVE of what to write in last year&#39;s newsletter. 2006 drcards@cardeologist.com has proven itself to be so incredibly busy that I am http://www.cardeologist.com surprised that it fit into just one year! Most of my spare time has focused on genealogy I now have over 100,000 business cards! I even this year. With the help of family, espemade it on National Public Radio back in April. I cially Uncle Louis and Aunt Diane, I&#39;ve got to be back on local television. “Live at Five” been able to go further with two surdid another story on me. I was last on that show names than I thought possible! I&#39;ve back in 2003. Donald Trump even got wind of my also made a connection with a cousin, latest story from “Live at Five” and Dorothy, who&#39;s helped back up I got a new, autographed busimany Walmsley facts! It&#39;s just been ness card from him. Also, so amazing. I&#39;ve spent the rest of another local television station my time cleaning, cooking, crafting did a story on me on a segand helping with homework. Steve ment called, “The and I even took up the hobby of candyTennessee Traveler.” I chocolate making. Yum! Not a very exciting year even had a few more but it&#39;s amazing how time flies! newspapers do a story on me, too. So MISSY please, keep sending me those business cards. Even one business card will Ok, another year spent hanging out with my family. I pretty much slept make my day. I am also still tracking my money (I mostly enter and ate my way through 2006. I just my one dollar bills) on Where’s George. I got snuck out of the house one day for some fresh air but had to go to meet a good bit of others who do the same. I still work at The Knoxville Journal as the Art right back inside. The neighborDirector. I have been there a little over three years hood tramp marked his territory on my door. Wonder if he knows now. I&#39;m fixed?!? Bet that&#39;s how the next-door-neighbor cat got AMBER knocked up! Then my family ilovescoobydoo@usexpress.net finally got a couch and I&#39;ve already claimed my spot and smooshed one cushion to death! Well, I spent a few weeks with it&#39;s nearly time for another nap. Until next year, Grandma Jo Jo, Grandpa Terry and Meow-y Christmas! Papaw Jeff in Alpena this summer. I went fishing on a boat for the keeping christ in christmas first time and even caught two Father God, When your precious Son became a fish! This year I am in third tiny baby in a stable in Bethlehem in grade. Although I had a rough start I am finally getting into my groove. I am learning poverty and simplicity, you changed our division and even moved up an entire year in my world. As we imagine those surroundreading level, so now I am right on track. I go to ings, we join with the shepherds and the tutoring twice a week to keep on top of things. wise men in wonder and praise. We I&#39;ve changed my favorite colors to pink and red, thank you for our material lives, praise you for our and now I&#39;m totally into Hello Kitty, The Littlest Pet spiritual lives, and trust in you for our eternal life. Amen. Shop and Bratz.

the origin of rudolph the red-nosed reindeer

the hidden meaning of the twelve days of christmas

In 1939, Robert May an advertising copywriter for, the Montgomery Ward department store in Chicago sought something novel for its Santa Claus to distribute to parents and children. May conceived the idea of a shiny-nosed reindeer, a Santa&#39;s helper. And an artist friend, Denver Gillen, spent hours at a local zoo creating whimsical sketches of reindeer at rest and at play. May considered many names and finally settled on Rudolph, the preference of his four-year-old daughter. That Christmas of 1939, 2.4 million copies of the &quot;Rudolph&quot; booklet were handed out in Montgomery Ward stores across the country. &quot;Rudolph&quot; was reprinted as a Christmas booklet sporadically until 1947. That year, a friend of May&#39;s, Johnny Marks, decided to put the poem to music. One professional singer after another declined the opportunity to record the song, but in 1949, Gene Autry consented. The Autry recording rocketed to the top of the Hit Parade. Since then, three hundred different recordings have been made, and more than eighty million records sold. The original Gene Autry version is second only to Bing Crosby&#39;s &quot;White Christmas&quot; as the best-selling record of all time. Rudolph became an annual television star, and a familiar Christmas image in many of the countries whose own lore had enriched the international St. Nicholas legend.

People often seem to think of The Twelve Days of Christmas as the days preceding the festival. As you may be aware, actually Christmas is a season of the Christian Year that lasts for days beginning December 25 and through January 6 -- the Day of Epiphany when the church celebrates the revelation of Christ as the light of the world and recalls the journey of the Magi. From 1558 until 1829 Roman Catholics in England were not allowed to practice their faith openly. During that era someone wrote â&amp;#x20AC;&amp;#x2DC;The Twelve Days of Christmas&#39; as a kind of secret catechism that could be sung in public without risk of persecution. The song has two levels of interpretation: the surface meaning plus a hidden meaning known only to members of the church. Each element in the carol is a code word for a religious reality. 1. The partridge in a pear tree is Jesus Christ. 2. The two turtledoves are the Old and New Testaments. 3. Three French hens stand for faith, hope and love. 4. The four calling birds are the four Gospels. 5. The five gold rings recall the torah (Law) the first five books of the Old Testament. 6. The six geese a-laying stand for the six days of creation. 7. Seven swans a-swimming represent the sevenfold gifts of the Spirit. 8. The eight maids a-milking are the eight beatitudes. 9. Nine ladies dancing are the nine fruits of the spirit (Gal.5). 10. The ten lords a-leaping are the Ten Commandments. 11. Eleven pipers piping stand for the eleven faithful disciples. 12. Twelve drummers drumming symbolize the 12 points of belief in the Apostles Creed.

PREP TIME: 20 Mins. COOK TIME: 8 Mins. READY IN: 6 Hrs. 28 Mins. DIRECTIONS: Combine milk, cloves, 1/2 teaspoon vanilla, and cinnamon in a saucepan, and heat over lowest setting for 5 minutes. Slowly bring milk mixture to a boil. In a large bowl, combine egg yolks and sugar. Whisk together until fluffy. Whisk hot milk mixture slowly into the eggs. Pour mixture into saucepan. Cook over medium heat, stirring constantly for 3 minutes, or until thick. Do not allow mixture to boil. Strain to remove cloves, and let cool for about an hour. Stir in rum, cream, 2 teaspoon vanilla, and nutmeg. Refrigerate overnight http://www.allrecipes.com before serving. 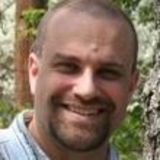