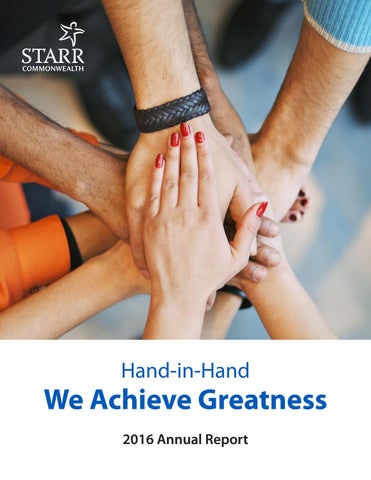 A Letter From Our Leaders As we continue to look forward to our next 100 years and assess the growing needs of children, families, and communities, we remain rooted in our past, confident in our present path forward, and inspired by the bright future that lays ahead.

On a daily basis, we watch residents walk across our beautiful Albion campus to class, building strength every step of the way to overcome the trauma they have experienced. We see professionals visit the homes and schools of our families across Michigan, providing a suite of care that builds strength in not only individuals, but households. And we observe our Starr Global Learning Network team travel the world to share the power of our key programs: The National Institute for Trauma and Loss in Children (TLC), Glasswing, and Reclaiming Youth Internationalâ&#x20AC;&#x2122;s (RYI) Circle of Courage, providing new tools to build resilience in our schools and communities. Just outside our windows, all of this positive change is unfolding every day, and in many powerful ways. It is incredibly gratifying to know that children, families, and communities are receiving the great care they need, and to know that we continue to play an integral role in their transformation. We could not accomplish all of this great work alone, though. It is with great thanks to the dedication of our staff, board of directors, generous supporters and volunteers, and most of all, you, that we can continue to bring about such positive change. Your power and compassion continues to fuel the great work we are so proud of, and we hope that same swell of pride fills you too. As a community of care providers, we know more tough experiences and decisions are certain to come. But, if we remain hand-in-hand and steadfast with our mission, we know there is no obstacle we cannot overcome today, tomorrow, or the next. Your continued support makes us believe in that more than ever, and once again, we thank you for believing in the greatness of children, families, and communities.

Building positive relationships and breaking through trauma, Starr’s residential program provides the environment and support necessary to unlock the greatness in each of our residents. Serving 253 children from around the country, 12-18 years of age, with love and respect, Uncle Floyd’s mission is as strong as ever. As a student in our residential program, children receive a formal education, individual and group counseling, service learning experiences, and a series of tools to deescalate and process conflict and trauma. Specialized programs serve residents in the following categories: • Juvenile Justice • Sexually Reactive Youth • Substance Abuse

Training over 200 professionals per month in 34 cities and 5 countries around the world, SGLN is a fast growing and highly effective educational system. Through sharing Starr’s National Institute for Trauma and Loss in Children (TLC), Glasswing (racial healing), and Reclaiming Youth International (RYI) Circle of Courage programs with educators, administrators, law enforcement, and professionals, our 103 years of knowledge and research is reaching a global audience, and our mission of creating positive environments where children and communities can flourish is resonating louder than ever. When asked to rate the quality of services, SGLN participants gave our educational programs a 4.5, with 5 meaning ‘extremely beneficial’. This strong response reinforces the power of our work and its ability to bring about positive change.

Starr PsychSystems provides psychological and community-based services to support individuals and families with intellectual and developmental disabilities, such as Autism diagnostic assessments, behavioral analysis, and best practice interventions. Care is provided both in-home and at our Autism Center, ensuring a flexible care system that meets the needs of all 1,702 adults and children served.

Serving 289 youth and families, our Detroit programs provide individual and group session counseling, substance abuse services, enrichment and tutoring, foster care, and supervised independent living. These programs provide safety and permanency for abused and neglected children, and reduce out of home placements for youth with problematic behavior with a holistic system of care to prevent recidivism. Clients are referred through families, churches, school, counties and courts.

The good work of Starr Commonwealth would not be possible without many friends giving at all levels during their lifetime and beyond. Starr Commonwealth’s Champions for Children recognition society was created to recognize this support and celebrate those who help us transform the lives of troubled children and families. All cost associated with our three stewardship programs are underwritten by special friends who join us in saying, “Thank you for caring!”

“There are no disposable kids.” Named after Starr Commonwealth’s President Emeritus, this recognition society remembers our history as a working dairy farm, and symbolizes our work of nurturing children’s bodies, minds, and spirits. Each bottle represents $2,500 of accumulated gifts to Starr Commonwealth. Receiving eight bottles represents total accumulated giving of $20,000 or more. The following donors reached the next level of accumulated giving and qualify for new milk bottles in the 2015-16 fiscal year. MILK BOTTLE 1 - Summary of Gifts $2,500 - $4,999

Floyd Starr Founder’s Circle “There’s no such thing as a bad child.”

We are grateful to have received gifts from the estates of these loyal friends during the 2015-16 fiscal year. Estate of J. Allen and Marge Bassage Fitch H. Beach Charitable Foundation Estate of Jean Bretzel Estate of Helen M. Brown Estate of Neillie J. Drake Estate of Elsie Eggebrecht Eugene B. Hamilton Trust Estate of Clarence W. Harris Estate of Zita Harris Estate of Judith A. Hill Estate of Thelma B. Johnson Estate of Richard G. Knapp Estate of David and Betty Lou Levene Estate of Bess (Betty) Maddox

We are pleased to recognize our friends who created a Charitable Gift Annuity during the 2015-16 fiscal year. Mr. and Mrs. Dallas Seiler

Donor Spotlight The Starr Leadership Challenge To close out the fiscal year with a bang, our President and Chief Executive Officer Elizabeth Carey teamed up with former CEOs Larry Brendtro, Arlin Ness, Martin Mitchell, and a number of other current leaders of the organization, to extend a special challenge to everyone connected to Starr – for every donation made before the end of the fiscal year, they would MATCH all gifts up to a total of $25,000! In a little over a two-month period, Starr staff and supporters took the challenge to heart, and were able to meet and exceed the match limit, delivering a total of $50,658.13 raised for the organization (matching funds included)! General funds such as those raised through the Starr Leadership Challenge are critical for the successful implementation and execution of summer reading programs, tutoring and academic enrichment activities, the purchase of personal products and back to school items for our youth, and so much more. These support programs and supplies, in tandem with the many other great services we provide, seek to increase the continuum of care needed in our communities, empowering even more children and improving their lives, every step of the way.

Building Tomorrow’s Leaders and an Inclusive Future This August, Starr partnered with Albion College to host the 2016 Student Leadership Symposium. Started in 2013 with the merging of the Albion and Marshall high schools, this event is designed to bring the students from both areas together in an effort to help them work collectively, build relationships, and foster a positive peer climate for the upcoming school year. Open to middle school students in grades 6-8, this year’s fourth annual symposium focused on the ideas of “Oneness” and “Implicit Bias”. With over 50 attendees, leaders showed students how, once we recognize our biases, we are able to effectively create a more diverse and inclusive world, and how this lesson will help them throughout their high school career and every chapter that follows.

Students participated in problem solving and group learning activities, as well as recreational endeavors to help build friendships. There was also a segment of the day dedicated to learning the history of Marshall and Albion, as well as Starr Commonwealth and Albion College, where the day’s activities were held. Several of the events were led by students who had experienced the Youth Symposium in previous years. These students, now high school seniors and college freshmen, understood the need for future generations to learn to coexist peacefully, and worked to bridge the gaps they saw between students from different communities. 10

Total 30,937 * Pie Chart above does not include Nonrecurring Costs

Notes: *Non-operating and other income consists of interest, dividends, and  capital gains & losses net of investment income appropriated for  operations, and pension related changes.  This is an unaudited summary financial report.  A complete audited report, including the opinion of independent certified public accountants  is available upon request.  11

We can always use another set of hands. 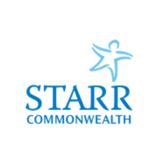