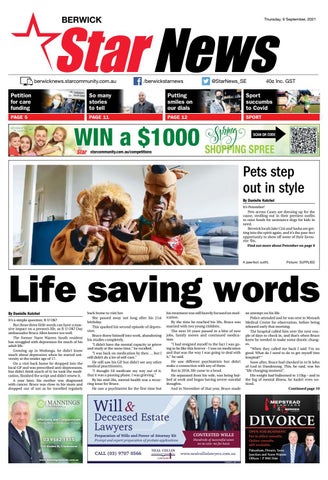 So many stories to tell

Putting smiles on our dials

Pets step out in style By Danielle Kutchel It’s Petember! Pets across Casey are dressing up for the cause, strolling out in their prettiest outfits to raise funds for assistance dogs for kids in need. Berwick locals Jake Cini and Sasha are getting into the spirit again, and it’s the paw-fect opportunity to show off some of their favourite ’fits. Find out more about Petember on page 9

Life saving words It’s a simple question: R U OK? But those three little words can have a massive impact on a person’s life, as R U OK? Day ambassador Bruce Allen knows too well. The former Narre Warren South resident has struggled with depression for much of his adult life. Growing up in Wodonga, he didn’t know much about depression when he started university at the tender age of 17. On a visit back home he dropped into the local GP and was prescribed anti-depressants, but didn’t think much of it; he took the medication, finished the script and didn’t renew it. A year later, his mother was diagnosed with cancer. Bruce was close to his mum and dropped out of uni as he travelled regularly

back home to visit her. She passed away not long after his 21st birthday. This sparked his second episode of depression. Bruce threw himself into work, abandoning his studies completely. “I didn’t have the mental capacity to grieve and study at the same time,” he recalled. “I was back on medication by then … but I still didn’t do a lot of self-care.” He still saw his GP, but didn’t see any other medical practitioners. “I thought I’d medicate my way out of it, that it was a passing phase, I was grieving.” By his mid-20s, mental health was a recurring issue for Bruce. He saw a psychiatrist for the first time but

his treatment was still heavily focused on medication. By the time he reached his 30s, Bruce was married with two young children. The next 10 years passed in a blur of new jobs, family moves and continued medication. “I had resigned myself to the fact I was going to be like this forever - I was on medication and that was the way I was going to deal with it,” he said. He saw different psychiatrists but didn’t make a connection with any of them. But in 2018, life came to a head. He separated from his wife, was being bullied at work and began having severe suicidal thoughts. And in November of that year, Bruce made

an attempt on his life. Police attended and he was sent to Monash Medical Centre for observation, before being released early that morning. The hospital called him over the next couple of days to check in, and that’s when Bruce knew he needed to make some drastic changes. “When they called me back I said ‘I’m no good. What do I need to do to get myself into hospital?’” Soon after, Bruce had checked in to St John of God in Dandenong. This, he said, was his “life changing moment”. His weight had ballooned to 115kg – and in the fog of mental illness, he hadn’t even noticed. Continued page 10 12497981-NG23-21

Will & Affordable and Compassionate

Serving Melbourne for over 75 years

Preparation of Wills and Power of Attorney Kit

Hundreds of successful cases on no win–no fee basis