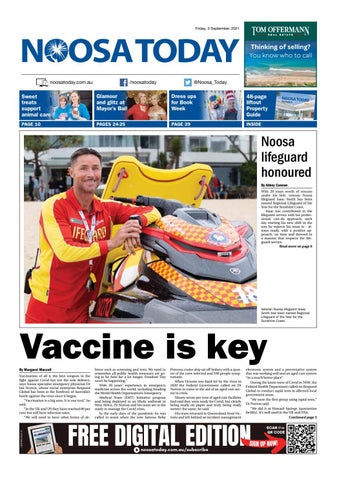 Glamour and glitz at Mayor’s Ball

Noosa lifeguard honoured By Abbey Cannan With 20 years worth of rescues under his belt, veteran Noosa lifeguard Isaac Smith has been named Regional Lifeguard of the Year for the Sunshine Coast. Isaac has contributed to the lifeguard service with his professional, can-do approach, each day starting his new shift in the way he expects his team to - always ready, with a positive approach, on time and dressed in a manner that respects the lifeguard service. Read more on page 6

Veteran Noosa lifeguard Isaac Smith has been named Regional Lifeguard of the Year for the Sunshine Coast.

Vaccine is key By Margaret Maccoll

Vaccination of all is the best weapon in the fight against Covid but not the sole defence, says Noosa specialist emergency physician Dr Ian Norton, whose social enterprise Respond Global has been at the forefront of Australia’s battle against the virus since it began. “Vaccination is a big area. It is one tool,” he said. “In the UK and US they have reached 80 per cent but still have infection rates. “We will need to have other forms of de-

fence such as screening and tests. We need to remember all public health measures are going to be here for a lot longer. Freedom Day won’t be happening.” With 20 years’ experience in emergency medicine across the world, including heading the World Health Organisation’s Emergency Medical Team (EMT) Initiative program and being deployed to an Ebola outbreak in West Africa, Dr Norton and his team are at the ready to manage the Covid crisis. In the early days of the pandemic he was called to assist when the now famous Ruby

Princess cruise ship sat off Sydney with a quarter of the crew infected and 100 people symptomatic. When Victoria was hard hit by the virus in 2020 the Federal Government called on Dr Norton to come to the aid of an aged care sector in crisis. Ninety-seven per cent of aged care facilities had said they were ready for Covid, but clearly being ready on paper and truly being ready weren’t the same, he said. His team returned to Queensland from Victoria and left behind an incident management

electronic system and a preventative system that was working well and an aged care system “in a much better place”. During the latest wave of Covid in NSW, the Federal Health Department called on Respond Global to conduct rapid tests in affected local government areas. “We were the first group using rapid tests,” Dr Norton said. “We did it at Howard Springs [quarantine facility]. It’s well used in the UK and USA. Continued page 3