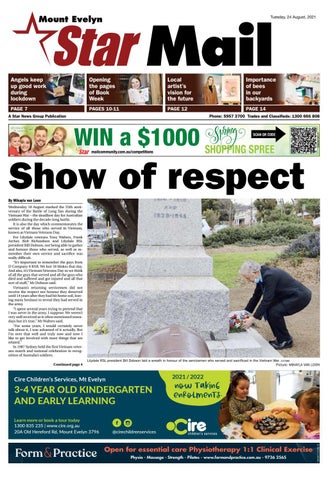 Opening the pages of Book Week

Local artist’s vision for the future

Importance of bees in our backyards

Show of respect By Mikayla van Loon Wednesday 18 August marked the 55th anniversary of the Battle of Long Tan during the Vietnam War – the deadliest day for Australian soldiers during the decade-long battle. It is also the day which commemorates the service of all those who served in Vietnam, known as Vietnam Veterans Day. For Lilydale veterans Tony Walters, Frank Archer, Bob Richardson and Lilydale RSL president Bill Dobson, not being able to gather and honour those who served, as well as remember their own service and sacrifice was really difficult. “It’s important to remember the guys from D Company 6 RAR. We lost 18 blokes that day. And also, it’s Vietnam Veterans Day so we think of all the guys that served and all the guys who died and suffered and got injured and all that sort of stuff,” Mr Dobson said. Vietnam’s returning servicemen did not receive the respect nor honour they deserved until 14 years after they had hit home soil, leaving many hesitant to reveal they had served in the army. “I spent several years trying to pretend that I was never in the army, I suppose. We weren’t very well received as is often mentioned nowadays but it’s true,” Mr Walters said. “For some years, I would certainly never talk about it, I was ashamed of it actually. But I’m over that well and truly now and now I like to get involved with most things that are related.” In 1987 Sydney held the first Vietnam veterans march and national celebration in recognition of Australia’s soldiers. Lilydale RSL president Bill Dobson laid a wreath in honour of the servicemen who served and sacrificed in the Vietnam War. 247986 Picture: MIKAYLA VAN LOON