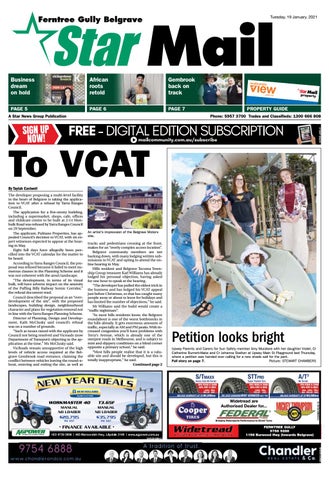 Mail Gembrook back on track PAGE 7

To VCAT By Taylah Eastwell

An artist’s impression of the Belgrave Motors site.

Widetread are Authorised Dealer for...

trucks and pedestrians crossing at the front, makes for an “overly complex access location”. Belgrave community members are not backing down, with many lodging written submissions to VCAT and opting to attend the online hearing in May. Hills resident and Belgrave Tecoma Township Group treasurer Karl Williams has already lodged his personal objection, having asked for one hour to speak at the hearing. “The developer has pulled the oldest trick in the business and has lodged his VCAT appeal just before Christmas, so that has caught many people away or about to leave for holidays and has limited the number of objections,” he said. Mr Williams said the build would create a “traffic nightmare”. “As most hills residents know, the Belgrave roundabout is one of the worst bottlenecks in the hills already. It gets enormous amounts of traffic, especially at AM and PM peaks. With increased congestion you’ll have problems with Terry’s Avenue, which is already one of the steepest roads in Melbourne, and is subject to mist and slippery conditions on a blind corner opposite a primary school,” he said. “Most hills people realise that it is a valuable site and should be developed, but this is totally inappropriate,” he said. Continued page 2

The developer proposing a multi-level facility in the heart of Belgrave is taking the application to VCAT after a refusal by Yarra Ranges Council. The application for a five-storey building, including a supermarket, shops, cafe, offices and childcare centre to be built at 2-14 Monbulk Road was refused by Yarra Ranges Council on 29 September. The applicant, Pulitano Properties, has appealed Council’s decision to VCAT, with six expert witnesses expected to appear at the hearing in May. Eight full days have allegedly been pencilled into the VCAT calendar for the matter to be heard. According to Yarra Ranges Council, the proposal was refused because it failed to meet numerous clauses in the Planning Scheme and it was not coherent with the area’s landscape. “The development, in terms of its visual bulk, will have adverse impact on the amenity of the Puffing Billy Railway Scenic Corridor,” the refusal document read. Council described the proposal as an “overdevelopment of the site”, with the proposed landscapes, building design, neighbourhood character and plans for vegetation removal not in line with the Yarra Ranges Planning Scheme. Director of Planning, Design and Development, Kath McClusky said council’s refusal was on a number of grounds. “Such as issues raised with the applicant by Council not being resolved and Vicroads (now Department of Transport) objecting to the application at the time,” Ms McClusky said. VicRoads remain unsupportive of the high levels of vehicle access required at the Belgrave Gembrook road entrance, claiming the conflict between vehicles leaving the round-about, entering and exiting the site, as well as