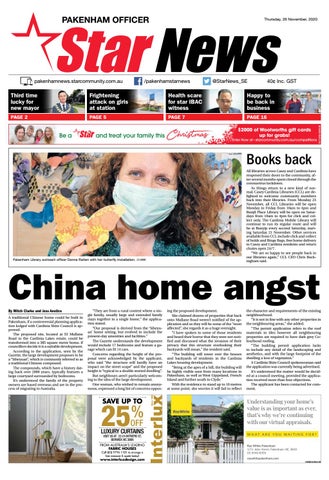 Frightening attack on girls at station

Happy to be back in business

and treat your family this

$2000 of Woolworths gift cards up for grabs! Enter Now at - starcommunity.com.au/competitions

Books back All libraries across Casey and Cardinia have reopened their doors to the community, after several months spent closed through the coronavirus lockdown. As things return to a new kind of normal, Casey Cardinia Libraries (CCL) are delighted to welcome community members back into their libraries. From Monday 23 November, all CCL Libraries will be open Monday to Friday from 10am to 4pm and Bunjil Place Library will be open on Saturdays from 10am to 4pm for click and collect only. The Cardinia Mobile Library will continue to run its regular route and will be at Bunyip every second Saturday, starting Saturday 21 November. Other services available from CCL include click and collect of holds and Binge Bags, free home delivery to Casey and Cardinia residents and return chutes open 24/7. “We are so happy to see people back in our libraries again,” CCL CEO Chris Buckingham said.

A traditional Chinese home could be built in Pakenham, if a controversial planning application lodged with Cardinia Shire Council is approved. The proposed site, located at 55 Mullane Road in the Cardinia Lakes estate, could be transformed into a 385 square metre home, if councillors decide it is a suitable development. According to the application, seen by the Gazette, the large development proposes to be a “Siheyuan”, which is commonly referred to as a traditional Chinese compound. The compounds, which have a history dating back over 2000 years, typically features a large courtyard surrounded by bedrooms. It’s understood the family of the property owners are based overseas and are in the process of migrating to Australia.

“They are from a rural context where a single family, usually large and extended family stays together in a single home,” the application stated. “Our proposal is derived from the ‘Siheyuan’ home setting, but evolved to include the present-day amenities and facilities.” The Gazette understands the development would include 17 bedrooms and feature a garage which can fit 14 cars. Concerns regarding the height of the proposal were acknowledged by the applicant, who said “the structure will hardly have an impact on the street scape” and the proposed height is “typical to a double storied dwelling”. But neighbours aren’t particularly welcoming to the idea of the large development. One woman, who wished to remain anonymous, expressed a long list of concerns opposSince 1989

By Mitch Clarke and Jess Anstice

ing the proposed development. She claimed dozens of properties that back onto Mullane Road weren’t notified of the application and as they will be some of the “most affected”, she regards it as a huge oversight. “I have spoken to some of those residents and heard their horror that they were not notified and discussed what the invasion of their privacy that this structure overlooking their backyards will mean,” the resident said. “The building will tower over the houses and backyards of residents in the Cardinia Lakes housing development. “Being at the apex of a hill, the building will be highly visible seen from many locations in Pakenham, as well as West Gippsland, French Island and further south to Clyde.” With the residence to stand up to 10 metres at some point, she worries it will fail to reflect

the character and requirements of the existing neighbourhood. “It is not in line with any other properties in the neighbouring areas,” she added. “The permit application refers to the roof materials in tiles however all neighbouring properties are required to have dark grey Colourbond roofing. “The building permit application lacks to include any detail of the landscaping and aesthetics, and with the large footprint of the dwelling a loss of vegetation.” A Cardinia Shire Council spokeswoman said the application was currently being advertised. It’s understood the matter would be decided at a council meeting, provided the application received more than four objections. The applicant has been contacted for comment.

Understanding your home’s value is as important as ever, that’s why we’re continuing with our virtual appraisals. W H AT A R E YO U WA I T I N G F O R ?