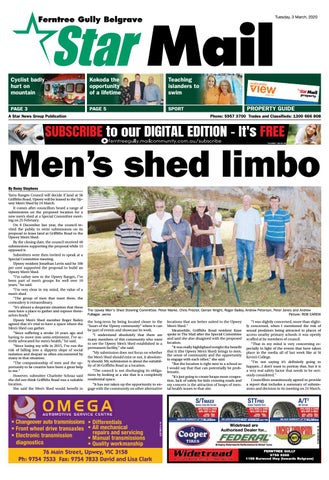 Kokoda the opportunity of a lifetime

The Upwey Men's Shed Steering Committee. Peter Marke, Chris Procter, Gerran Wright, Roger Bailey, Andrew Peterson, Peter Jones and Andrew Picture: ROB CAREW Fullagar. 189793 the long-term by being located closer to the “heart of the Upwey community” where it can be part of events and showcase its work. “I understand absolutely that there are many members of this community who want to see the Upwey Men’s Shed established in a permanent facility,” she said. “My submission does not focus on whether the Men’s Shed should exist or not, it absolutely should. My submission is about the suitability of 56 Griffiths Road as a location. “The council is not discharging its obligations by looking at a site that is a completely residential space. “It has not taken up the opportunity to engage with the community on other alternative

locations that are better suited to the Upwey Men’s Shed.” Meanwhile, Griffiths Road resident Kaye spoke to The Mail after the Special Committee and said she also disagreed with the proposed location. “It was really highlighted tonight the benefit that it (the Upwey Men’s Shed) brings to men, the sense of community and the opportunity to engage with each other,” she said. “But the location is right next to a school so I would say that that can potentially be problematic. “It’s just going to create heaps more congestion, lack of safety for kids crossing roads and my concern is the attraction of heaps of mental health issues to that site.

“I was slightly concerned, more than slightly concerned, when I mentioned the risk of sexual predators being attracted to places of access nearby primary schools it was openly scoffed at by members of council. “That in my mind is very concerning especially in light of the events that have taken place in the media all of last week like at St Kevin’s College. “I’m not saying it’s definitely going to happen...I don’t want to portray that, but it is a very real safety factor that needs to be seriously considered.” Councillors unanimously agreed to provide a report that includes a summary of submissions and decision to its meeting on 24 March.

Widetread are Authorised Dealer for...

Yarra Ranges Council will decide if land at 56 Griffiths Road, Upwey will be leased to the Upwey Men’s Shed by 24 March. It comes after councillors heard a range of submissions on the proposed location for a new men’s shed at a Special Committee meeting on 25 February. On 9 December last year, the council invited the public to write submissions on its proposal to lease land at Griffiths Road to the Upwey Men’s Shed. By the closing date, the council received 48 submissions supporting the proposal while 15 opposed it. Submitters were then invited to speak at a Special Committee meeting. Upwey resident Jonathan Levin said he 100 per cent supported the proposal to build an Upwey Men’s Shed. “I’m rather new to the Upwey Ranges, I’ve been part of men’s groups for well over 10 years,” he said. “I’m very clear in my mind, the value of a men’s shed. “The group of men that meet there, the comradery is extraordinary. “It’s almost a desperate situation that these men have a place to gather and express themselves freely.” Upwey Men’s Shed member Roger Bailey agreed that it’s vital to have a space where the Men’s Shed can gather. “Since suffering a stroke 10 years ago and having to move into semi-retirement, I’ve actively advocated for men’s health,” he said. “Since losing my wife in 2015, I’ve run the risk of falling into a slippery slope of social isolation and despair so often encountered by many in that situation. “The companionship of men and the opportunity to be creative have been a great help to me.” However, submitter Charlotte Schraa said she did not think Griffiths Road was a suitable location. She said the Men’s Shed would benefit in