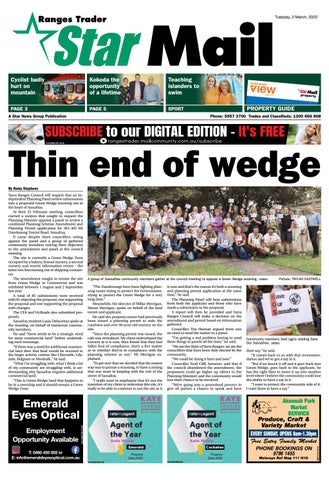 Kokoda the opportunity of a lifetime

A group of Sassafras community members gather at the council meeting to oppose a Green Wedge rezoning. 205561 “The Dandenongs have been fighting planning issues trying to protect the environment, trying to protect the Green Wedge for a very long time.” Meanwhile, the director of Millar Merrigan, Simon Merrigan, spoke on behalf of the land owner and applicant. He said the property owner had previously been issued a planning permit to redo the rundown and over 50-year-old nursery on the site. “Since the planning permit was issued, the cafe was revitalised. My client redeveloped the nursery as it is now, then found that they had fallen foul of compliance, that’s a live matter as to whether they’re in compliance with the planning scheme or not,” Mr Merrigan explained. “To get over that we decided that the easiest way was to pursue a rezoning, to have a zoning that was more in keeping with the rest of the street of Sassafras. “I really want to emphasise that it’s not the intention of my client to redevelop this site, it’s really to be able to continue to use the site as it

is now and that’s the reason it’s both a rezoning and planning permit application at the same time,” he said. The Planning Panel will hear submissions from both the applicant and those who have made a submission to the proposal. A report will then be provided and Yarra Ranges Council will make a decision on the amendment and permit based on information gathered. Councillor Tim Heenan argued there was no need to send the matter to a panel. “I’m getting a real problem having to send these things to panels all the time,” he said. “We are the Shire of Yarra Ranges, we are the councillors that have been duly elected by the community. “We could be doing it here and now.” Councillor Noel Cliff, however, said that if the council abandoned the amendment, the proponent could go higher up (direct to the Planning Minister) and the community would lose their chance to be involved. “We’re going into a procedural process to give all parties a chance to speak and have

Community members held signs reading Save Our Sassafras. 205561 their say,” he said. “It comes back to us with that recommendation and we’ve got a say in it. “But if we knock it off and it goes back into Green Wedge, goes back to the applicant, he has the right then to move it up into another level where I believe the community could lose the ability to have a say in it. “I want to protect the community side of it. I want them to have a say.”

Yarra Ranges Council will request that an Independent Planning Panel review submissions into a proposed Green Wedge rezoning site in the heart of Sassafras. At their 25 February meeting, councillors carried a motion that sought to request the Planning Minister appoint a panel to review a combined Planning Scheme Amendment and Planning Permit application for 361-365 Mt Dandenong Tourist Road, Sassafras. It came despite three councillors voting against the panel and a group of gathered community members voicing their objection to the amendment and panel at the council meeting. The site is currently a Green Wedge Zone occupied by a bakery, bonsai nursery, a second nursery and tourist information centre - the latter two functioning out of shipping containers. The amendment sought to rezone the site from Green Wedge to Commercial and was exhibited between 1 August and 2 September last year. A total of 85 submissions were received with 81 objecting the proposal, one supporting the proposal and one supporting the proposal with changes. The CFA and VicRoads also submitted proposals. Sassafras resident Louis Delacretaz spoke at the meeting, on behalf of numerous community members. He said “there needs to be a strategic need for more commercial land” before undertaking such rezonings. “If there was a need for additional commercial land then that land would be rezoned in the larger activity centres like Chirnside, Lilydale, Belgrave or Monbulk,” he said. “What I’m struggling with, what I think a lot of my community are struggling with, is understanding why Sassafras requires additional commercial land. “This is Green Wedge land that happens to be in a township and it should remain a Green Wedge Zone.