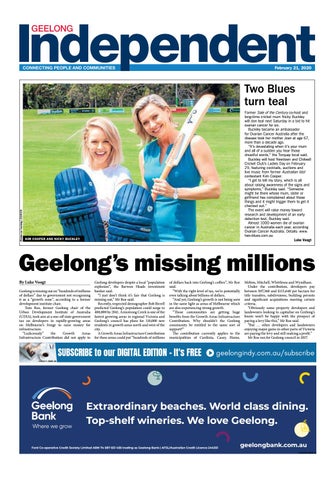 Two Blues turn teal Former Sale of the Century co-host and long-time cricket mum Nicky Buckley will don teal next Saturday in a bid to hit ovarian cancer for six. Buckley became an ambassador for Ovarian Cancer Australia after the disease took her mother Joan at age 67, more than a decade ago. “It’s devastating when it’s your mum and all of a sudden you hear those dreadful words,” the Torquay local said. Buckley will host Newtown and Chilwell Cricket Club’s Ladies Day on February 29, featuring cocktails, auctions and live music from former Australian Idol contestant Kim Cooper. “I get to tell my story, which is all about raising awareness of the signs and symptoms,” Buckley said. “Someone might be there whose mum, sister or girlfriend has complained about those things and it might trigger them to get it checked out.” The event will raise money toward research and development of an early detection test, Buckley said. Almost 1000 women die of ovarian cancer in Australia each year, according Ovarian Cancer Australia. Details: www. two-blues.com.au Luke Voogt

Geelong’s missing millions By Luke Voogt Geelong is missing out on “hundreds of millions of dollars” due to government not recognising it as a “growth zone”, according to a former development institute chair. Tom Roe, former Geelong chair of the Urban Development Institute of Australia (UDIA), took aim at a one-of state government tax on developers in rapidly-growing areas on Melbourne’s fringe to raise money for infrastructure. “Ludicrously” the Growth Areas Infrastructure Contribution did not apply to

Geelong developers despite a local “population explosion”, the Barwon Heads investment banker said. “I just don’t think it’s fair that Geelong is missing out,” Mr Roe said. Recently, respected demographer Bob Birrell predicted Geelong’s population could surge to 400,000 by 2041. Armstrong Creek is one of the fastest growing areas in regional Victoria and Geelong’s council has plans for 110,000 new residents in growth areas north and west of the city. A Growth Areas Infrastructure Contribution for these areas could put “hundreds of millions

of dollars back into Geelong’s cofers”, Mr Roe said. “With the right level of tax, we’re potentially even talking about billions of dollars. “And yet, Geelong’s growth is not being seen in the same light as areas of Melbourne which are also experiencing strong growth. “hose communities are getting huge beneits from the Growth Areas Infrastructure Contribution. Why shouldn’t the Geelong community be entitled to the same sort of support?” he contribution currently applies to the municipalities of Cardinia, Casey, Hume,

Melton, Mitchell, Whittlesea and Wyndham. Under the contribution, developers pay between $97,360 and $115,640 per hectare for title transfers, subdivisions, building permits and signiicant acquisitions meeting certain criteria. “Obviously some property developers and landowners looking to capitalise on Geelong’s boom won’t be happy with the prospect of paying a levy like this,” Mr Roe said. “But … other developers and landowners enjoying major gains in other parts of Victoria are paying the levy and still making a proit.” Mr Roe ran for Geelong council in 2017.