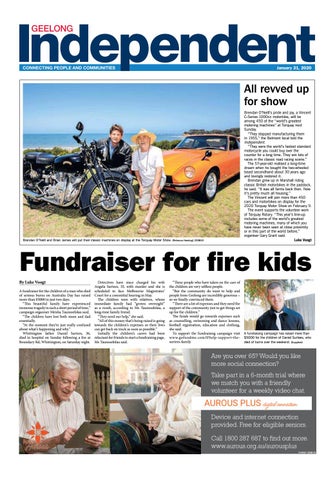 All revved up for show Brendan O’Neill’s pride and joy, a Vincent C-Series 1000cc motorbike, will be among 450 of the “world’s greatest motoring machines” at Torquay next Sunday. “They stopped manufacturing them in 1955,” the Belmont local told the Independent. “They were the world’s fastest standard motorcycle you could buy over the counter for a long time. They win lots of races in the classic road racing scene.” The 57-year-old realised a long-time dream when he bought the two-wheeled beast secondhand about 30 years ago and lovingly restored it. Brendan grew up in Marshall riding classic British motorbikes in the paddock, he said. “It was all farms back then. Now it’s pretty much all housing.” The Vincent will join more than 450 cars and motorbikes on display for the 2020 Torquay Motor Show on February 9. The event supports the volunteer work of Torquay Rotary. “This year’s line-up includes some of the world’s greatest motoring machines, many of which you have never been seen at close proximity or in this part of the world before,” organiser Gary Grant said. Luke Voogt

Brendan O’Neill and Brian James will put their classic machines on display at the Torquay Motor Show. (Rebecca Hosking) 203810

Fundraiser for ire kids By Luke Voogt A fundraiser for the children of a man who died of serious burns on Australia Day has raised more than $5000 in just two days. “his beautiful family have experienced immense tragedy in such a short period of time,” campaign organiser Meisha Taumoefolau said. “he children have lost both mum and dad essentially. “At the moment they’re just really confused about what’s happening and why.” Whittington father Daniel Surtees, 36, died in hospital on Sunday following a ire at Boundary Rd, Whittington, on Saturday night.

Detectives have since charged his wife Angela Surtees, 33, with murder and she is scheduled to face Melbourne Magistrates’ Court for a committal hearing in May. he children were with relatives, whose immediate family had “grown overnight” as a result, according to Ms Taumoefolau, a long-time family friend. “hey need our help,” she said. “All of this money that’s being raised is going towards the children’s expenses so their lives can get back on track as soon as possible.” Initially the children’s carers had been reluctant for friends to start a fundraising page, Ms Taumoefolau said.

“hese people who have taken on the care of the children are very selless people. “But the community do want to help and people from Geelong are incredibly generous – so we inally convinced them. “here are a lot of expenses and they need the support of the community just to get things set up for the children.” he funds would go towards expenses such as counselling, swimming and dance lessons, football registration, education and clothing, she said. To support the fundraising campaign visit www.gofundme.com/f/help-support-thesurtees-family

A fundraising campaign has raised more than $5000 for the children of Daniel Surtees, who died of burns over the weekend. (Supplied)

Are you over 65? Would you like more social connection? Take part in a 6-month trial where we match you with a friendly volunteer for a weekly video chat.