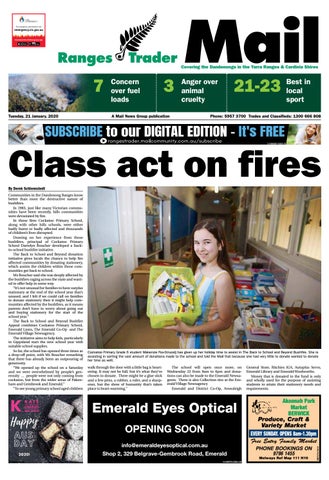 Cockatoo Primary Grade 6 student Makenzie Fox-Strucelj has given up her holiday time to assist in The Back to School and Beyond Bushfire. She is assisting in sorting the vast amount of donations made to the school and told the Mail that because she had very little to donate wanted to donate her time as well. walk through the door with a little bag is heartening. It may not be full, but it’s what they’ve chosen to donate. There might be a glue stick and a few pens, a rubber, a ruler, and a sharpener, but the show of humanity that’s taken place is heart-warming.”

The school will open once more, on Wednesday 22 from 9am to 6pm and donations can also be made to the Emerald Newsagents. There is also Collection tins at the Emerald Village Newsagency Emerald and District Co-Op, Avonsleigh

General Store, Ritchies IGA, Autoplus Servo, Emerald Library and Emerald Woolworths. Money that is donated to the fund is only and wholly used for the purpose of assisting students to attain their stationery needs and requirements.

Communities in the Dandenong Ranges know better than most the destructive nature of bushfires. In 1983, just like many Victorian communities have been recently, hills communities were devastated by fire. In those fires Cockatoo Primary School, along with other hills schools, were either badly burnt or badly affected and thousands of children’s lives disrupted. Drawing on her experience from those bushfires, principal of Cockatoo Primary School Darrelyn Boucher developed a backto-school bushfire initiative. The Back to School and Beyond donation initiative gives locals the chance to help fire affected communities by donating stationery, which assists the children within those communities get back to school. Ms Boucher said she was deeply affected by the bushfires raging across the state and wanted to offer help in some way. “It’s not unusual for families to have surplus stationary at the end of the school year that’s unused, and I felt if we could call on families to donate stationery then it might help communities affected by the bushfires, as it means parents don’t have to worry about going out and buying stationery for the start of the school year.” The Back to School and Beyond Bushfire Appeal combines Cockatoo Primary School, Emerald Lions, The Emerald Co-Op and The Emerald Village Newsagency. The initiative aims to help kids, particularly in Gippsland start the new school year with suitable school supplies. So far, the school has opened three times as a drop-off point, with Ms Boucher remarking that there has already been an outpouring of generosity. “We opened up the school on a Saturday and we were overwhelmed by people’s generosity ... people were not only coming from cockatoo, but from the wider areas of Pakenham and Gembrook and Emerald.” “To see young primary school aged children