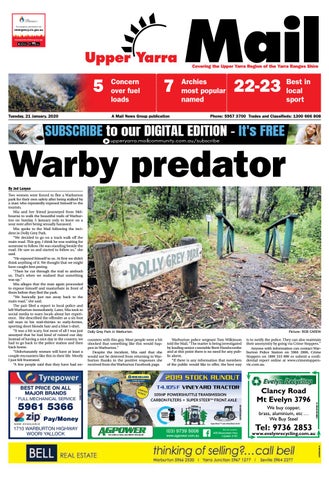 is to notify the police. They can also maintain their anonymity by going via Crime Stoppers.” Anyone with information can contact Warburton Police Station on 5966 2006, Crime Stoppers on 1800 333 000 or submit a confidential report online at www.crimestoppersvic.com.au.

Warburton police sergeant Tom Wilkinson told the Mail, “The matter is being investigated by leading senior constable Brett Handscombe and at this point there is no need for any public alarm. “If there is any information that members of the public would like to offer, the best way

counters with this guy. Most people were a bit shocked that something like this would happen in Warburton.” Despite the incident, Mia said that she would not be deterred from returning to Warburton thanks to the positive responses she received from the Warburton Facebook page.

BEST PRICE ON ALL MAJOR BRANDS

Two women were forced to flee a Warburton park for their own safety after being stalked by a man who repeatedly exposed himself to the tourists. Mia and her friend journeyed from Melbourne to walk the beautiful trails of Warburton on Sunday 5 January only to leave on a sour note after being sexually harassed. Mia spoke to the Mail following the incident in Dolly Grey Park. “We decided to go on a track walk off the main road. This guy, I think he was waiting for someone to follow. He was standing beside the road. He saw us and started to follow us,” she said. “He exposed himself to us. At first we didn’t think anything of it. We thought that we might have caught him peeing. “Then he cut through the trail to ambush us. That’s when we realised that something was up.” Mia alleges that the man again proceeded to expose himself and masturbate in front of them before they fled the park. “We basically just ran away back to the main road,” she said. The pair filed a report to local police and left Warburton immediately. Later, Mia took to social media to warn locals about her experience. She described the offender as a six foot tall man in his mid-thirties to early-forties, sporting short blonde hair and a blue t-shirt. “It was a bit scary, but most of all I was just annoyed that he had kind of ruined our day. Instead of having a nice day in the country, we had to go back to the police station and then back home. “Unfortunately women will have at least a couple encounters like this in their life. Mostly I just felt frustrated. “A few people said that they have had en-