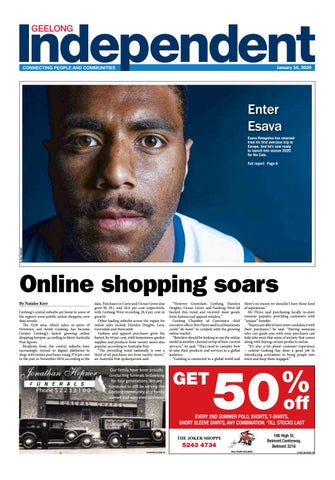 Enter Esava Esava Ratugolea has returned from his irst overseas trip to Europe. And he’s now ready to launch into season 2020 for the Cats.

Online shopping soars By Natalee Kerr Geelong’s central suburbs are home to some of the region’s most proliic online shoppers, new data reveals. he 3220 area, which takes in parts of Newtown and South Geelong, has become Greater Geelong’s fastest growing online shopping hotspot, according to latest Australia Post igures. Residents from the central suburbs have increasingly turned to digital platforms to shop, with online purchases rising 37.6 per cent in the year to November 2019, according to the

data. Purchases in Corio and Ocean Grove also grew by 29.1 and 28.8 per cent respectively, with Geelong West recording 28.4 per cent in growth. Other leading suburbs across the region for online sales include Hamlyn Heights, Lara, Grovedale and Newcomb. Fashion and apparel purchases grew the fastest, by 44 per cent, with homewares, garden supplies and products from variety stores also popular, according to Australia Post. “he prevailing trend nationally is over a third of all purchases are from variety stores,” an Australia Post spokesperson said.

“However Grovedale, Geelong, Hamlyn Heights, Ocean Grove and Geelong West all bucked this trend and received more goods from fashion and apparel retailers.” Geelong Chamber of Commerce chief executive oicer Ben Flynn said local businesses could “do more” to compete with the growing online market. “Retailers should be looking to use the online model as another channel on top of their current services,” he said. “hey need to consider how to take their products and services to a global audience. “Geelong is connected to a global world and

there’s no reason we shouldn’t have those kind of aspirations.” Mr Flynn said purchasing locally in-store remains popular, providing customers with “unique” beneits. “Buyers are able to have more conidence with their purchases,” he said. “Having someone who can guide you with your purchases can help take away that sense of anxiety that comes along with buying certain products online. “It’s also a lot about customer experience – central Geelong has done a good job in introducing activations to bring people into town and keep them engaged.”