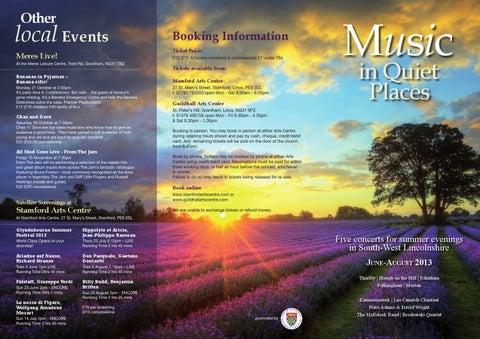 Chas and Dave Saturday 26 October at 7.30pm Chas ‘n’ Dave are top-class musicians who know how to give an audience a good time. They have gained a cult audience of both young and old and are back by popular demand! £23 (£22.50 concessions)

All Mod Cons Live - From The Jam Friday 15 November at 7.30pm From The Jam will be performing a selection of the classic hits and great album tracks from across The Jam’s fantastic catalogue. Featuring Bruce Foxton - most commonly recognised as the bass player in legendary The Jam and Stiff Little Fingers and Russell Hastings (vocals and guitar). £22 (£20 concessions)

St. Peter’s Hill, Grantham, Lincs, NG31 6PZ t: 01476 406158 open Mon - Fri 9.30am - 4.30pm &amp; Sat 9.30pm - 1.00pm Booking in person. You may book in person at either Arts Centre during opening hours shown and pay by cash, cheque, credit/debit card. Any remaining tickets will be sold on the door of the church from 6.45pm. Book by phone. Tickets may be booked by phone at either Arts Centre using credit/debit card. Reservations must be paid for within three working days, or half an hour before the concert, whichever is sooner. Failure to do so may result in tickets being released for re-sale.

We are unable to exchange tickets or refund money.

World Class Opera on your doorstep!

Music in Quiet Places! This year we stroll along musical and rural highways and byways, visiting some of the outstanding churches of the area to hear rare vocal music from the Renaissance, performed by the up and coming Les Canards Chantants and instrumental music of Italy in the 17th century in the company of the brilliant recorder player Piers Adams whose stunning virtuosity blows away any notions of the recorder as an instrument for simple music making! We welcome back The Mellstock Band with another journey through the traditional music and song of rural England. The series opens with the guitar and cello duo of James Woodrow and Audrey Riley who explore the sound world of both instruments, both solo and as a duo, in music by Bach and others. We are grateful to the incumbents, churchwardens and congregations of the churches, without whose support these events could not take place. Refreshments will be available during concert intervals. These are provided by the churches, and the income goes to church funds. Seating in all churches is unreserved. It can also be hard, so you may wish to bring a cushion or a rug with you! Car parking may be a short distance from the church. Please allow adequate time for parking, and be considerate to local residents. If you need any information about facilities, or access, please contact the Box Office at Stamford Arts Centre (01780 763203)

Piers Adams’ unique and virtuosic performance style breathes new life into music by the 17th century Italian masters. With harpsichordist David Wright, he takes the audience to the heart of the strange, wonderful and exciting music of Italy in the 1600s, culminating in the music of Corelli. Well-known for concerts and recordings with his group Red Priest, Piers Adams is joined by the group’s harpsichordist for an evening of high velocity music making.

Music by Bach, arranged by James for the duo, is at the heart of Kammermusik’s imaginative programme. They also play music by an earlier generation of French composers and exquisite miniatures by Jehan Alain and Joseph Hauer. Both musicians have distinguished careers as solo performers and with ensembles. James is also well-known as a jazz guitarist and Audrey for her work with dance companies, including Merce Cunningham. Dating back over a thousand years, St Firmin’s stands beside the Roman Carr Dyke. The Saxon base of the massive tower suggests that the original function of the building may have been defensive rather than religious. The church is cruciform in shape and the outstanding Norman work inside includes arches in the nave resting on sturdy pillars and an unusual font.

Many of the great sacred composers of the Renaissance led double musical lives, writing lesser-known secular songs as well as church music. Les Canards explore witty comic texts, sublime love songs and pieces in praise of wine by some of these composers. Les Canards Chantants, named after the unofficial mascot of the University of York where the singers met, was formed in 2010 to explore the dramatic possibilities of Venetian madrigals and ways of bringing them to life for today’s audiences. All Saints’ is one of the oldest churches in the area. Its Saxon tower, with a rare semicircular stair turret, and the lofty nave all bear witness to a magnificent church dating from before the Norman Conquest.

Wild Men of the Seicento

‘The reigning recorder virtuoso in the world today’ Washington Post From fragments of a Saxon cross to the Nave roof replaced in the 20th century, evidence of every century since its foundation is to be found in the architecture and furnishings of Edenham Church. The church also has one of the finest collections of monuments in the county, many to former owners of nearby Grimsthorpe Castle.

The popular Mellstock Band presents tales of dread and delight from hidden byways of the English rural tradition. Specialists in the village band music of Thomas Hardy’s time, the group’s inspired programmes include song, instrumental music and readings. They regularly appear in period TV programmes and films, and have performed in plays at the National Theatre and with the RSC. Tucked away behind trees at the top of Folkingham’s broad market place, the 15th-century tower of St Andrew’s, with its cluster of pinnacles, is visible from miles around. Amongst the church’s many impressive treasures is an oak screen, delicately carved with numerous small animals and flowers which divides the restored Norman chancel from the later nave.

Since their first Music in Quiet Places concert in 2009, the quartet has won several international awards and was recently appointed Artists in Association at Bristol University. As well as concerts in major London venues and UK festivals, the quartet has also worked extensively in Italy. Between music of old age and youth – Haydn’s last completed quartet and Mendelssohn’s first – comes Prokofiev’s quartet which not only uses traditional folk themes from the Caucasus but also imitates instruments of the area. ‘The brilliant Brodowski are a group to watch out for.’ The Independent St John’s has been described as the finest of the many remarkable churches on the edge of the Lincolnshire fens. A sympathetic restoration in 1861 has not compromised the impressive perpendicular aisles, flowing tracery in the chancel windows and a splendid font.