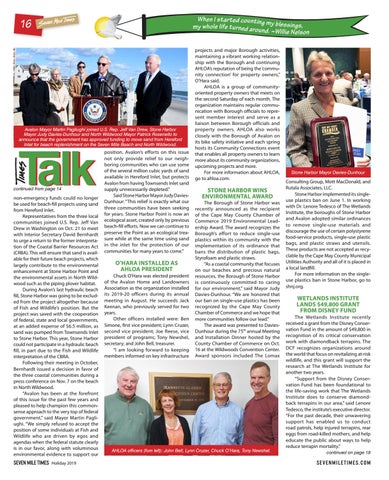 non-emergency funds could no longer be used for beach-fill projects using sand from Hereford Inlet. Representatives from the three local communities joined U.S. Rep. Jeff Van Drew in Washington on Oct. 21 to meet with Interior Secretary David Bernhardt to urge a return to the former interpretation of the Coastal Barrier Resources Act (CRBA). This will ensure that sand is available for their future beach projects, which largely contribute to the environmental enhancement at Stone Harbor Point and the environmental assets in North Wildwood such as the piping plover habitat. During Avalon’s last hydraulic beach fill, Stone Harbor was going to be excluded from the project altogether because of Fish and Wildlife’s position. But the project was saved with the cooperation of federal, state and local governments, at an added expense of $6.5 million, as sand was pumped from Townsends Inlet to Stone Harbor. This year, Stone Harbor could not participate in a hydraulic beach fill, in part due to the Fish and Wildlife interpretation of the CBRA. Following their meeting in October, Bernhardt issued a decision in favor of the three coastal communities during a press conference on Nov. 7 on the beach in North Wildwood. “Avalon has been at the forefront of this issue for the past few years and pleased to help champion this commonsense approach to the very top of federal government,” said Mayor Martin Pagliughi. “We simply refused to accept the position of some individuals at Fish and Wildlife who are driven by egos and agendas when the federal statute clearly is in our favor, along with voluminous environmental evidence to support our

position. Avalon’s efforts on this issue not only provide relief to our neighboring communities who can use some of the several million cubic yards of sand available in Hereford Inlet, but protects Avalon from having Townsends Inlet sand supply unnecessarily depleted.” Said Stone Harbor Mayor Judy DaviesDunhour: “This relief is exactly what our three communities have been seeking for years. Stone Harbor Point is now an ecological asset, created only by previous beach-fill efforts. Now we can continue to preserve the Point as an ecological treasure while at the same time using sand in the inlet for the protection of our communities for many years to come.”

projects and major Borough activities, maintaining a vibrant working relationship with the Borough and continuing AHLOA’s reputation of being the ‘community connection’ for property owners,” O’Hara said. AHLOA is a group of communityoriented property owners that meets on the second Saturday of each month. The organization maintains regular communication with Borough officials to represent member interest and serve as a liaison between Borough officials and property owners. AHLOA also works closely with the Borough of Avalon on its bike safety initiative and each spring hosts its Community Connections event that enables all property owners to learn more about its community organizations, upcoming projects and more. For more information about AHLOA, go to ahloa.com.

The Borough of Stone Harbor was recently announced as the recipient of the Cape May County Chamber of Commerce 2019 Environmental Leadership Award. The award recognizes the Borough’s effort to reduce single-use plastics within its community with the implementation of its ordinance that bans the distribution of plastic bags, Styrofoam and plastic straws. “As a coastal community that focuses on our beaches and precious natural resources, the Borough of Stone Harbor is continuously committed to caring for our environment,” said Mayor Judy Davies-Dunhour. “We are honored that our ban on single-use plastics has been recognized by the Cape May County Chamber of Commerce and we hope that more communities follow our lead.” The award was presented to DaviesDunhour during the 75th annual Meeting and Installation Dinner hosted by the County Chamber of Commerce on Oct. 16 at the Wildwoods Convention Center. Award sponsors included The Lomax

Consulting Group, Mott MacDonald, and Rutala Associates, LLC. Stone Harbor implemented its singleuse plastics ban on June 1. In working with Dr. Lenore Tedesco of The Wetlands Institute, the boroughs of Stone Harbor and Avalon adopted similar ordinances to remove single-use materials and discourage the use of certain polystyrene food-service products, single-use plastic bags, and plastic straws and utensils. These products are not accepted as recyclable by the Cape May County Municipal Utilities Authority and all of it is placed in a local landfill. For more information on the singleuse plastics ban in Stone Harbor, go to shnj.org.

The Wetlands Institute recently received a grant from the Disney Conservation Fund in the amount of $49,800 in recognition of its critical conservation work with diamondback terrapins. The DCF recognizes organizations around the world that focus on revitalizing at-risk wildlife, and this grant will support the research at The Wetlands Institute for another two years. “Support from the Disney Conservation Fund has been foundational to the life-saving work that The Wetlands Institute does to conserve diamondback terrapins in our area,” said Lenore Tedesco, the institute’s executive director. “For the past decade, their unwavering support has enabled us to conduct road patrols, help injured terrapins, rear eggs from road-killed mothers, and help educate the public about ways to help reduce terrapin mortality.” continued on page 18

Christmas waves a magic wand over th is world, and behold, everything is softer and more beautiful. ~Norm an Vincent Peale

Brian Williamson and Christine Mattera of The Wetlands Institute

Please join us as we support the Avalon Community www.ahloa.com Seven Mile Times

The Wetlands Institute focuses on several programs for conservation, including the Diamondback Terrapin Project. The comprehensive research and conservation are funded in part by the DCF in addition to the Quest for the Best Foundation, the Davenport Family Foundation, the Leff Family Foundation, and private donors through the symbolic terrapin adoption program. “We are grateful to all of these donors whose support has enabled 30 years of crucial research and conservation into these residents of our marshes,” said Tedesco. Since 1995 DCF, has allotted nearly $86 million to save wildlife in more than half the countries around the world. The Wetlands Institute has been fortunate to receive grant money to assist in its continued education to the public through events such as Turtle Fest and other initiatives such as the Adopt-a-Terrapin program in which the public can sponsor a level of adoption and provide funding toward conservation. Go to wetlandsinstitute.org to learn more.

The Veterans Day ceremony held by American Legion Post 331 and the Borough of Avalon at Veterans Plaza was extra special this year. Nov. 11 also happened to be the 100th birthday of World War II veteran Frank D’Elia, of Stone Harbor. In addition to the annual presentation of wreaths and a rifle salute for Veterans Day, Avalon Mayor Martin Pagliughi and Post 331 Commander Tom

McCullough recognized D’Elia’s milestone birthday and his service to our country with a plaque. “Frank D’Elia is a true hero of not only the Seven Mile Beach, but among his peers who also served our country,” Pagliughi said. “We were truly honored to recognize Frank for his efforts during World War II, and I join his countless friends in wishing him many years of enjoying his hometowns of Stone Harbor and Avalon.” D’Elia enlisted in the Army following the Pearl Harbor attacks and was among the estimated 156,000 troops who served. He served from 1942 until he was discharged in 1945. He has been awarded several medals including recognition for good conduct, meritorious service and distinguished service. He was also honored by Pope Benedict in 2015. Although he grew up in Philadelphia, D’Elia spent summers in Stone Harbor at his family’s home on 81st Street until it was destroyed in the Storm of 1962. In 1977, he and his wife purchased their Charles Street home in Stone Harbor in which he currently resides with his daughter Pauline and son-in-law EJ Tate. D’Elia is a member of the American Legion Post 331, the Knights of Columbus, and St. Paul Church. 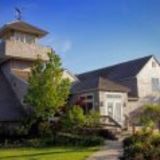