The Scottish Rite Grand Almoner's Fund: The Angel of the Waters 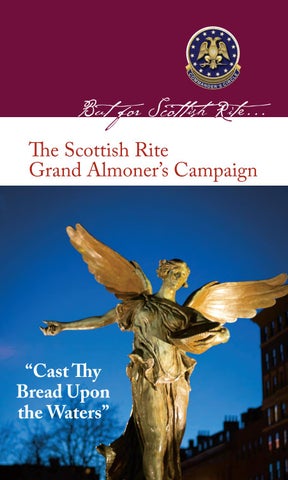 “Cast Thy Bread Upon the Waters”

The Angel of the Waters The Angel of the Waters is a beautiful, allegorical monument tucked in the far northwest corner of Boston’s Public Garden. The size and sweep of the statue first draw you in. This is a confident angel. Determined, she strides forward with sureness and energy, holding a basket of bread in the crook of her left arm and sowing her bounty widely with her right. Her majestic wings spread out on either side, and her robes blow back with the speed of her passage. The inscription on the monument’s base is profoundly moving.

“Cast thy bread upon the waters for thou shalt find it after many days.” (Ecclesiastes 11:1) This Bible verse gives the viewer an immediate connection to the power of giving. The verse’s allegory inspires the confidence to live with an open heart as part of our mission here on Earth. It encourages us to trust that help circles back when we are in need. This sentiment surely resonates with us as Freemasons now, as it has through the ages.

It will come as no surprise that the man who commissioned the monument, George Robert White (1847–1922), was, in fact, a Brother Mason. A well-known Boston philanthropist, White gave generously throughout his life to Boston’s museums, hospitals, schools, and other institutions. He left more than $5 million to the city for public art in order to “nourish the spirits of its citizens.” White commissioned the sculptor Daniel Chester French, the artist who created the magnificent statue in the Lincoln Memorial, to design a monument dedicated to the power of giving. The verse from Ecclesiastes was chosen with purpose by Brother White. He and French deliberately added two large bronze cornucopias, the emblem of the Steward of the lodge. Through the “horns of plenty,” water is channeled and fills the granite pool on either side of the statue. Visitors sometimes place fruit in the angel’s basket and around her feet. Brother White’s grand testament to giving was surely informed by his life as a Freemason. With her walk, her energy, and her joy, his Angel of the Waters inspires us to spread our generosity. She articulates the joy we feel, and the hope we impart to others, as we, too, “cast our bread upon the waters.”

The work we do through the Grand Almoner’s Fund to “nourish the spirits” of our Brothers, their families, and widows in need surely would have resonated with Brother White. From more than 100 years ago, the words he wrote inspire us to: Give of what you have. Share the bounty. Take joy in your generosity. Be eager to help others. Be confident in your conviction. Let no one get in your way. Go forth and help.

It will come as no surprise that the man who commissioned the monument, George Robert White was, in fact, a Brother Mason.

Join the Commander’s Circle. Return the enclosed envelope, or donate easily and securely online at bit.ly/GrandAlmonersFund and select “Scottish Rite Grand Almoners” from the drop-down menu.

You Get in Return What You Give Brother RC had the great misfortune of suffering through the near- destruction of his home because of a lightning strike. Fire damage was great. The house was uninhabitable, and needed extensive repairs. Many of the family’s personal belongings were destroyed, as well. Brother RC and his family were facing displacement for an extended period. When your Scottish Brothers learned of RC’s situation, it was clear that the extra expenses his family was forced to incur because of the fire were becoming a serious burden. Ill. Brother Edsel Emery, 33°, took the lead. Together with Deputy for Ohio Douglas Kaylor, 33°, Grand Almoner Peter Samiec, 33°, and Grand Commander McNaughton, they worked out a plan to help this family in crisis.

If you ever doubted how much your donation helps Brothers in need, read RC’s words of thanks: “I just want to take a moment to express my thanks for the gift I received from the Grand Almoner’s Fund. This will sustain my daily living while I am displaced from my house while it is being repaired. “I am so blessed to be a Scottish Rite Mason. I cannot imagine what I would do if not for the support of my Masonic Brothers. Words escaped me as tears of joy and relief overcame me when Ill. Brother Edsel Emery presented me with the check. He made only a simple statement that means so much to me. He said, Brother, we want to help.” The story does not end there. There is a saying, “You get in return what you give.” Ill. Brother Emery experienced this first hand: “It was my honor to represent the Supreme Council and the Grand Almoner’s Fund at the moment when we changed the life of a Brother. When I presented him with the check, we were all extremely emotional. I have never felt such pride to be part of the Scottish Rite as I did at that moment. Of all we do in our beloved fraternity, above all else is the work that touches our Brothers in need.”

“I have never felt such pride to be part of the Scottish Rite as I did at that moment.” —Edsel Emery, 33°

“We Mean It. I Have Seen It” Ill. Brother Robert Lee Cummins, 33°, tells us in his own words how he experienced the power of the circle of giving. He helped a widow he knew well for many years navigate very difficult circumstances. His words say it all: “I feel the need to put pen to paper and thank you for allowing me to be part of changing a widow’s life forever. I was very close to her husband, and it is hard to find the words to express how I feel about the commitment made to our Brothers and widows in their hour of need. “I have personally been involved with delivering checks to worthy Brothers and witnessing the change it makes in their lives. But, this is the first time I have been involved with someone I know so well, and whose husband meant so much to me. I know that words of thanks are not even close to being gratitude enough for allowing me to be part of the Grand Almoner’s effort. But when our Scottish Rite says, ‘We will strive to be a fraternity that fulfills our Masonic obligation to care for our members,’ we mean it. I have seen it. Thank you so very much.”

Keeping a Brother Warm in Winter When the Grand Almoner’s Fund steps up in time of great crisis, it is dramatic and impactful. The support we offered to our Brothers in Louisiana after the great flood of 2016 is memorable. But, the relief we provide is not available only in grand, historic moments. In fact, far more often, our impact is greatest when we help in quieter, more personal ways. Ill. Brother Thomas R. Labagh, 33°, of the Valley of Harrisburg, tells us what it meant to him to help keep a Brother and his family warm in the winter. “Here is a contribution to the Grand Almoner’s Fund with my thanks for your approval to help a fellow Brother replace his furnace during the bitter cold of January. I was privileged to be present when he received the check, and his gratitude was overwhelming. “I am so proud to be a Scottish Rite Mason. I appreciate the visionary leadership that brings us back to taking care of our own members. God bless the Scottish Rite for that!”

The Grand Almoner’s Fund is a fund of the Scottish Rite Benevolent Foundation, a qualified charity under 501(c)(3) of the Federal Tax Code. All donations are fully tax deductible to the extent allowed under law.

n the occasion of the 200th anniversary of Scottish Rite Freemasonry, Sovereign Grand Commander John Wm. McNaughton, 33°, commissioned a special honor to recognize the most generous donors to the Grand Almoner’s Fund. The Commander’s Circle is made up of two levels of giving:

Members of these donor societies are commemorated on a plaque in the newly constructed Supreme Council Headquarters located in Lexington, Massachusetts.

W ay s t o G i v e Direct donations and pledges that can be paid over a period of up to five years are excellent ways to support the Grand Almoner’s Campaign. Bequests are also encouraged and deeply appreciated. Gifts of securities may be donated, as well. Gifts of real property may be possible, but are subject to review before acceptance.

The Scottish Rite Grand Almoner's Fund: The Angel of the Waters

The work we do through the Grand Almoner’s Fund to “nourish the spirits” of our Brothers, their families, and widows in crisis is the manifestation of our Masonic obligation to care for each other. 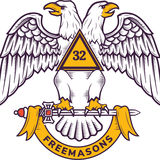