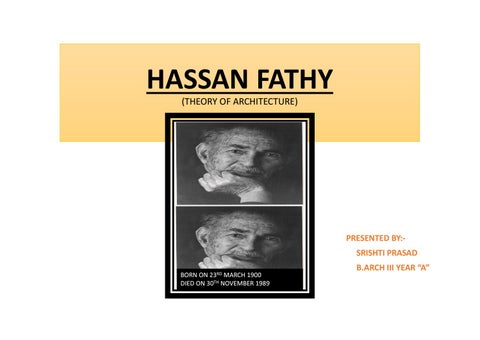 INTRODUCTION • Within the rapid development of technology towards the end of 19th century , construction technology too underwent a rapid change. • Mass production of steel • Age of reinforced concrete with idea of strengthening beams and columns. • Foundation of modern architecture laid by architects and engineers from the country like FRANCE, ENGLAND, AMERICA and GERMANY.

Became a milestone in the field of architecture

if architecture respects nature, only then will it be able to blend with it.

Five points of modern architecture. > using columns instead of plinth and foundation. > terrace garden > using columns in the interior for doing a free flowing spatial organization > using a strip window in the wall > Curtain wall

EGYPT • Modernism in Architecture was taking place over the world by storm at a tremendous pace. • 1869 – completion of Suez canal, Egypt became centre of international transportation. • English were ruling over Egypt, base for defence purpose set up in Egypt(1869-1956). • During world war (1939-1945), it become difficult to produce cement, steel and timber. Construction became to stand still in Egypt.

HASSAN FATHY â&#x20AC;˘ In 1926, Hassan Fathy graduated from Cairo university. â&#x20AC;˘ During the beginning of modern architecture, le Corbusier proclaims that the use of materials such as plate glass, steel and reinforced concrete as well as the image of industrial age, were the basis of all revolutionary change that he proposed. â&#x20AC;˘ For him and many others in this movement, the space that could created by using such technological advancement had social corrective potential, and honestly of expression in the use of technology was considered to be an essential prerequisite to a brighter future.

â&#x20AC;˘ Rather then believing in this, Fathy felt that human being, nature and architecture should coexist in harmonious balance. â&#x20AC;˘ For him, architecture was a communal art, that should reflect the personal habits and traditions of a community rather than reforming them. â&#x20AC;˘ He felt that technology should be subservient to social values, and appropriate to popular needs.

• He was finding it difficult to just depend on the modern construction. • He was working for urban amenities department. • He was fascinated with traditional houses. • He scientifically studied Egypt’s tradition of making simple and convenient house using local material. • Fathy belief that Egypt cannot built on technology alone, and that all future progress must be tempered with faith and social values. • Fathy used brick and mud, in sandy and hot Egypt, to prevent the influx of heat.

ARCHITECTURAL PERSPECTIVE • He believed that these vernacular houses are not merely functional but can measure up to any building in terms of form, texture and beauty. • He used Ancient design method and material, Utilizing a knowledge of rural Egyptian economic situation • He designed space suitable to surrounding environment

ARCHITECTURAL PERSPECTIVE • Low cost construction without using modern materials (R.C.C and steel). • Training locals to build ones own house.  Fathy trained unskilled craftsmen in rural areas of Egypt.  Then he used them to create exquisite architecture.  Rejecting large commissions he devoted his entire life to make houses for the homeless.  ‘Houses of the poor are ugly’, Fathy was able to realize that this deep rooted notion should be eradicated.

• Due to Fathy's effort in 20th century . Traditional housing of Egypt was recognized as ‘COST-EFFECTIVE’ and ‘APPROPRIATE’. “Man is at the centre of nature. In similar way he is also a part of nature and is tied down with the rules of nature”

ARCHITECTURE OF THE POOR • 1969 – his book ARCHITECTURE OF THE POOR was published. • His book architecture of the poor, a call for integration of nature and industry, prefigures the current ethos of sustainability: we must find a solution to the hitherto insoluble problem of the clash between the product of industry and the demands of nature and of society. It would be useful to subject technology to the economy and materials of a particular region. In this way the quality and values inheretent in the traditional and human response to the environment might be preserved without the loss of the advances of science. Science can be applied to various aspects, while it is at the same time subordinated to philosophy, faith and spirituality.

 Air circulation  A pressure gradient used to get away with the hot air.

ARCHITECTURAL FEATURES(AKIL SAMI HOUSE) • The cabin is located on the chest of a hill, with breezes from the southwest. • It has been aligned in an east west orientation • Northern façade is protected with deciduous trees from direct heat gain during the summer and allow radiant heat to be captured by the thermal mass properties of limestone blocks, in winters. • Natural ventilation is key in the cabin and windows and openings are positioned to allow the south-west wind to flow through the interior space. • Interior courtyard is also present to provide cooling and a shaded outdoor space.

• Thermal resistivity of domes – FATHY made use of many curved surfaces such as arches, vaults and domes to increase the speed of air flow, due to low pressure. Curve surface also limit the amount of heat absorption. • Thick walls – heat does not reaches inside of the wall, when the temperature drops at night, the cool breezes can then draw the heat out into night sky.

HAMID SAID STUDIO â&#x20AC;˘ Hamid said studio is an important project as is its first application of mud brick construction which is still standing. â&#x20AC;˘ The first phase which was built in 1942 was just a studio and a sleeping space for artist and his wife which was incorporated with a large loggia as an open exterior sitting area Made to appreciate the seemingly endless green palm groves surrounding the property.

â&#x20AC;˘ The second phase , which followed four years later Was equally important in accommodating the environment which was avoiding most of trees present at the site. 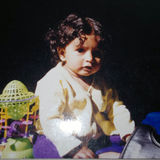 During the beginning of modern architecture, le Corbusier proclaims that the use of materials such as plate glass, steel, and reinforced con...

During the beginning of modern architecture, le Corbusier proclaims that the use of materials such as plate glass, steel, and reinforced con...