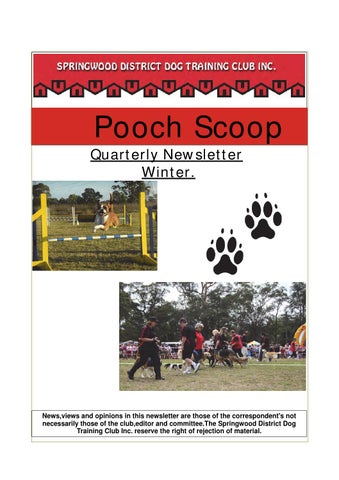 News,views and opinions in this newsletter are those of the correspondent&#39;s not necessarily those of the club,editor and committee.The Springwood District Dog Training Club Inc. reserve the right of rejection of material.

Remember you are always welcome to attend our Club&#39;s General Meetings at the Red Cross Hall in Macquarie Road, Springwood on the 3rd Tuesday of each month at 7.30 p.m. (There is no meeting in December). Life Members – Dot Luker, Ann Moy, Sue Fell, Ron Amann, Wally Campbell, Pam Waters, Lesley Piggott, Lynn Olson. Annual General Meeting will be held on the last Thursday in August, 2013. (There will be no training on that night). Web Site – -www.sddtc.org Email - - -info@sddtc.org Training days – Agility

Wet Weather – Call bounce back on 19922767 text dog training and you will get a message back whether the oval is open or not.

Guess the breed of dog below and win a nice surprise for your best friend. Place your entry in the box on the sign on table. MAC&#39;S MYSTERY MUTT Bred by crossing a Bulldog with a terrier, this dog was produced to fight to the death in the bloody sport of bull baiting. They are now one of the most popular dogs in Britain, and have proved to be an impeccable guard dog. The Miniature has existed for as long as the standard, and was recognised as a separate breed by he British Kennel Club in 1939. The breed is a strongly built, deep chested muscular dog. The shape of the head differs from that of other terriers. They have a long, strong egg shaped head with a Roman nose. Their eyes are triangular in shape and deep set. The most usual colour for this breed is white with about 70% of which have a coloured marking on the head or sometimes on the back. They can also be black, brindle, red, fawn or tricolour. The dog stand at 45 cms to the withers and a weight of 33 kg. There will be variations on these measurements but they give a rough idea of the size of this breed. They are a friendly dog with a wonderful sense of humour. Their physical strength is matched by their supreme intelligence, and both body and mind need to be kept active. They can be obstinate and are not ideal dogs for the first-time owner. As a breed they are generally placid but is has to be remembered that they were originally bred as fighting dogs therefore they will react if challenged but they will not normally make the first move. They are very affectionate dogs and love company so it is not a good idea to leave them alone for long periods of time as with their strong jaws they can cause lots of damage if bored. These dogs are intelligent and do learn reasonably quickly. However as a breed they can be stubborn and have a will of their own so a firm hand is needed

Using the Game of Tug as a Training Tool A lot of people don&#39;t recommend tug as a game, but I believe it has great potential as a learning tool because it&#39;s a game that dogs really love. The trick is that you first have to prove to the dog that you are in control. For the adult dog who nips or mouths constantly, they are probably looking to start a game – they may be particularly playful and active and need to expend some energy. So a controlled game of tug is a great energy release. First teach the dog “give” by getting the dog to tug on a rope or tug toy then show the dog a treat. At the split second the dog lets go of the rope, say “give” then reward with the treat. Do his enough times for the dog to start anticipating the treat when the word ”give” is said. Don&#39;t let the games of tug get rough at this stage – we don&#39;t really want to “play” tug yet, we just want the dog to hold the rope in it&#39;s mouth. The level of mouthing that&#39;s allowed is zero, the dog must never touch you with his teeth. That should be an immediate end of game. Even if you offer him your hand, he should go out of his way to avoid it. Dogs are extremely quick with their mouths, much quicker than we are with our hands. Don&#39;t ever assume that he touched you with his teeth “by accident”. Make no exceptions to this rule. Now play the game of tug and implement a “time out” every time the dog breaks the “rules”. Meaning, if the dog&#39;s teeth brush your hand drop the toy and leave the room, leaving the dog behind. This must be instant and consistent, and the best thing is to remove yourself from the dog - this is faster than putting the dog in a crate, it also gives a stronger message. Also, if you say, “give” and the dog doesn&#39;t give, then simply drop the toy and leave the room. By making the dog give and retake a number of times during the game, you control the game and the dog believes you are in charge. I&#39;d suggest the “time out” period be at least a few minutes, and the dog should not see or hear from you for that time. If you don&#39;t trust the dog in the room alone for that period of time, then play the game in a room that you can safely leave the dog in by itself – e.g. bathroom, laundry, or outside in his dog run, if he has one. Be sure the dog is left in a boring place when you go, so that it will be disappointed by your departure. I got this information from a seminar I attended. This approach (the “time out”) is called NEGATIVE PUNISHMENT – it means removing something that the dog wants, namely the game. Don&#39;t worry about the fact that you&#39;ve left the dog with the toy – a rope is just a boring old rope without someone pulling on the end.

CLUB RAFFLE FOR OBEDIENCE TRIAL - JULY The Club will be running a raffle at our Obedience Trial in July. There will be a raffle box at the sign on table every week so if you could assist the club with any items it would be greatly appreciated.

VOLUNTEERS FOR OBEDIENCE TRIAL - JULY We require volunteers to assist with stewarding, morning teas, lunches, etc., so any amount of time would be helpful. Morning tea and lunch is provided for all volunteers. If you would like to come along, there will be a volunteer sheet at the sign on table. Just fill in your name and contact number.

DOG QUOTE OF THE MONTH A dog should always bear in mind that he is dealing with a dumb creature who does not possess his own ability to reason; and it is not the man&#39;s fault if he fails to grasp what the dog desires. Six

A LA DOG DISH Tempting Training Treats 2 1/3 cups flour – all purpose or whole wheat ¼ cup olive oil ¼ cup applesauce ½ cup grated cheese 1 large egg l teaspoon garlic powder ¼ cup powdered milk – non fat Directions – Combine all ingredients in a large bowl; mix well; roll the dough out to size of a cookie sheet; pat the dough onto a lightly greased cookie sheet, bringing it to the edges. Using a sharp knife or a pizza cutter, cut desired sizes into dough (just score through). If using as training treats, cut them into small pieces. Sprinkle a little extra cheese and garlic powder if desired on dough for flavour. Bake in a 180 degree oven about 15 minutes until golden brown. Turn off the oven and let cool for a few hours. They will keep hardening the longer you leave them. Break them apart, store tightly covered or in the freezer.

If you have any interesting facts, information you would like to see in the newsletter please feel free to send them to the club email - info@sddtc.org