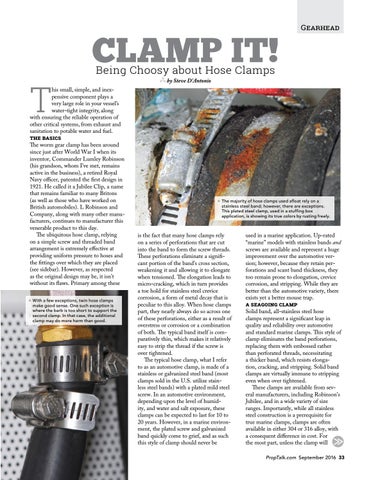 Being Choosy about Hose Clamps

his small, simple, and inexpensive component plays a very large role in your vessel’s water-tight integrity, along with ensuring the reliable operation of other critical systems, from exhaust and sanitation to potable water and fuel. The Basics The worm gear clamp has been around since just after World War I when its inventor, Commander Lumley Robinson (his grandson, whom I’ve met, remains active in the business), a retired Royal Navy officer, patented the first design in 1921. He called it a Jubilee Clip, a name that remains familiar to many Britons (as well as those who have worked on British automobiles). L Robinson and Company, along with many other manufacturers, continues to manufacturer this venerable product to this day. The ubiquitous hose clamp, relying on a simple screw and threaded band arrangement is extremely effective at providing uniform pressure to hoses and the fittings over which they are placed (see sidebar). However, as respected as the original design may be, it isn’t without its flaws. Primary among these ##With a few exceptions, twin hose clamps make good sense. One such exception is where the barb is too short to support the second clamp. In that case, the additional clamp may do more harm than good.

##The majority of hose clamps used afloat rely on a stainless steel band; however, there are exceptions. This plated steel clamp, used in a stuffing box application, is showing its true colors by rusting freely.

is the fact that many hose clamps rely on a series of perforations that are cut into the band to form the screw threads. These perforations eliminate a significant portion of the band’s cross section, weakening it and allowing it to elongate when tensioned. The elongation leads to micro-cracking, which in turn provides a toe hold for stainless steel crevice corrosion, a form of metal decay that is peculiar to this alloy. When hose clamps part, they nearly always do so across one of these perforations, either as a result of overstress or corrosion or a combination of both. The typical band itself is comparatively thin, which makes it relatively easy to strip the thread if the screw is over tightened. The typical hose clamp, what I refer to as an automotive clamp, is made of a stainless or galvanized steel band (most clamps sold in the U.S. utilize stainless steel bands) with a plated mild steel screw. In an automotive environment, depending upon the level of humidity, and water and salt exposure, these clamps can be expected to last for 10 to 20 years. However, in a marine environment, the plated screw and galvanized band quickly come to grief, and as such this style of clamp should never be

used in a marine application. Up-rated “marine” models with stainless bands and screws are available and represent a huge improvement over the automotive version; however, because they retain perforations and scant band thickness, they too remain prone to elongation, crevice corrosion, and stripping. While they are better than the automotive variety, there exists yet a better mouse trap. A Seagoing Clamp Solid band, all-stainless steel hose clamps represent a significant leap in quality and reliability over automotive and standard marine clamps. This style of clamp eliminates the band perforations, replacing them with embossed rather than perforated threads, necessitating a thicker band, which resists elongation, cracking, and stripping. Solid band clamps are virtually immune to stripping even when over tightened. These clamps are available from several manufacturers, including Robinson’s Jubilee, and in a wide variety of size ranges. Importantly, while all stainless steel construction is a prerequisite for true marine clamps, clamps are often available in either 304 or 316 alloy, with a consequent difference in cost. For the most part, unless the clamp will PropTalk.com September 2016 33