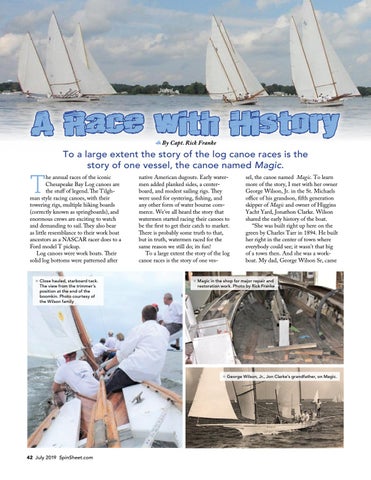 A Race with History By Capt. Rick Franke

he annual races of the iconic Chesapeake Bay Log canoes are the stuff of legend. The Tilghman style racing canoes, with their towering rigs, multiple hiking boards (correctly known as springboards), and enormous crews are exciting to watch and demanding to sail. They also bear as little resemblance to their work boat ancestors as a NASCAR racer does to a Ford model T pickup. Log canoes were work boats. Their solid log bottoms were patterned after ##Close hauled, starboard tack. The view from the trimmer’s position at the end of the boomkin. Photo courtesy of the Wilson family

native American dugouts. Early watermen added planked sides, a centerboard, and modest sailing rigs. They were used for oystering, fishing, and any other form of water bourne commerce. We’ve all heard the story that watermen started racing their canoes to be the first to get their catch to market. There is probably some truth to that, but in truth, watermen raced for the same reason we still do; its fun! To a large extent the story of the log canoe races is the story of one ves-

sel, the canoe named Magic. To learn more of the story, I met with her owner George Wilson, Jr. in the St. Michaels office of his grandson, fifth generation skipper of Magic and owner of Higgins Yacht Yard, Jonathon Clarke. Wilson shared the early history of the boat. “She was built right up here on the green by Charles Tarr in 1894. He built her right in the center of town where everybody could see; it wasn’t that big of a town then. And she was a workboat. My dad, George Wilson Sr, came

##Magic in the shop for major repair and restoration work. Photo by Rick Franke 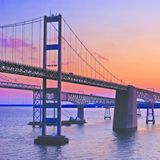