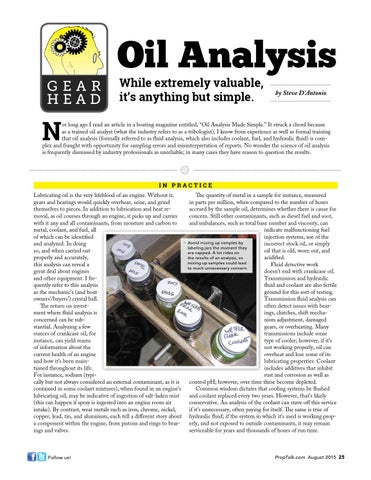 While extremely valuable, it’s anything but simple.

ot long ago I read an article in a boating magazine entitled, “Oil Analysis Made Simple.” It struck a chord because as a trained oil analyst (what the industry refers to as a tribologist), I know from experience as well as formal training that oil analysis (formally referred to as fluid analysis, which also includes coolant, fuel, and hydraulic fluid) is complex and fraught with opportunity for sampling errors and misinterpretation of reports. No wonder the science of oil analysis is frequently dismissed by industry professionals as unreliable; in many cases they have reason to question the results.

In practice Lubricating oil is the very lifeblood of an engine. Without it, gears and bearings would quickly overheat, seize, and grind themselves to pieces. In addition to lubrication and heat removal, as oil courses through an engine, it picks up and carries with it any and all contaminants, from moisture and carbon to metal, coolant, and fuel, all of which can be identified and analyzed. In doing so, and when carried out properly and accurately, this analysis can reveal a great deal about engines and other equipment. I frequently refer to this analysis as the mechanic’s (and boat owners’/buyers’) crystal ball. The return on investment where fluid analysis is concerned can be substantial. Analyzing a few ounces of crankcase oil, for instance, can yield reams of information about the current health of an engine and how it’s been maintained throughout its life. For instance, sodium (typically but not always considered an external contaminant, as it is contained in some coolant mixtures), when found in an engine’s lubricating oil, may be indicative of ingestion of salt-laden mist (this can happen if spray is ingested into an engine room air intake). By contrast, wear metals such as iron, chrome, nickel, copper, lead, tin, and aluminum, each tell a different story about a component within the engine, from pistons and rings to bearings and valves.

The quantity of metal in a sample for instance, measured in parts per million, when compared to the number of hours accrued by the sample oil, determines whether there is cause for concern. Still other contaminants, such as diesel fuel and soot, and imbalances, such as total base number and viscosity, can indicate malfunctioning fuel injection systems, use of the ##Avoid mixing up samples by incorrect stock oil, or simply labeling jars the moment they oil that is old, worn out, and are capped. A lot rides on acidified. the results of an analysis, so mixing up samples could lead Fluid detective work to much unnecessary concern. doesn’t end with crankcase oil. Transmission and hydraulic fluid and coolant are also fertile ground for this sort of testing. Transmission fluid analysis can often detect issues with bearings, clutches, shift mechanism adjustment, damaged gears, or overheating. Many transmissions include some type of cooler; however, if it’s not working properly, oil can overheat and lose some of its lubricating properties. Coolant includes additives that inhibit rust and corrosion as well as control pH; however, over time these become depleted. Common wisdom dictates that cooling systems be flushed and coolant replaced every two years. However, that’s likely conservative. An analysis of the coolant can stave off this service if it’s unnecessary, often paying for itself. The same is true of hydraulic fluid; if the system in which it’s used is working properly, and not exposed to outside contaminants, it may remain serviceable for years and thousands of hours of run time.