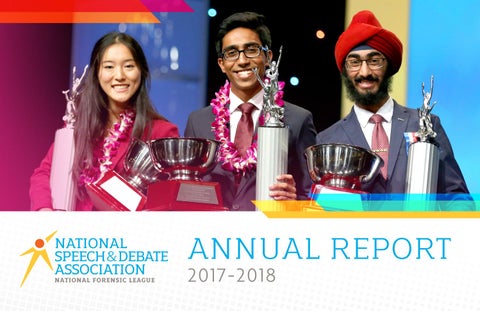 FROM THE EXECUTIVE DIRECTOR Because of you, speech and debate prepares young people with the essential life skills of critical thinking, communication, collaboration, and creativity. Whether these young people are promoting democracy and civic engagement across the globe at the World Schools Debating Championship or advocating for their community every day in Parkland, Florida, I&#39;m reminded of how bright the future is because of the speech and debate opportunities you make possible. As Neuteyshe Felizor reminds us on page 6, &quot;By lifting our voices, we have limitless opportunities to create real change in policies and in our daily lives.&quot; Thank you for the generosity of your time volunteering or advocating for speech and debate. Thank you for making speech and debate a priority. You are making a difference every day in the lives of Neuteyshe and each of the tens of thousands of students participating in speech and debate! With gratitude,

My wish is that we still have people committed enough to continue this activity, even though it’s a tough job and takes so much time. . . I hope that we will have the financial support we need from people and corporations who realize what a lifelong skill this is and the value it brings to communities and — Don Crabtree, former NSDA President companies.

Well-known for his Hawaiian shirts, his even temper in high-pressure situations, and his calming presence on stage at the National Tournament, Don is a mentor, friend, and teacher to everyone who approaches him. This June, as a result of his historic number of coach service citations, the NSDA renamed the honor to the &quot;Don Crabtree Distinguished Service Award.&quot; Don’s dedication to service, to speech and debate, and to the NSDA has always been all about the young people. “This activity saves so many kids who would fall through the cracks. They may never win tournaments, or even win a round, and that&#39;s of no importance. They find a safe space in speech and debate. They find a place to belong. They find a family.&quot;

President Don Crabtree retired from the National Speech &amp; Debate Association’s Board of Directors in July of 2018. Don has dedicated more than 46 years of his life to speech and debate as a coach, a district leader, a district chair, a member of the NSDA Board of Directors, and as vice president and finally president of the Board.

SCHOOLS EARNING AT LEAST ONE DEGREE

N AT I O N A L TOURNAMENT

We have created a culture that states, ‘Because silence is just easier, it&#39;s more effective’. But, we are wrong. As a nation, our silence is no longer a discretionary tool of communication. . . I challenge us all to get out of our comfort zones and address the reality of the injustices experienced by far too many in our communities. By lifting our voices, we have limitless opportunities to create real change in policies and in our daily lives.

The National Speech &amp; Debate Association partnered with the Broward County Public Schools Active Voice Project to kick off the 2018 National Speech &amp; Debate Tournament with a live event presented by Students Demand Action called Powerful Voices. Meaningful Changes. A diverse set of Broward County speech and debate students gave performances on the importance of voices. The event highlighted the importance of empowering students to exercise their voices to express their views and participate actively in an open exchange of ideas as taught through speech and debate.

It’s one thing to read about the Turkish education system or the Singaporean legal code, but it’s entirely another to discuss them with people your age for whom those things are everyday life.

Ella spent two years on the USA Debate Team but has been active in speech and debate since the start of high school. A former California state champion and NSDA national finalist (House), Ella helped USA Debate reached global success during her time, including a third place finish at the 2017 World Championship In Bali, Indonesia, and earning sixth place at the 2018 World Championship in Singapore. In addition to being captain of her school&#39;s debate team, she is a founding member of her school&#39;s Model United Nations team and interns with California State Senator Robert Hertzberg during the summer. She also interned for Rostrum, the magazine of the National Speech &amp; Debate Association. Ella’s hope for USA Debate? “A World Championship, of course! But beyond that, I primarily hope that the privilege of membership is available to as many people as possible.”

Speech and debate taught me how to examine all sides of a problem. This makes me a better leader.

Norisha Kirts, one of the NSDA alums featured in the 2018 Black History Month Poster series, is the president of NRK Construction, a commercial and residential firm operating in Southeast Louisiana. To view her poster and the complete series, visit our website at: www.speechanddebate.org/ black-history-month/

IN A WORLD THAT TEACHES BLACK WOMEN THAT WE ARE LESS THAN, SPEECH AND DEBATE TAUGHT ME THAT I CAN BE EVERYTHING AND SO MUCH MORE .

BEING ABLE TO ORGANIZE AND ARTICULATE MY VIEWS PREPARED ME WELL FOR LAW SCHOOL AND BEYOND. MY CAREER AS A LAWYER , STATE REPRESENTATIVE , AND NOW MAYOR SIGNIFICANTLY BENEFITED FROM MY PARTICIPATION IN SPEECH AND DEBATE .

THERE IS NO SUBSTITUTE FOR EXCELLENCE.

Inspired by recommendations from the African American/ Black Coaches’ Caucus and in partnership with Wiley College, the NSDA created a series of classroom and tournament resources to celebrate Black History Month in 2018.

FINALIST ($5,000 AND UP) Anonymous David and Katherine Abel In Memory of LaVoy and Jo Ann Abel

David C. Frederick and Sophia Lynn In Memory of B. J. and Lanny Naegelin

Kirby Chin In Memory of Richard B. Sodikow

In Memory of Harry and LeVoyne Littlefield

St. Andrew&#39;s Episcopal School In Honor of Tanner McGee and In Memory of Perry Tyner Tate

In Memory of Carl Grecco

In Honor of Kathy Owens

Steve and Ari Gloss/Sharelle In Honor of Robin Gloss