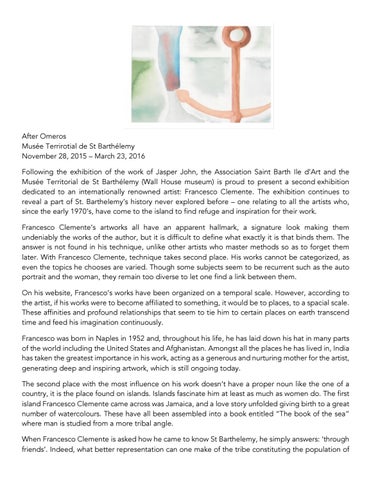 After Omeros Musée Terrirotial de St Barthélemy November 28, 2015 – March 23, 2016 Following the exhibition of the work of Jasper John, the Association Saint Barth Ile d’Art and the Musée Territorial de St Barthélemy (Wall House museum) is proud to present a second exhibition dedicated to an internationally renowned artist: Francesco Clemente. The exhibition continues to reveal a part of St. Barthelemy’s history never explored before – one relating to all the artists who, since the early 1970’s, have come to the island to find refuge and inspiration for their work. Francesco Clemente’s artworks all have an apparent hallmark, a signature look making them undeniably the works of the author, but it is difficult to define what exactly it is that binds them. The answer is not found in his technique, unlike other artists who master methods so as to forget them later. With Francesco Clemente, technique takes second place. His works cannot be categorized, as even the topics he chooses are varied. Though some subjects seem to be recurrent such as the auto portrait and the woman, they remain too diverse to let one find a link between them. On his website, Francesco’s works have been organized on a temporal scale. However, according to the artist, if his works were to become affiliated to something, it would be to places, to a spacial scale. These affinities and profound relationships that seem to tie him to certain places on earth transcend time and feed his imagination continuously. Francesco was born in Naples in 1952 and, throughout his life, he has laid down his hat in many parts of the world including the United States and Afghanistan. Amongst all the places he has lived in, India has taken the greatest importance in his work, acting as a generous and nurturing mother for the artist, generating deep and inspiring artwork, which is still ongoing today. The second place with the most influence on his work doesn’t have a proper noun like the one of a country, it is the place found on islands. Islands fascinate him at least as much as women do. The first island Francesco Clemente came across was Jamaica, and a love story unfolded giving birth to a great number of watercolours. These have all been assembled into a book entitled “The book of the sea” where man is studied from a more tribal angle. When Francesco Clemente is asked how he came to know St Barthelemy, he simply answers: ‘through friends’. Indeed, what better representation can one make of the tribe constituting the population of

this small island, where induction by one of its members is necessary if one does not want to remain behind the doors of artificial appearance. ‘Community relationships can be developed everywhere, even in big capital cities’, says Francesco. ‘On an island like St Barthelemy, however, they become an essential part of daily life’. Francesco Clemente is a regular here and has been since the 1970s. He used to rent a house by the beach in Lorient. He likes the ring to the name ‘Lorient’, which he feels he should write as ‘L’Orient’ (the Orient, the East). The exhibition at the Musée Territorial de St Barthélemy is not a retrospective but a message of love for St Barthelemy, for which artworks have been specially created. With this in mind, he has chosen to work around a poem written by Derek Walcott – poet, playwright and literature Nobel Prize winner from St Lucia, whose work depicts life in the West Indies. Exhibition supporters Bill Katz – La Collectivité de St Barthélemy – Le Ministère des Outre-mer – Fergus McCaffrey – le Bureau d’Etude Xavier David – Maria Angela Ventura – Rory &amp; Elizabeth Brooks – Anne Van Milders – May’s To Go – Randy &amp; Maya Gurley – Tom Beach – Chopard – Chateau La Coste – Isabelle Gros Kowal – Christopher Cartwright – FIDEM – Budget – St Barth Evasion – Space SBH Gallery About St Barth Ile d’Art St. Barth Ile d’Art (SBIA) is an organization created in 2013 by Nicole Peraud, Valentine de Badereau and Fergus McCaffrey. As a non-profit organization, SBIA works in close collaboration with the Collectivity’s cultural committee to promote St Barthelemy’s artistic heritage. With unique cultural wealth unequalled in the Caribbean, St Barthelemy is an art island. The quality of artists, curators, writers and collectors the island attracts is astonishing. SIBA wishes to help the island of St Barthelemy promote its culture of the arts. Our proposal is to develop a strategy through exhibitions and artistic projects within the island’s existing structures and outdoor public spaces.