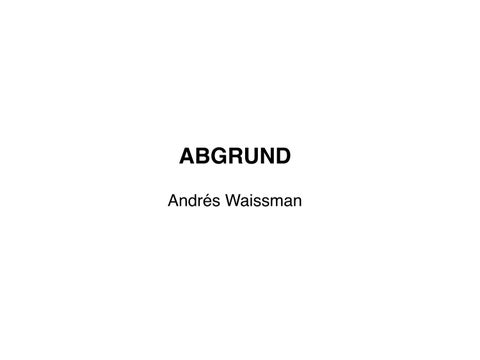 ABGRUND! ! The first question that comes up whenever facing a new exhibition from an artist is about the itinerary, about how to get to this current work, the last. The immediate antecedent is right here and its presence can prove it. The previous series from Andrés Waissman, Viruta, already contained this painting. Its tridimensional and “uterus-topic” material made the utopian notion of progress take the strain, till it showed evidence for its fault. That series involving steel wool/matrices/matrix, with its own side of endometrial hospitality and urban-industrial-like inclemency, revealed itself to be sensitive to time, to be rusty, and possibly ruled out. The artist let us have a closer look at it, and then, its sharp and rhizome-like filaments, its conglomerate and tangles showed evidence for the nature of the postmodern city already saturated and unbreathable. If there was a time when those metal nests were similar to stays in a shelter, it was only something necessary, a first moment to show us, then, the effect of the use, the wear and tear, new conditions of the experience. Progress has not always meant moving forward.! ! The same echo of Waissman’s work is the one we were able to appreciate a couple of months ago in Buenos Aires, in the work by the Düsseldorf’s school photographers, cyclopean and devouring cities that -as the steel wools- lost their center because they identified themselves with the territory they are occupying. The Multitudes series, which suggested the extensive dispersion of the wandering man, made some room for Viruta that –the same way Gursky’s May Day does- shows the compulsory proximity and, as paradoxical as it may seem, causes the same suffocation than that one originated from those empty spaces –no people, no meaning- we have seen in Candida Hofer’s photos.! !

There is no doubt that the word that accounts for the urban, industrial and modern-like, and its tear and wear is the one that addresses topologically the deepest truth about Multitudes and Viruta: density. It can be seen diffused in the first scenario and under pressure in the second one, always a coexistence of an indefinite number of particles and centers of action. An absolute surpassing of the romanticism of the proximity on which basis the modern moralists wanted to explain to us the openness of the subject to the big Other.! ! Peter Sloterdijk, German philosopher, suggests that not only in the inside but also on the outside of the spherical global culture, artists that are capable of coming up with metaphors for the new stage of the human condition have emerged. Many of them are around the periphery, says the philosopher without naming anyone. Waissmanâ&amp;#x20AC;&amp;#x2122;s art has those qualities that follow Sloterdijkâ&amp;#x20AC;&amp;#x2122;s line: &quot;multi-spherical foams -that in this side of the periphery are steel shavings- that interfere with the atomizer isolation, that multiply the diversity of connections, the constant mobility of the interconnected dots, and that boost the irregularity of the global comprehensive structure. To inhabit the foam from the peripheries means that the idea itself of a global society ends up being questionable, this implies a point of view that is external to the bubble itself, from the outside of a structured whole, organized and allegedly intelligibleâ&amp;#x20AC;?. !

From that Argentinian border towards a global perspective is where ABGRUND emerges, strengthened since it has matured, its exciting beauty, volcanic, reverberating in black and white. Absolutely contemporary, this work is not so much a scene as it is more pure action. It is impossible not to feel the beat of a world in display. AndrĂŠs Waissman, as well as the wise Tiresias, is a blind and a sighted person. As a blind person he paints that other side, that other knowledge that dilutes in the deceptions of the eye; as a blind sighted person he seems to share with the occultism, and maybe also with a great deal of poetry, that saying that the dark side of the truth can also, in its way, illuminate the world. It is just that we have to see that truth through eyes other than the eyes. The painter in his blindness is not able to see the obviousness, the convenient, the advisable, and in his withdrawal opens/ paints on the world another point of view, a bit less submissive under the light of men and their matters, not that much of a slave of the public light. ! ! He is seeking shelter in the narrow corner of his own privacy, away from the avenging light of ordinary reason. The further he goes into the darkness, the more enlightened he walks. Each canvas, then, as a contraction of a dilated pupil constitutes the power of a world. The analogue wealth of the glare seems to engrave each iris with the strength of lightning. A mutation takes place before its word; a mutation of archaic fantasies disrupting any artifice by light. Mythological animals with strange shapes are emerging from the shadows, as if from the cave of Plato. And the artist&#39;s soul, as well as the one in that person watching, becomes tepid wax where those animals/monsters/shapes, can make us learn something about ourselves.!

The nocturnal aura of these pictures is the state of mind of the dream preceding the event that links the primitive scream to the founding of a social tissue that still does not fit. The unnameable working against the Nothing. The exquisite technical brooch of the work combines sobriety and richness. The expression of exact beauty involves sparing no materials, giving the best to it providing we avoid any remaining. And in that sense Waissman goes back to his own field though revitalized; thus he can be the contemporary artist and, at the same time, keep the ethics of his powerful images. If his paintings at the early Eighties named -by that time already- the unnameable of genocide, if during the times of squandering money his crowd would question about the fate of the sociallyexcluded, those words are not to be left out from the silence of this work. Because the optical unconscious lets us see (shows us it sees) exactly the invisible, all of that which is removed from representation -the event, the glorious display of difference. Facing the fundus of the eye (in Spanish Fondo de Ojo), what has been seen cedes so that -as a second shutter- the time of the story that revitalizes the image with the strength of the myth, with the symbolical power that is provided by the world-founding strength, can be introduced in that scarce and fleeting instantaneity. ! ! Andrés Waissman is an artist that also knows about geology; about mutation of successive memory layers in ethical art. He knows that Society can only exist if the history&#39;s sores sculpt the retina and let themselves to be painted, that way: simple, powerful, beautiful, as folds of the future, initial explosions, movement, swell, shudder, Big Bang. It is Andrés Waissman&#39;s terrible and irresistible bad habit: to place at the small door of the instantaneous those non-places which enable us to think about the coming and opening of &quot;other possible worlds&quot;.! ! ! ! ! ! ! Daniela Gutiérrez! Researcher, Essay writer ! FLACSO – IVSA (International Visual Sociology Association)!

General View of the exhibition!

!AndrĂŠs Waissman (Buenos Aires, 1955), is a key figure in Argentine contemporary art whose work finds inspiration in the realms of history, sociology and cartography. He was educated at independent studios. His first solo exhibitions were held at Lirolay gallery, Buenos Aires in 1973 and 1977. He traveled to Europe in 1974 and worked in the studio of Augusto Torres in Barcelona for a year, then in 1978 with Antonio Segui in Paris. In 1984 he moved to San Francisco, USA, where he developed an extensive international career. In 1992 he returned to Buenos Aires. ! ! He lives and works in Buenos Aires where he is involved in an intense teaching practice. He is part of the curatorial team of PAC Project - Contemporary Artistic Practices, an annual program of encounters and international art residencies for the analysis, review and production of art, along with Rodrigo Alonso, Eduardo StupĂ­a, Gabriel Valansi and Rafael Cippolini.!

has had numerous international solo shows and has participated of more than sixty group shows,

! His works belong to important private collections and international museums such as: University of Essex Collection of Latinamerican Art, (UECLAA) U.K.; Museum of Latin American Art, Long Beach, CA; Jack Blanton Museum of Art, The University of Texas at Austin; Judah Magnes Museum, Berkeley, California; Galleria Civica d´arte Contemporanea F. Pizzo, Palazzo Spano Burgio, Marsala, Italia; Museo de Arte Contemporáneo de Buenos Aires; Colección Universidad Di Tella, Buenos Aires; Colección UADE, Buenos Aires; Museo Castagnino-MACRO de arte contemporáneo, Rosario; Colección Museo Killka, Mendoza, among others. ! ! !Some of his most emblematic series such as Las Multitudes, El Alfabeto Perdido, the black and white paintings from Fondo de Ojo, the Mythological Animals and his recent Virutas, confirm him as an artist of singular views. His work is not only visual but conveys a deep philosophical and political commitment. Nomadism, migrations, multitudes appearing around the globe, are some of the concepts he has devoloped over the last twenty years. He is represented by Space SBH and Gachi Prieto Gallery.!