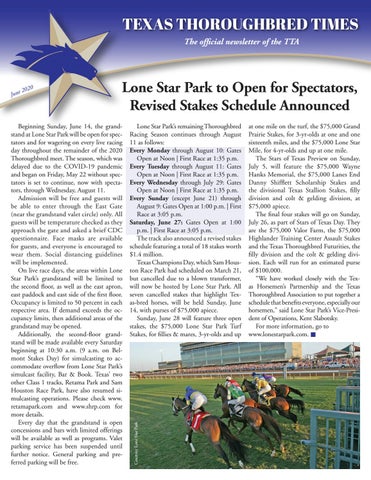 TEXAS THOROUGHBRED TIMES The official newsletter of the TTA

Beginning Sunday, June 14, the grandstand at Lone Star Park will be open for spectators and for wagering on every live racing day throughout the remainder of the 2020 Thoroughbred meet. The season, which was delayed due to the COVID-19 pandemic and began on Friday, May 22 without spectators is set to continue, now with spectators, through Wednesday, August 11. Admission will be free and guests will be able to enter through the East Gate (near the grandstand valet circle) only. All guests will be temperature checked as they approach the gate and asked a brief CDC questionnaire. Face masks are available for guests, and everyone is encouraged to wear them. Social distancing guidelines will be implemented. On live race days, the areas within Lone Star Park’s grandstand will be limited to the second floor, as well as the east apron, east paddock and east side of the first floor. Occupancy is limited to 50 percent in each respective area. If demand exceeds the occupancy limits, then additional areas of the grandstand may be opened. Additionally, the second-floor grandstand will be made available every Saturday beginning at 10:30 a.m. (9 a.m. on Belmont Stakes Day) for simulcasting to accommodate overflow from Lone Star Park’s simulcast facility, Bar & Book. Texas’ two other Class 1 tracks, Retama Park and Sam Houston Race Park, have also resumed simulcasting operations. Please check www. retamapark.com and www.shrp.com for more details. Every day that the grandstand is open concessions and bars with limited offerings will be available as well as programs. Valet parking service has been suspended until further notice. General parking and preferred parking will be free.

at one mile on the turf, the $75,000 Grand Prairie Stakes, for 3-yr-olds at one and one sixteenth miles, and the $75,000 Lone Star Mile, for 4-yr-olds and up at one mile. The Stars of Texas Preview on Sunday, July 5, will feature the $75,000 Wayne Hanks Memorial, the $75,000 Lanes End Danny Shifflett Scholarship Stakes and the divisional Texas Stallion Stakes, filly division and colt & gelding division, at $75,000 apiece. The final four stakes will go on Sunday, July 26, as part of Stars of Texas Day. They are the $75,000 Valor Farm, the $75,000 Highlander Training Center Assault Stakes and the Texas Thoroughbred Futurities, the filly division and the colt & gelding division. Each will run for an estimated purse of $100,000. “We have worked closely with the Texas Horsemen’s Partnership and the Texas Thoroughbred Association to put together a schedule that benefits everyone, especially our horsemen,” said Lone Star Park’s Vice-President of Operations, Kent Slabotsky. For more information, go to www.lonestarpark.com. n

HIT THE TEXAS TRIFECTA! Get a Three-Year TTA Membership for the Price of Two!

All renewals and new memberships will be entered into a drawing for a free lifetime TTA membership valued at $2,000!

here has never been a better time to be involved in Texas racing and breeding with $25 million annually being injected into the industry thanks to new legislation. And there has never been a better time to join the Texas Thoroughbred Association or renew your membership with this special promotion offering one year free with any three-year membership or renewal. Even if your current membership is not due to expire soon, you can still take advantage of this deal. Help yourself to savings while also helping our Thoroughbred athletes after they leave the track! For every new membership or renewal through this promotion, the TTA will donate $20 to your choice of Thoroughbred aftercare organizations. You can choose to have your donation go to: • LOPE TEXAS (www.lopetx.org) • REMEMBER ME RESCUE (www.teamkeen.com) • THE PADDOCK FOUNDATION (www.paddockfoundation.com) To take advantage of this offer, call the TTA office at (512) 458-6133 or go to www.texasthoroughbred.com.

The 2019 Texas Champion horses and horsemen, which normally would have been honored during the Texas Thoroughbred Association’s annual meeting and awards banquet, will instead be showcased online with a video presentation highlighting their achievements. Due to the COVID-19 pandemic, the TTA’s annual event in March was postponed. “We still hope to get our members and award winners together for an event later this year, but due to the uncertainty of whether that will happen we decided to put our awards video online to honor all the winners,” said Mary Ruyle, executive director of the TTA. “We invite TTA members and all horsemen, horsewomen and racing fans to join us on our Facebook page (facebook.com/TexasThoroughbredAssociation) on Sunday, June 14 at 5 p.m. Central to watch the premiere of the video, and it will be available for replay after that. That’s the same day Lone Star Park will present the Texas Champion Day stakes originally scheduled to be held at Sam Houston Race Park, so we are likely to see some future and current champions in action on the track.” The equine award winners, topped by Texas Horse of the Year Mr Money Bags, were announced in January, but the human award winners are not normally revealed until the awards banquet. The human award winners for 2019 are three of the most accomplished horsemen in the Lone Star State. There are two recipients

of the Allen Bogan Memorial Award, named for the longtime Texas turf writer and formerly known as the TTA Member of the Year. Noted veterinarian Charles W. Graham earned his second Allen Bogan Award for his efforts to help pass House Bill 2463, which injects up to $25 million annually into the Texas horse industry. Dr. Graham previously earned the TTA’s T.I. “Pops” Harkins Award for lifetime achievement and is a member of the American Quarter Horse Hall of Fame, the Texas Rodeo Cowboy Hall of Fame and the Texas Horse Racing Hall of Fame, among many other accolades and awards. The co-winner of this year’s Bogan Award is longtime industry executive Jeff Hooper. Over a span of decades working in Texas, Hooper has held top positions at the TTA, National Cutting Horse Association and Lone Star Park at Grand Prairie. Like Dr. Graham, Hooper was instrumental in the effort to pass House Bill 2463. Hooper currently works as chairman and CEO of Highlander Training Center in Sulphur Springs, Texas. The T.I. “Pops” Harkins Award for lifetime achievement goes to native Texan Bret Calhoun. Perennially among the leading trainers both in Texas and nationally, Calhoun has trained two Breeders’ Cup winners, Chamberlain Bridge and Dubai Majesty, both for Texas connections. He’s also had great success with Texas-bred runners over the years, most notably in the colors of Texas’ Valor Farm. All told, Calhoun has

The TTA is pleased to announce a consignor incentive program for the August 24 Texas Summer Yearling and Horses of Racing Age Sale at Lone Star Park. Thanks to the passage of H.B. 2463, which injects up to $25 million annually into the Texas horse industry, funds are available to rebate up to half of the $400 consignment fee for all horses passing through the ring, including horses not bred in Texas. Entries are due by June 15. A similar incentive was previously announced for the Texas 2-Year-Olds in Training Sale. That auction was cancelled due to the COVID-19 pandemic, and all consignment fees were refunded. Instead of a live auction, horses entered in that sale are currently being showcased on the TTA Sales website with potential buyers being able to connect directly with consignors to negotiate private sales with no additional fees. The Texas Summer Yearling Sale has traditionally included a mixed session for broodmares and weanlings, but for this year’s auction only, that format will change to a horses of racing age session focused on 2-year-olds. If there is sufficient demand, an under tack show may be added prior to the sale. “We know that these are challenging times for horsemen, so in order to adapt to the current situation we rolled over the consignment incentive to this sale and changed the format to give consignors an option for selling 2-year-olds and other horses of racing age,” said Mary Ruyle, executive director of the TTA. “We had a record number of entries for the 2-year-old sale, so we expect to have strong participation in this sale as well. We are truly thankful for all the consignors and buyers that have helped make this such an important sale for the Southwest region.” For more information and a consignment form go to www.ttasales.com. n