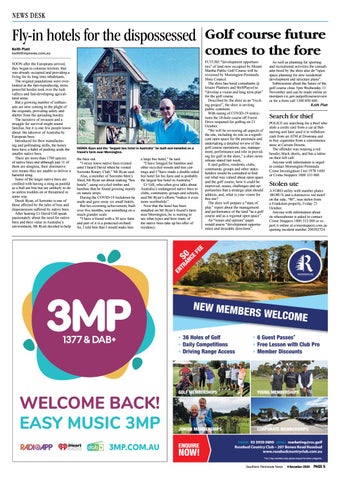 comes to the fore

SOON after the Europeans arrived, they began to colonise territory that was already occupied and providing a living for its long time inhabitants. The original populations were overlooked as the fast-reproducing, more powerful hordes took over the lush valleys and fast-developing agricultural areas. But a growing number of enthusiasts are now coming to the plight of the originals, providing safety and shelter from the spreading hordes. The narrative of invasion and a struggle for survival might sound familiar, but it is one few people know about: the takeover of Australia by European bees. Introduced for their manufacturing and pollinating skills, the honey bees have a habit of pushing aside the smaller native bees. There are more than 1700 species of native bees and although just 11 of them are stingless, their diminutive size means they are unable to deliver a harmful sting. Some of the larger native bees are credited with having a sting as painful as a bull ant bite but are unlikely to do so unless trodden on or threatened in some way. Derek Ryan, of Sorrento is one of those affected by the tales of loss and dispossession suffered by native bees. After hearing Cr David Gill speak passionately about the need for native bees and their value to Australia’s environment, Mr Ryan decided to help

FUTURE “development opportunities” of land now occupied by Mount Martha Public Golf Course will be reviewed by Mornington Peninsula Shire Council. The shire has hired consultants @ leisure Planners and WellPlayed to “develop a vision and long term plan” for the golf course. Described by the shire as an “exciting project”, the shire is inviting public comment. With easing of COVID-19 restrictions the 18-hole course off Forest Drive reopened for golfing on 21 October. “We will be reviewing all aspects of the site, including its role as a significant open space for the peninsula and undertaking a detailed review of the golf course operations, use, management, performance and role in providing for golf in the shire,” a shire news release stated last week. It said golfers, residents, clubs, community groups and other stakeholders would be consulted to find out what was valued about open space and the golf course; how it could be improved; issues, challenges and opportunities that a strategic plan should address; and, what is your vision for this site? The shire will prepare a “state of play” report about the management and performance of the land “as a golf course and as a regional open space”. An “issues and options” paper would assess “development opportunities and desirable directions”.

DEREK Ryan and the “largest bee hotel in Australia” he built and installed on a friend’s farm near Mornington.

a large bee hotel,” he said. “I have foraged for bamboo and other recycled woods and tree cuttings and I “have made a double sided bee hotel for his farm and is probably the largest bee hotel in Australia.” Cr Gill, who often give talks about Australia’s endangered native bees to clubs, community groups and schools, said Mr Ryan’s efforts “makes it even more worthwhile”. Now that the hotel has been installed on Mr Ryan’s friend’s farm near Mornington, he is waiting to see what types and how many of the native bees take up his offer of residency.

Search for thief POLICE are searching for a thief who stole a credit card from a car at Balnarring and later used it to withdraw cash from an ATM at Dromana and to buy cigarettes from a convenience store at Carrum Downs. The offender was wearing a red hoodie, black shorts, and has a tattoo on their left calf. Anyone with information is urged to contact Mornington Peninsula Crime Investigation Unit 5978 1400 or Crime Stoppers 1800 333 000.

Stolen ute A FORD utility with number plates 1RO8UX and a distinctive red motif on the side, “80”, was stolen from a Frankston property, Friday 25 October. Anyone with information about its whereabouts is asked to contact Crime Stoppers 1800 333 000 or report it online at crimestoppers.com.au quoting incident number 200392724.

the bees out. “I never knew native bees existed until I heard David when he visited Sorrento Rotary Club,” Mr Ryan said. Also, a member of Sorrento Men’s Shed, Mr Ryan set about making “bee hotels”, using recycled timber and bamboo that he found growing mainly on nature strips. During the COVID-19 lockdown he made and gave away six small hotels. But his crowning achievement, built over five months, was something on a much grander scale. “I have a friend with a 30 acre farm and part of it is a protected orchard. So, I told him that I would make him

As well as planning for sporting and recreational activities the consultants hired by the shire also do “open space planning for new residential development and structure plans”. Submissions about the future of the golf course close 5pm Wednesday 11 November and can be made online atmornpen.vic.gov.au/golfcoursereview or for a form call 1300 850 600. Keith Platt