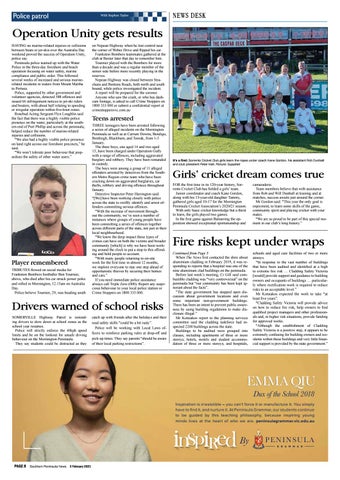 Operation Unity gets results HAVING no marine-related injuries or collisions between boats or jet-skis over the Australia Day weekend proved the success of Operation Unity, police say. Peninsula police teamed up with the Water Police in the three-day foreshore and beach operation focusing on water safety, marine compliance and public order. This followed several weeks of increased and serious marinerelated incidents in waters from Mount Martha to Portsea. Police, supported by other government and volunteer agencies, detected 588 offences and issued 66 infringement notices to jet-ski riders and boaters, with about half relating to speeding or irregular operation within five-knot zones. Rosebud Acting Sergeant Flyn Loughlin said the fact that there was a highly visible police presence on the water, particularly at the southern end of Port Phillip and across the peninsula, helped reduce the number of marine-related injuries and collisions. “We also had a highly visible police presence on land right across our foreshore precincts,” he said. “We won’t tolerate poor behaviour that jeopardises the safety of other water users.”

Player remembered TRIBUTES flowed on social media for Frankston Bombers footballer Ben Tournier, above, who died after his car struck power poles and rolled in Mornington, 12.15am on Australia Day. Police believe Tournier, 29, was heading south

on Nepean Highway when he lost control near the corner of Weber Drive and flipped his car. Frankston Bombers teammates gathered at the club at Baxter later that day to remember him. Tournier played with the Bombers for more than a decade and was a regular member of the senior side before more recently playing in the reserves. Nepean Highway was closed between Strachans and Bentons Roads, both north and south bound, while police investigated the incident. A report will be prepared for the coroner. Anyone who saw the crash, or who has dashcam footage, is asked to call Crime Stoppers on 1800 333 000 or submit a confidential report at crimestoppersvic.com.au

Teens arrested THREE teenagers have been arrested following a series of alleged incidents on the Mornington Peninsula as well as at Carrum Downs, Bendigo, Bentleigh, Blackburn, and Toorak, from 1-5 January. The three boys, one aged 14 and two aged 15, have been charged under Operation Gully with a range of offences, including aggravated burglary and robbery. They have been remanded in custody. The boys were among a group of 11 alleged offenders arrested by detectives from the Southern Metro Region crime team who have been cracking down on aggravated burglaries, car thefts, robbery and driving offences throughout January. Detective Inspector Peter Harrington said: “[We] have been working closely with police across the state to swiftly identify and arrest offenders committing serious offences. “With the increase of movement throughout the community, we’ve seen a number of instances where groups of young people have been committing a series of offences together across different parts of the state, not just in their local neighbourhood. “We know the deep impact these types of crimes can have on both the victims and broader community [which] is why we have been working around the clock to put a stop to this offending and hold people to account. “With many people returning to on-site work for the first time in almost 12 months, we implore everyone to stay one step ahead of opportunistic thieves by securing their homes and cars.” If you need immediate police assistance always call Triple Zero (000). Report any suspicious behaviour to your local police station or Crime Stoppers on 1800 333 000.

Drivers warned of school risks SOMERVILLE Highway Patrol is reminding drivers to slow down at school zones as the school year resumes. Police will strictly enforce the 40kph speed limits and be on the lookout for unsafe driving behaviour on the Mornington Peninsula. They say students could be distracted as they

catch up with friends after the holidays and their road safety skills “could be a bit rusty”. Police will be working with Local Laws officers to reinforce parking rules at drop-off and pick-up times. They say parents “should be aware of their local parking restrictions”.

Girls’ cricket dream comes true camaraderie. Team members believe that with assistance from Rob and Will Dunball at training and at matches, success awaits just around the corner. Mr Gordon said: “This year the only goal is enjoyment, to learn some skills of the game, community spirit and playing cricket with your mates. “We are so proud to be part of this special moment in our club’s long history.”

FOR the first time in its 120-year history, Sorrento Cricket Club has fielded a girls’ team. Junior coordinator and coach Kane Gordon, along with his 13-year-old daughter Tammy, gathered girls aged 10-17 for the Mornington Peninsula Cricket Association’s 2020/21 season. With only basic cricket knowledge but a thirst to learn, the girls played two games. In the first game against Balnarring the opposition showed exceptional sportsmanship and

Fire risks kept under wraps Continued from Page 5 When The News first contacted the shire about aluminium cladding in February 2019, it was responding to reports that a hospital was one of the nine aluminium clad buildings on the peninsula. Before last week’s meeting, Cr Gill said combustible cladding was “very controversial” on the peninsula but “our community has been kept ignorant about the facts”. "The state government has stopped open discussion about government locations and even some important non-government buildings. There has been an intent to prevent public awareness by using building regulations to make disclosure illegal.” Mr Kotsiakos report to the planning services committee said the cladding taskforce had inspected 2200 buildings across the state. Buildings to be audited were grouped into classes, including apartments of three or more storeys; hotels, motels and student accommodation of three or more storeys; and hospitals,

schools and aged care facilities of two or more storeys. “In response to the vast number of buildings that have been audited and identified at a high to extreme fire risk … Cladding Safety Victoria [would] provide support and guidance to building owners and occupants of buildings … particularly where rectification work is required to reduce risks to an acceptable level.” Mr Kotsiakos expected the work to take “at least five years”. “Cladding Safety Victoria will provide advice on how to reduce fire risk, help owners to find qualified project managers and other professionals and, in higher risk situations, provide funding for approved works. “Although the establishment of Cladding Safety Victoria is a positive step, it appears to be extremely confusing for building owners and residents within these buildings and very little financial support is provided by the state government.”

Inspiration is irresistible – you can’t force it or manufacture it. You simply have to find it, and nurture it. At Peninsula Grammar, our students continue to be guided by this teaching philosophy, because inspiring young minds lives at the heart of who we are. peninsulagrammar.vic.edu.au