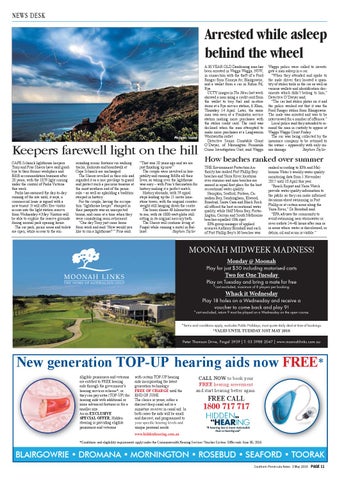 Arrested while asleep behind the wheel

Keepers farewell light on the hill CAPE Schanck lighthouse keepers Tony and Prue Sheers have said goodbye to their former workplace and B&B accommodation business after 20 years, with the 1859 light coming under the control of Parks Victoria this week. Parks has assumed the day-to-day running of the site until, it says, a commercial lease is signed with a new tenant. It will offer free visitor access into the light station reserve from Wednesday 4 May. Visitors will be able to explore the reserve grounds during normal park opening hours. The car park, picnic areas and toilets are open, while access to the sur-

rounding scenic features via walking tracks, lookouts and boardwalk at Cape Schanck are unchanged. The Sheers revelled in their role and regarded it as a rare privilege to guard and protect such a precious treasure at the most southern end of the peninsula â&#x20AC;&#x201C; as well as upholding a tradition steeped in history. For the couple, having the occupation â&#x20AC;&#x153;lighthouse keeperâ&#x20AC;? stamped in their passports was an unexpected bonus, and came at a time when they were considering semi-retirement. â&#x20AC;&#x153;One day Tony just came home from work and said â&#x20AC;&#x2DC;How would you like to run a lighthouse?â&#x20AC;&#x2122;â&#x20AC;? Prue said.

â&#x20AC;&#x153;That was 20 years ago and we are just finishing up now.â&#x20AC;? The couple were involved in hospitality and running B&Bs all their lives, so taking over the lighthouse was easy â&#x20AC;&#x201C; with Prueâ&#x20AC;&#x2122;s fascination for history making it a perfect match. History abounds, with 59 spiral steps leading up the 21 metre limestone tower, with the original counterweight still hanging down the centre. The beam shines 48 kilometres out to sea, with its 1000-watt globe still sitting in its original mercury bath. The Sheers will continue living at Fingal while running a motel in Ballarat. Stephen Taylor

A 30 YEAR OLD Dandenong man has been arrested in Wagga Wagga, NSW, in connection with the theft of a Ford Ranger from Koonya Av, Blairgowrie, and a wallet from a car in Robin Pd, Rye. CCTV images in The News last week showed a man using a credit card from the wallet to buy fuel and in-store items at a Rye service station, 6.30am, Thursday 14 April. Later, the same man was seen at a Frankston service station making more purchases with the stolen credit card. The card was declined when the man attempted to make more purchases at a Langwarrin Woolworths outlet. Detective Senior Constable Grant Oâ&#x20AC;&#x2122;Dwyer, of Mornington Peninsula Crime Investigation Unit, said Wagga

Wagga police were called to investigate a man asleep in a car. â&#x20AC;&#x153;When they attended and spoke to the male driver they located a quantity of stolen tools in the car as well as various wallets and identification documents which didnâ&#x20AC;&#x2122;t belong to him,â&#x20AC;? Detective Oâ&#x20AC;&#x2122;Dwyer said. â&#x20AC;&#x153;The car had stolen plates on it and the police worked out that it was the Ford Ranger stolen from Blairgowrie. The male was arrested and was to be interviewed for a number of offences.â&#x20AC;? Local police said they intended to remand the man in custody to appear at Wagga Wagga Court Friday. The car was being collected by the insurance company to be returned to the owner â&#x20AC;&#x201C; apparently with only minor damage. Stephen Taylor

ranked according to EPA and Melbourne Waterâ&#x20AC;&#x2122;s weekly water quality monitoring data from 1 November 2015 until 10 April this year. â&#x20AC;&#x153;Beach Report and Yarra Watch provide water quality information to the public so they can make informed decisions about swimming in Port Phillip or at certain areas along the Yarra River,â&#x20AC;? Dr Boxshall said. â&#x20AC;&#x153;EPA advises the community to avoid swimming near stormwater or river outlets 24â&#x20AC;&#x201C;48 hours after rain or in areas where water is discoloured, or debris, oil and scum is visible.â&#x20AC;?

Two for One Tuesday Play on Tuesday and bring a mate for free *cart excluded, maximum of 8 players per booking.

Whack it Wednesday Play 18 holes on a Wednesday and receive a voucher to come back and play 9! *cart excluded, return 9 must be played on a Wednesday on the open course. *Terms and conditions apply, excludes Public Holidays, must quote daily deal at time of bookings.

with certain TOP-UP hearing aids incorporating the latest generation technology FREE OF CHARGE until the END OF JUNE The choice is yours, either a discreet deep canal aid or a miniature receiver in canal aid. In both cases the aids will be small and discreet, and programmed to \RXUVSHFLÂżFKHDULQJOHYHOVDQG unique personal needs.