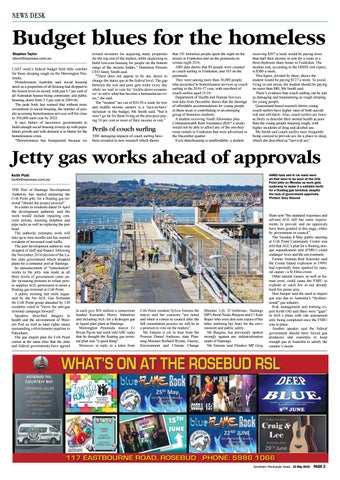 Budget blues for the homeless Stephen Taylor steve@mpnews.com.au LAST week’s federal budget held little comfort for those sleeping rough on the Mornington Peninsula. Homelessness Australia said social housing stock as a proportion of all housing had dropped to the lowest level on record, with just 4.7 per cent of all Australian houses being community and public housing, down from 5.3 per cent in 2005-06. The peak body has warned that without more investment in social housing, the number of people accessing homelessness services will hit close to 350,000 each year by 2022. It says failure of successive governments to build enough social housing to keep up with population growth and with demand is to blame for the homelessness crisis. “Homelessness has bourgeoned because we

reward investors for acquiring many properties for the top end of the market, while neglecting to build low-cost housing for people on the bottom rungs of the income ladder,” Homeless Persons CEO Jenny Smith said. “There does not appear to be any desire to change the status quo at the federal level. The gap between the rich and poor gets wider every day while we wait in vain for ‘trickle-down economics’ to solve what has become a humanitarian crisis,” she said. The “modest” tax cut of $10.50 a week for low and middle income earners is a ‘nice-to-have’ inclusion in the budget, Ms Smith said, “but it won’t go far for those living on the precipice paying 50 per cent or more of their income in rent.”

that 191 homeless people spent the night on the streets in Frankston and on the peninsula on census night 2016. ABS data shows that 89 people were counted as couch surfing in Frankston, and 103 on the peninsula. They were among more than 30,000 people who presented to homelessness services as couch surfing in the 2016-17 year, with one-third of couch surfers aged 15-24. Department of Health and Human Services rent data from December shows that the shortage of affordable accommodation for young people in these areas is contributing to an emerging group of homeless students. A student receiving Youth Allowance plus Commonwealth Rent Assistance ($267 a week) would not be able to afford any of the one-bedroom rentals in Frankston that were advertised in the December quarter. Even sharehousing is unaffordable: a student

receiving $267 a week would be paying more than half their income in rent for a room in a three-bedroom share house in Frankston. The median rent, according to the DHHS rent report, is $380 a week. This figure, divided by three, shows the student would be paying $127 a week. To avoid living in rent stress, the student should be paying no more than $80, Ms Smith said. There’s evidence that couch surfing can be just as damaging and traumatising as rough sleeping for young people. Queensland-based research shows young couch surfers have higher rates of both suicide risk and self-harm. Also, couch surfers are twice as likely to describe their mental health as poor than the young people sleeping rough, with higher incidents of drug and alcohol use. Ms Smith said couch surfers were frequently being coerced to provide sex for a place to sleep, which she described as “survival sex”.

Jetty gas works ahead of approvals Keith Platt keith@mpnews.com.au THE Port of Hastings Development Authority has started preparing the Crib Point jetty for a floating gas terminal “should the project proceed”. In a letter to residents dated 24 April the development authority said the work would include repairing concrete pylons, mooring dolphins and pipe racks as well as replacing the pier head. The authority estimates work will take up to nine months and has warned residents of increased road traffic. The port development authority was stripped of staff and finance following the November 2014 election of the Labor state government which dropped plans for a container port at Hastings. Its announcement of “remediation” works to the jetty was made as all three levels of government come under increasing pressure to refuse power supplier AGL permission to moor a floating gas terminal at Crib Point. A public meeting last week organised by the No AGL Gas Terminus for Crib Point group attended by 130 residents voted to “move the anti-gas terminal campaign forward”. Speakers described dangers to health and the environment of Western Port as well as land rights issues surrounding a 60-kilometre pipeline to Pakenham. The gas import plan for Crib Point comes at the same time that the state and federal governments have agreed

HARD hats and hi vis vests were all that were to be seen at the Crib Point jetty on Monday as work gets underway to make it a suitable berth for a floating gas terminal, despite the lack of government approvals. Picture: Gary Sissons

to each give $50 million a consortium headed Kawasaki Heavy Industries and including AGL for a hydrogen gas to liquid pilot plant at Hastings. Mornington Peninsula mayor Cr Bryan Payne last week told ABC radio that he thought the floating gas terminal plan was “a good thing”. However, in reply to a letter from

Crib Point resident Sylvia Simons the mayor said her concerns “are noted and when it comes to council after the full consultation process we will be in a position to vote on the matters”. Ms Simons is yet to hear from the Premier Daniel Andrews, state Planning Minister Richard Wynne, Enerny, Environment and Climate Change

Hunt sent “the standard responses and advised AGL still has some requirements to provide and no approvals have been granted at this stage, either by government or council”. The Tuesday 8 May public meeting at Crib Point Community Centre was told that AGL’s plan for a floating storage regasification unit (FSRU) could endanger lives and the environment. Former fireman Rod Knowles said the Coode Island explosion in 19991 had reportedly been sparked by natural causes - a St Elmo event. Other natural causes, as well as human error, could cause the FSRU to explode or catch fire in our already bush fire prone area. Don Juniper said the need to import gas was due to Australia’s “dysfunctional” gas industry. Risk management and training expert Keith Old said there were “gaps” in AGL’s plans with risk assessment only being completed once the FSRU was in place. Another speaker said the federal government should have forced gas producers and exporters to keep enough gas in Australia to satisfy the country’s needs.