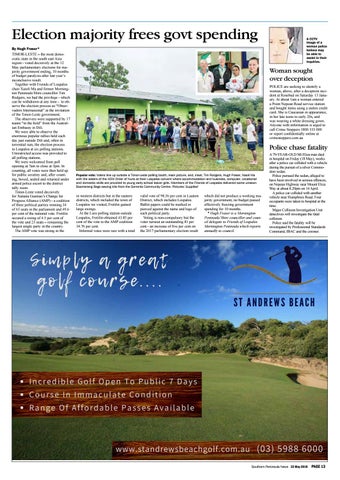 Election majority frees govt spending By Hugh Fraser* TIMOR-LESTE – the most democratic state in the south east Asia region - voted decisively at the 12 May parliamentary elections for majority government ending, 10 months of budget paralysis after last year’s inconclusive result. Together with Friends of Lospalos chair Xaioli Ma and former Mornington Peninsula Shire councillor Tim Rodgers, we had the privilege - which can be withdrawn at any time - to observe the election process as “Observadors Internasional” at the invitation of the Timor-Leste government. The observers were supported by 17 teams “in the field” from the Australian Embassy in Dili. We were able to observe the enormous popular rallies held each day just outside Dili and, often in torrential rain, the election process in Lospalos at six polling stations. Unrestricted access was provided to all polling stations. We were welcomed from poll opening at 7am to close at 3pm. In counting, all votes were then held up for public scrutiny and, after counting, boxed, sealed and returned under armed police escort to the district tally room. Timor-Leste voted decisively for Xanana Gusmao’s Change for Progress Alliance (AMP) - a coalition of three political parties winning 34 of 65 seats in the parliament and 49.6 per cent of the national vote. Fretilin secured a swing of 4.5 per cent of the vote and 23 seats – remaining the largest single party in the country. The AMP vote was strong in the

A CCTV image of a woman police believe may be able to assist in their inquiries.

Woman sought over deception POLICE are seeking to identify a woman, above, after a deception incident at Rosebud on Saturday 13 January. At about 1am a woman entered a Point Nepean Road service station and bought items using a stolen credit card. She is Caucasian in appearance, in her late teens to early 20s, and was wearing a white dressing gown. Anyone with information is urged to call Crime Stoppers 1800 333 000 or report confidentially online at crimestoppers.com.au

Popular vote: Voters line up outside a Timor-Leste polling booth, main picture, and, inset, Tim Rodgers, Hugh Fraser, Xiaoli Ma with the sisters of the ADM Order of Nuns at their Lospalos convent where accommodation and business, computer, vocational and domestic skills are provided to young early school leaver girls. Members of the Friends of Lospalos delivered some unsewn Boomerang Bags sewing kits from the Sorrento Community Centre. Pictures: Supplied

in western districts but in the eastern districts, which included the town of Lospalos we visited, Fretilin gained large swings. At the Luro polling station outside Lospalos, Fretilin obtained 43.85 per cent of the vote to the AMP coalition 34.76 per cent. Informal votes were rare with a total

valid vote of 98.56 per cent in Lautem District, which includes Lospalos. Ballot papers could be marked or pierced against the name and logo of each political party. Voting is non-compulsory but the voter turnout an outstanding 81 per cent - an increase of five per cent on the 2017 parliamentary election result

A 79-YEAR-OLD Mt Eliza man died in hospital on Friday (18 May), weeks after a police car collided with a vehicle during the pursuit of a silver Commodore sedan. Police pursued the sedan, alleged to have been involved in serious offences, on Nepean Highway near Mount Eliza Way at about 8.20pm on 14 April. A police car collided with another vehicle near Humphries Road. Four occupants were taken to hospital at the time. Major Collision Investigation Unit detectives will investigate the fatal collision. Police said the fatality will be investigated by Professional Standards Command, IBAC and the coroner.