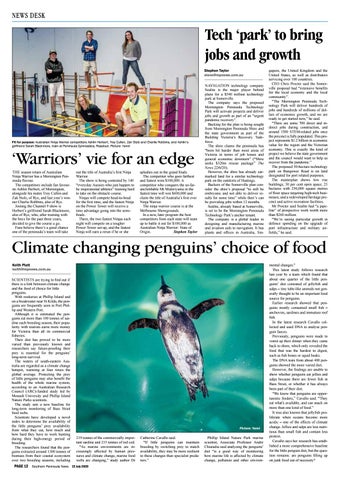 ‘Warriors’ vie for an edge THE season return of Australian Ninja Warrior has a Mornington Peninsula flavour. The competitors include fan favourite Ashlin Herbert, of Mornington, alongside his mates Troy Cullen and Zak Stolz, of Rye, and last year’s winner Charlie Robbins, also of Rye. Joining the Channel 9 show is Herbert’s girlfriend Sarah Blackmore, also of Rye, who, after training with the boys for the past three years, decided to give the course a go. Fans believe there’s a good chance one of the peninsula’s team will take

out the title of Australia’s first Ninja Warrior. The show is being contested by 140 “everyday Aussies who just happen to be inspirational athletes” training hard to take on the obstacle course. Ninjas will compete head-to-head for the first time, and the fastest Ninja on the Power Tower will receive a time advantage going into the semifinals. There, the two fastest Ninjas each night will compete on a tougher Power Tower set-up, and the fastest Ninja will earn a rerun if he or she

splashes out in the grand finals. The competitor who goes farthest and fastest wins $100,000. A competitor who conquers the so-farunclimbable Mt Midoriyama in the fastest time will win $400,000 and claim the title of Australia’s first ever Ninja Warrior. The ninja warrior course is at the Melbourne Showgrounds. In a new, later program the best competitors from each state will team up to battle it out for $100,000 as Australian Ninja Warrior: State of Origin. Stephen Taylor

NAVIGATION technology company Sealite is the major player behind plans for a $540 million technology park at Somerville. The company says the proposed Mornington Peninsula Technology Park will activate projects and deliver jobs and growth as part of an “urgent pandemic recovery”. Backing for the plan is being sought from Mornington Peninsula Shire and the state government as part of the Building Victoria’s Recovery Taskforce. The shire claims the peninsula has “been hit harder than most areas of Victoria in terms of job losses and general economic downturn” (“Shire seeks $320m rescue package” The News 22/6/20). However, the shire has already earmarked land for a similar technology park on the outskirts of Hastings. Backers of the Somerville plan consider the shire’s proposal “to still be embryonic and not able to deliver results for some time” while their’s can be providing jobs within 12 months. Sealite, already based at Somerville, is set to be the Mornington Peninsula Technology Park’s anchor tenant. The company is a global leader in designing and manufacturing marine and aviation aids to navigation. It has plants and offices in Australia, Sin-

gapore, the United Kingdom and the United States, as well as distributors servicing over 100 countries. CEO Chris Procter said the Somerville proposal had “extensive benefits for the local economy and the local community”. “The Mornington Peninsula Technology Park will deliver hundreds of jobs and hundreds of millions of dollars of economic growth, and we are ready to get started now,” he said. “There are some 700 direct and indirect jobs during construction, and around 1500 STEM-related jobs once the precinct is fully populated. This project represents $1.2 billion in economic value for the region and the Victorian economy. This is exactly the kind of project we believe the state government and the council would want to help us recover from the pandemic.” The proposed 50-hectare technology park on Bungower Road is on land designated for port related purposes. The masterplan shows low rise buildings; 50 per cent open space; 25 hectares with 250,000 square metres of floor space targeting high-tech businesses; and a redeveloped heritage precinct and active recreation facilities. Mr Procter said Sealite had “a pipeline” of prospective work worth more than $260 million. “We’re seeing particular growth in defence spending on the upgrade of port infrastructure and military airfields,” he said.

Climate changing penguins’ choice of food Keith Platt keith@mpnews.com.au SCIENTISTS are trying to find out if there is a link between climate change and the food of choice for little penguins. With rookeries at Phillip Island and on a breakwater near St Kilda, the penguins are frequently seen in Port Phillip and Western Port. Although it is estimated the penguins eat more than 100 tonnes of sardine each breeding season, their popularity with tourists earns more money for Victoria than all its commercial fisheries. Their diet has proved to be more varied than previously known and researchers say future-proofing their prey is essential for the penguins’ long-term survival. The waters of south-eastern Australia are regarded as a climate change hotspot, warming at four times the global average. Protecting the prey of little penguins may also benefit the health of the whole marine system, according to an Australian Research Council (ARC)-funded study led by Monash University and Phillip Island Nature Parks scientists. The study sets a new baseline for long-term monitoring of Bass Strait food webs. Scientists have developed a novel index to determine the availability of the little penguins’ prey availability from what they eat, how much and how hard they have to work hunting during their high-energy period of breeding. The researchers found that the penguins extracted around 1300 tonnes of biomass from their coastal ecosystem over two breeding seasons, including

Catherine Cavallo said. “If little penguins can maintain breeding by switching prey to match availability, they may be more resilient to these changes than specialist predators.”

mental changes." This latest study follows research last year by a team which found that about one quarter of the little penguins’ diet consisted of jellyfish and salps – tiny tube-like animals not generally thought to be an important food source for penguins. Earlier research showed that penguins mostly consumed small fish – anchovies, sardines and immature reef fish. In the latest research Cavallo collected and used DNA to analyse penguin faeces. Previously, penguins were made to vomit up their dinner when they came back to shore, which only revealed the food that was the hardest to digest, such as fish bones or squid beaks. The DNA tests from about 400 penguins showed the more varied diet. However, the findings are unable to show whether penguins eat jellies and salps because there are fewer fish in Bass Strait, or whether it has always been part of their diet. “We know that penguins are opportunistic feeders,” Cavallo said. “They eat what's available, and can snack on more than one kind of food.” It was also known that jellyfish proliferate when oceans become more acidic – one of the effects of climate change. Jellies and salps are less nutritious than small fish and contain less protein. Cavallo says her research has established a more comprehensive baseline for the little penguin diet, but the question remains: are penguins filling up on junk food out of necessity?