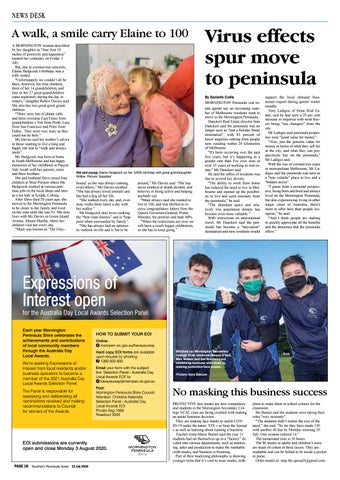 A walk, a smile carry Elaine to 100 A MORNINGTON woman described by her daughter as “four foot 10 inches of positivity and happiness” toasted her centenary on Friday 3 July. But, due to coronavirus concerns, Elaine Hedgcock’s birthday was a trifle muted. “Unfortunately we couldn’t all be there, however, her four children, three of her 14 grandchildren, and four or her 27 great-grandchildren came separately during the day in rosters,” daughter Robyn Davies said. She also has two great-great grandchildren. “There were lots of phone calls and three overseas FaceTimes from grandchildren – Tim from Perth, Lara from San Francisco and Peter from Dubai. They were very teary as they could not be here.” Ms Davies said her mother’s advice to those wanting to live a long and happy life was to “walk and always smile”. Ms Hedgcock was born at home in South Melbourne and has happy memories of her childhood in Pascoe Vale South with her parents, sister and three brothers. She and husband Dave raised four children at West Preston where Ms Hedgcock worked at various parttime jobs in the local shops and later as a tea lady at Kodak, Coburg. After Dave died 20 years ago, she moved to the Mornington Peninsula to be closer to her family and lived on her own until she was 93. She now lives with Ms Davies in Green Island Avenue, Mount Martha, where her children visit her every day. “Mum was known as ‘The Grey-

hound’ as she was always running everywhere,” Ms Davies recalled. “She has always loved animals and has had a dog all her life. “She walked every day and, even now, walks three times a day with her walker.” Ms Hedgcock also loves cooking the “best roast dinners” and is “happiest when surrounded by family”. “She has always had an optimistic outlook on life and is fun to be

around,” Ms Davies said. “She has never smoked or drank alcohol, and believes in being active and helping anybody out. “Mum always said she wanted to live to 100, and was thrilled to receive congratulatory letters from the Queen, Governor-General, Prime Minister, the premier and state MPs. “When the restrictions are over we will have a much bigger celebration, so she has to keep going.”

Virus effects spur move to peninsula By Danielle Collis MORNINGTON Peninsula real estate agents say an increasing number of Melbourne residents want to move to the Mornington Peninsula. Danckert Real Estate director Sam Danckert said the peninsula was no longer seen as “just a holiday home destination”, with 83 percent of buyer inquiries coming from people now residing within 20 kilometres of Melbourne. “It&#39;s been occurring over the past few years, but it’s happening at a greater rate than I&#39;ve ever seen in over 15 years of working in real estate,” Mr Danckert said. He said the influx of residents was due to several key drivers. “The ability to work from home has reduced the need to live in Melbourne and opened up the possibility to live and work remotely from the peninsula,” he said. “The abundant space and relatively low population density has become even more valuable.” With restrictions on international travel, Mr Danckert said the peninsula has become a “staycation” destination and new residents would

support the local demand businesses require during quieter winter months. Tony Ladiges, of Stone Real Estate, said he had seen a 20 per cent increase in inquiries with most buyers being “sea changers” from the city. Mr Ladiges said peninsula properties were “good value for money”. “Also, just the genuine value for money in terms of what they sell for in the city, and what they can prospectively buy on the peninsula,” Mr Ladiges said. With the rise of coronavirus cases in metropolitan Melbourne, Mr Ladiges said the peninsula was seen as a “less volatile” place to live and a “hidden secret”. “I guess from a personal perspective, being born and bred and always lived on the Mornington Peninsula, but also experiencing living in other major cities in Australia, there&#39;s more to offer here than people recognise,” he said. “And I think people are starting to quickly appreciate all the benefits and the amenities that the peninsula offers.”

No masking this business success PROTECTIVE face masks are now compulsory and students in the Mornington Secondary College VCAL class are being credited with making an astute business decision. They are making face masks to tackle COVID-19 under the name: STS – or Stop the Spread – as well as learning about running a business. Teacher Anne-Marie Burnet said the year 11 students had set themselves up in a “factory” divided into various departments, such as marketing, sales and production to make the washable cloth masks, and business is booming. Part of their marketing philosophy is showing younger teens that it’s cool to wear masks, with

plans to make them in school colours for the classroom. Ms Burnet said the students were taking their roles “very seriously”. “The students didn’t realise the size of the need,” she said. “So far they have made 150 with another 40 due by Monday morning 20 July. One woman ordered 14.” The turnaround time is 36 hours. The $6 masks in adults and children’s sizes are made of cotton in three layers. They are washable and can be folded to fit inside a pocket or purse. Order masks at: stop.the.spread3@gmail.com