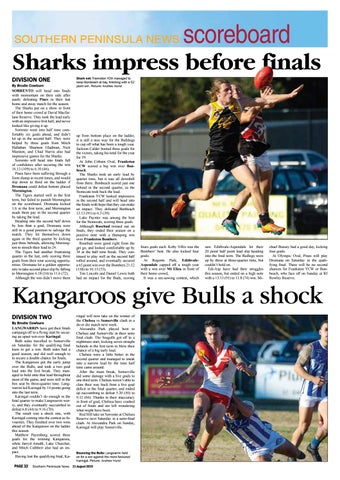 Sharks impress before finals DIVISION ONE

By Brodie Cowburn SORRENTO will head into finals with momentum on their side after easily defeating Pines in their last home and away match for the season. The Sharks put on a show in front of their home crowd at David Macfarlane Reserve. They took the lead early with an impressive first half, and never looked like giving it up. Sorrento went into half time comfortably six goals ahead, and didn’t let up in the second half. They were helped by three goals from Mitch Hallahan. Shannon Gladman, Nick Marston, and Chad Harris also had impressive games for the Sharks. Sorrento will head into finals full of confidence after securing the win 16.13 (109) to 6.10 (46). Pines have been suffering through a form slump in recent times, and would slip down to third on the ladder if Dromana could defeat bottom placed Mornington. The Tigers started well in the first term, but failed to punish Mornington on the scoreboard. Dromana kicked 1.6 in the first term, and Mornington made them pay in the second quarter by taking the lead. Heading into the second half down by less than a goal, Dromana were still in a good position to salvage the match. They let themselves down again in the third quarter by kicking just three behinds, allowing Mornington to stretch their lead to 24. The Tigers had another frustrating quarter in the last, only scoring three goals from their nine scoring opportunities. Dromana let a golden opportunity to take second place slip by falling to Mornington 6.18 (54) to 11.6 (72). Although the win didn’t move them

up from bottom place on the ladder, it is still a nice way for the Bulldogs to cap off what has been a tough year. Jackson Calder booted three goals for the victors, taking his total for the year for 59. At John Coburn Oval, Frankston YCW scored a big win over Bonbeach. The Sharks took an early lead by quarter time, but it was all downhill from there. Bonbeach scored just one behind in the second quarter, as the Stonecats took back the lead. Frankston YCW looked impressive in the second half and will head into the finals with hope that they can make an impact. They defeated Bonbeach 13.13 (91) to 6.3 (39). Luke Paynter was among the best for the Stonecats, scoring three goals. Although Rosebud missed out on finals, they ended their season on a positive note with a thumping win over Frankston Bombers. Rosebud were good right from the get go, and looked comfortable up by 34 at the half time break. They continued to play well as the second half rolled around, and eventually secured a 65 point win over the Bombers 21.12 (138) to 10.13 (73). Tim Lincoln and Daniel Lewis both had an impact for the Buds, scoring

fours goals each. Koby Villis was the Bombers’ best. He also kicked four goals. At Regents Park, EdithvaleAspendale capped off a tough year with a win over Mt Eliza in front of their home crowd, It was a see-sawing contest, which

saw Edithvale-Aspendale let their 20 point half point lead slip heading into the final term. The Redlegs were up by three at three-quarter time, but couldn’t hold on. Edi-Asp have had their struggles this season, but ended on a high note with a 13.13 (91) to 11.8 (74) win. Mi-

chael Bussey had a good day, kicking four goals. At Olympic Oval, Pines will play Dromana on Saturday in the qualifying final. There will be no second chances for Frankston YCW or Bonbeach, who face off on Sunday at RJ Rowley Reserve.

By Brodie Cowburn LANGWARRIN have got their finals campaign off to a flying start by securing an upset win over Karingal. Both sides travelled to Somerville on Saturday for the qualifying final keen to get a win. Both sides had a good season, and did well enough to to secure a double chance for finals. The Kangaroos got the early jump over the Bulls, and took a two goal lead into the first break. They managed to hold onto that lead throughout most of the game, and were still in the box seat by three-quarter time. Langwarrin led Karingal by 14 points going into the last term. Karingal couldn’t do enough in the final quarter to make Langwarrin worry, and they eventually succumbed to defeat 6.8 (44) to 9.16 (70). The result was a shock one, with Karingal coming into the contest as favourites. They finished over two wins ahead of the Kangaroos on the ladder this season. Matthew Payenborg scored three goals for the winning Kangaroos, while Jarryd Amalfi, Luke Churcher, and Mitch Cuthbert also had an impact. Having lost the qualifying final, Ka-

ringal will now take on the winner of the Chelsea vs Somerville clash in a do or die match next week. Alexandra Park played host to Chelsea and Somerville in their semi final clash. The Seagulls got off to a nightmare start, kicking seven straight behinds in the first term to blow their chance of a big early lead. Chelsea were a little better in the second quarter and managed to sneak into a narrow lead by the time half time came around. After the main break, Somerville did some damage with a five goals to one third term. Chelsea weren’t able to claw their way back from a five goal deficit in the final quarter, and ended up succumbing to defeat 5.20 (50) to 9.12 (66). Thanks to their inaccuracy in front of goal, Chelsea have crashed out of finals and are left wondering what might have been. Red Hill take on Sorrento at Chelsea Reserve next Saturday in a semi-final clash. At Alexandra Park on Sunday, Karingal will play Somerville.

Bouncing the Bulls: Langwarrin held on for a win against the more favoured Karingal. Picture: Andrew Hurst 21 August 2019