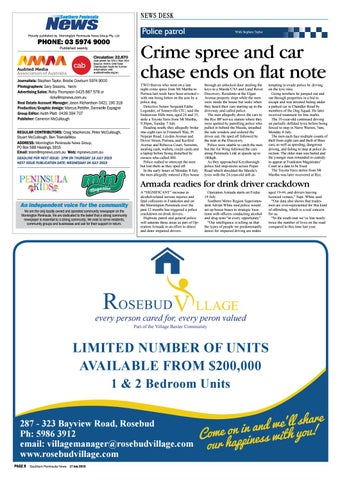 TWO thieves who went on a late night crime spree from Mt Martha to Portsea last week have been arrested – with one being bitten on the arm by a police dog. Detective Senior Sergeant Eddie Logonder, of Somerville CIU, said the Endeavour Hills men, aged 24 and 35, stole a Toyota Yaris from Mt Martha, 9.30pm, Sunday 7 July. Heading south, they allegedly broke into eight cars in Frimmell Way, Pt Nepean Road, Leyden Avenue and Driver Street, Portsea, and Kerferd Avenue and Rebecca Court, Sorrento, stealing cash, wallets, credit cards and a laptop before being disturbed by owners who called 000. Police rushed to intercept the men but lost them as they sped off. In the early hours of Monday 8 July the men allegedly entered a Rye house

through an unlocked door stealing the keys to a Mazda CX5 and Land Rover Discovery. Residents at the Elgan Avenue property slept while the men were inside the house but woke when they heard their cars starting up in the driveway and called police. The men allegedly drove the cars to the Rye BP service station where they were spotted by patrolling police who pulled in behind the Mazda, smashed the side window and ordered the driver out. He sped off followed by the man in the Discovery. Police were unable to catch the men but the Air Wing followed the cars along Peninsula Link at speeds up to 180kph. As they approached Keysborough police laid stop-sticks across Popes Road which shredded the Mazda’s tyres with the 24-year-old still at-

tempting to evade police by driving on the tyre rims. Going nowhere he jumped out and ran through properties in a bid to escape and was arrested hiding under a parked car in Chandler Road by members of the Dog Squad. He later received treatment for bite marks. The 35-year-old continued driving on partially deflated tyres before being forced to stop in Narre Warren, 5am, Monday 8 July. The men each face multiple counts of theft from eight cars and theft of three cars, as well as speeding, dangerous driving, and failing to stop at police direction. The older man was bailed and the younger man remanded in custody to appear at Frankston Magistrates’ Court at a date to be fixed. The Toyota Yaris stolen from Mt Martha was later recovered at Rye.

A “SIGNIFICANT” increase in alcohol-related serious injuries and fatal collisions in Frankston and on the Mornington Peninsula over the past 12 months has triggered a police crackdown on drink drivers. Highway patrol and general police will saturate these areas as part of Operation Armada in an effort to detect and deter impaired drivers.

Operation Armada starts on Friday 19 July. Southern Metro Region Superintendent Adrian White said police would set up booze buses in strategic locations with officers conducting alcohol and drug tests “at every opportunity”. “Our intelligence is telling us that the types of people we predominantly detect for impaired driving are males

aged 19-44, and drivers leaving licenced venues,” Supt. White said. “Our data also shows that tradesmen are over-represented for this kind of offending, which is a real concern for us. “In the south east we’ve lost nearly twice the number of lives on the road compared to this time last year.