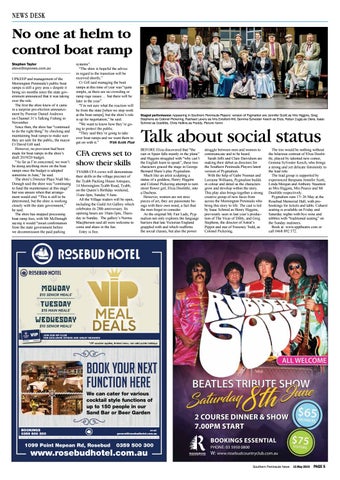 No one at helm to control boat ramp Stephen Taylor steve@mpnews.com.au UPKEEP and management of the Mornington Peninsula’s public boat ramps is still a grey area – despite it being six months since the state government announced that it was taking over the role. The first the shire knew of it came in a surprise pre-election announcement by Premier Daniel Andrews on Channel 31’s Talking Fishing in November. Since then, the shire has “continued to do the right thing” by checking and maintaining boat ramps to make sure they are safe for the public, the mayor Cr David Gill said. However, no provision had been made for boat ramps in the shire’s draft 2019/20 budget. “As far as I’m concerned, we won’t be doing anything more on the boat ramps once the budget is adopted sometime in June,” he said. The shire’s Director Place Niall McDonagh said the shire was “continuing to fund the maintenance at this stage” but was unsure when that arrangement would end. “This is still to be determined, but the shire is working closely with the state government,” he said. The shire has stopped processing boat ramp fees, with Mr McDonagh saying it would “await confirmation from the state government before we decommission the paid parking

systems”. “The shire is hopeful the advice in regard to the transition will be received shortly.” Cr Gill said managing the boat ramps at this time of year was “quite simple, as there are no crowding or ramp rage issues … but there will be later in the year”. “I’m not sure what the reaction will be from the state [when we stop work at the boat ramps], but the shire’s role is up for negotiation,” he said. “We want to know how they’re going to protect the public. “They said they’re going to take over boat ramps and we want them to get on with it.” With Keith Platt

CFA crews set to show their skills TYABB CFA crews will demonstrate their skills in the village precinct of the Tyabb Packing House Antiques, 14 Mornington-Tyabb Road, Tyabb, on the Queen’s Birthday weekend, 11am-3pm, Sunday 9 June. All the Village traders will be open, including the Guild Art Gallery which celebrates its 28th anniversary. Its opening hours are 10am-5pm, Thursday to Sunday. The gallery’s Norma Macpherson said all were welcome to come and share in the fun. Entry is free.

Talk about social status BEFORE Eliza discovered that “the rain in Spain falls mainly in the plane” and Higgins struggled with “why can’t the English learn to speak”, these two characters graced the stage in George Bernard Shaw’s play Pygmalion. Much like an artist sculpting a statue of a goddess, Henry Higgins and Colonel Pickering attempt to turn street flower girl, Eliza Doolittle, into a Duchess. However, women are not stoic pieces of art, they are passionate beings with their own mind, a fact that the men forget to consider. As the original My Fair Lady, Pygmalion not only explores the language barriers that late Victorian England grappled with and which reaffirms the social classes, but also the power

struggle between men and women to communicate and to be heard. Sarah Jeffs and Clare Daividson are making their debut as directors for the Southern Peninsula Players latest version of Pygmalion. With the help of Gabe Noonan and Lorraine Williams, Pygmalion builds in colour and detail as the characters grow and develop within the story. This play also brings together a strong creative group of new faces from across the Mornington Peninsula who bring this story to life. The cast is led by Isaac Schmid as Henry Higgins, previously seen in last year’s production of The Vicar of Dibly, and Greg Stephens, the director of Astral’s Pippin and star of Sweeney Todd, as Colonel Pickering.

The trio would be nothing without the hilarious contrast of Eliza Doolittle, played by talented new comer, Gemma Sylvester Keech, who brings a strong and yet delicate femininity to the lead role. The lead group is supported by experienced thespians Jennifer Scott, Linda Morgan and Anthony Staunton as Mrs Higgins, Mrs Pearce and Mr Doolittle respectively. Pygmalion runs 17- 26 May at the Rosebud Memorial Hall, with prebookings for tickets and table. Cabaret seating is available on Friday and Saturday nights with byo wine and nibbles with “traditional seating” on the Sunday matinees. Book at www.spptheatre.com or call 0468 892 572.