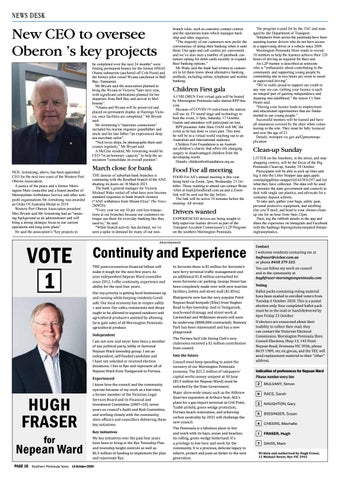 New CEO to oversee Oberon ’s key projects be completed over the next 24 months” were finding permanent homes for the former HMAS Otama submarine (anchored off Crib Point) and the former pilot vessel Wyuna (anchored in Bell Bay, Tasmania). Mr Bryant said the association planned to bring the Wyuna to Victoria “later next year, with significant celebrations planned for her departure from Bell Bay and arrival in Melbourne”. “Otama and Wyuna will be preserved and placed on permanent display at Hastings Victoria, once facilities are completed,” Mr Bryant said. Mr Armstrong’s “maritime connections” included his marine engineer grandfather and uncle and his late father “an experienced deep sea merchant sailor”. “Neil loves ships, he photographs them and cruises regularly,” Mr Bryant said. A McCrae resident, Mr Armstrong would be CEO “in an honorary capacity” to help the association “consolidate its overall position”. NEIL Armstrong, above, has been appointed CEO for the next two years of the Western Port Oberon Association. A justice of the peace and a former Mornington Shire councillor and a board member of Metropolitan Ambulance Service and other nonprofit organisations Mr Armstrong was awarded an Order Of Australia Medal in 2019. Western Port Oberon Association president Max Bryant said Mr Armstrong had an “amazing background as an administrator and will bring a strong strategic focus to our current operations and long term plans”. He said the association’s “key projects to

March close for bank THE demise of suburban bank branches is continuing with the Rosebud branch of the ANZ shutting its doors on 18 March 2021. The bank’s general manager for Victoria Michael Wake reeled off what have now become standard responses to bank branch closures (“ANZ withdraws from Mount Eliza” The News 28/9/20). “Every year we see 10 per cent less transactions at our branches because our customers no longer use them for everyday banking like they used to,” he said. “While branch activity has declined, we’ve seen a spike in demand for many of our non-

Food For all meeting FOOD For All’s annual meeting is this year being held via Zoom, 2pm, Wednesday 21 October. Those wanting to attend can contact Brian Allen at mail@foodforall.com.au and a Zoom link will be sent out the day before. The link will be active 10 minutes before the meeting. All invited.

Drivers wanted EXPERIENCED drivers are being sought to help supervise learner drivers as part of the Transport Accident Commission’s L2P Program on the southern Mornington Peninsula.

LITTER on the foreshore, in the street, and near shopping centres, will be the focus of the Big Peninsula Clean-up, Sunday 18 October. Participants will be able to pick up litter and log it into the Litter Stopper app apps.apple. com/au/app/litter-stopper/id1445816297 and list what they have collected. The data will be used to pressure the state government and councils to deal with single use plastics, and advocate for a container deposit scheme. To take part, gather your bags, safety gear, personal protective equipment, and anything else you’ll need, and head to your chosen cleanup site for an hour from 9am-12pm. Then, log the rubbish details in the app and share the experience on Instagram and Facebook with the hashtags #springcleanyourpatch #stopsingleuseplastics.

THE post-coronavirus financial fallout will make it tough for the next few years. As your independent Nepean Ward councillor since 2012, I offer continuity, experience and ability for the next four years.

You can follow my work on council and in the community at hughfraser-morningtonpeninsula.com

Our top priority is getting local businesses up and running while keeping residents Covidsafe. Our local economy has to reopen safely – and soon. Our cafes, restaurants and shops ought to be allowed to expand outdoors and agricultural producers assisted by allowing farm gate sales of all Mornington Peninsula agricultural produce.

A CHILDREN First virtual gala will be hosted by Mornington Peninsula radio station RPP this year. Because of COVID-19 restrictions the station will use its TV sound stage and technology to host the event, 5-7pm, Saturday 17 October. Guests and attendees will participate on line. RPP presenter John Shoe OAM will MC the event as he has done in years past. This time he will be in a virtual world reaching out to an Australian and international audience. Children First Foundation is an Australian children’s charity that offers life changing surgery to disadvantaged children from the developing world. Details: childrenfirstfoundation.org.au

The program is paid for by the TAC and managed by the Department of Transport. Volunteers from across the peninsula have been assisting learner drivers who do not have access to a supervising driver or a vehicle since 2009. Mornington Peninsula Shire wants to recruit 10 mentors to help the learners achieve their 120 hours of driving as required for their test. An L2P mentor is described as someone who is “enthusiastic about contributing to the community and supporting young people by committing one to two hours per week to assist in supervised driving”. “We’re really proud to support our youth in any way we can. Getting your licence is such an integral part of gaining independence and stepping into adulthood,” the mayor Cr Sam Hearn said. “Having your licence leads to employment and educational opportunities that are fundamental to our young people.” Successful mentors will be trained and have all insurances covered by the shire when volunteering in the role. They must be fully licenced and over the age of 21. Details: mornpen.vic.gov.au/l2pmentorapplication

I am not now and never have been a member of any political party, lobby or factional Nepean Ward township group. I am an independent, self-funded candidate and I have not solicited or received election donations. I live in Rye and represent all of Nepean Ward from Tootgarook to Portsea.

branch roles, such as customer contact centres and the operations team which manages hardship and other inquiries. “The majority of our customers now prefer the convenience of doing their banking when it suits them. Our apps and call centres are convenient and we’ve also seen a number of passbook customers opting for debit cards recently to expand their banking options.” Mr Wake said the bank had written to customers to let them know about alternative banking methods, including online, telephone and mobile banking.

I know how the council and the community operate because of my work as a barrister, a former member of the Victorian Legal Services Board and its Financial and Investment Committee (2007–10), seven years on council’s Audit and Risk Committee, and working closely with the community, shire officers and councillors delivering these key initiatives: Key initiatives

My key initiatives over the past four years have been to bring in the Rye Township Plan and township height controls as well as $6.5 million of funding to implement the plan and rejuvenate Rye.

In Sorrento there is $5 million for Sorrento’s new ferry terminal traffic management and an additional $1.8 million earmarked for more Sorrento car parking. George Street has been completely made over with new tourism facilities, toilets and street mall ($1.85m). Blairgowrie now has the very popular Point Nepean Road footpath ($3m) from Hughes Road to Rye township. And in Tootgarook, much-need drainage and street work at Carmichael and Wilkinson streets will soon be underway ($800,000 contracted). Romney Park has been rejuvenated and has a new playground. The Portsea Surf Life Saving Club’s new clubrooms received a $1 million contribution from council. Into the future

Council must keep spending to assist the recovery of our Mornington Peninsula economy. The $25.5 million of ratepayers’ capital works money unspent at 30 June ($5.9 million for Nepean Ward) must be unlocked by the State Government.

The Peninsula is a fabulous place to live and work with its bays, ocean and beaches; its rolling, green wedge hinterland. It’s a privilege to live here and work for the community. It is a precious, delicate legacy to inherit, protect and pass on better to the next generation.

Ballot packs containing voting material have been mailed to enrolled voters from Tuesday 6 October 2020. This is a postal election only. Your completed ballot pack must be in the mail or hand-delivered by 6pm Friday 23 October.

If electors are concerned about their inability to collect their mail, they can contact the Victorian Electoral Commission, Mornington Peninsula Shire Council Elections, Shop 13, 143 Point Nepean Road, Dromana VIC 3936, phone 8619 1909, vec.vic.gov.au, and the VEC will send replacement material to their “other” address.

Indication of preferences for Nepean Ward Please number every box 2