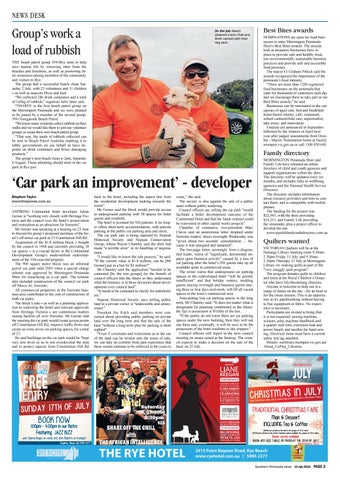 On the job: Beach cleaners Karen Post and Brett Lamont with their dog Jack.

NOMINATIONS are open for food businesses to enter Mornington Peninsula Shire's Best Bites awards. The awards look at measures businesses have in place to provide safe and healthy food, use environmentally sustainable business practices and provide safe and accessible food premises. The mayor Cr Graham Pittock said the awards recognised the importance of the peninsulaâ&#x20AC;&#x2122;s food industry. â&#x20AC;&#x153;There are more than 1200 registered food businesses on the peninsula that cater for thousands of customers each day and we encourage them to take part in our Best Bites awards," he said. Businesses can be nominated in the categories of aged care; bed and breakfast/ home-based retailer; cafe; restaurant; school canteen/child care; supermarket; take away; and innovation. Finalists are announced in September followed by the winners in April next year after judges' assessments from October - March. Nomination forms at food@ mornpen.vic.gov.au or call 1300 850 600.

THE beach patrol group 3941Rye aims to help save marine life by removing litter from the beaches and foreshore, as well as promoting litter awareness among members of the community and visitors to Rye. The group had a successful beach clean Saturday 2 July, with 23 volunteers and 11 children â&#x20AC;&#x201C; as well as mascots Dixie and Jack. â&#x20AC;&#x153;We collected 286 drink containers and a total of 144kg of rubbish,â&#x20AC;? organiser Julie Jame said. â&#x20AC;&#x153;3941RYE is the first beach patrol group on the Mornington Peninsula and we were pleased to be joined by a member of the second group: 3941Tootgarook Beach Patrol. â&#x20AC;&#x153;We know many residents collect rubbish on their walks and we would like them to join our volunteer groups or create their own beach patrol group. â&#x20AC;&#x153;That way, the totals of rubbish collected can be sent to Beach Patrol Australia enabling it to lobby governments on our behalf to have deposits on drink containers and fewer damaging products.â&#x20AC;? The groupâ&#x20AC;&#x2122;s next beach clean is 2pm, Saturday 6 August. Those attending should meet in the car park at Rye pier.

back to the hotel, including the aspect line from the residential development looking towards the oceanâ&#x20AC;?. Mr Gerner said the block would provide access to underground parking with 58 spaces for hotel guests and residents. The hotel is licensed for 920 patrons. It no longer offers short-term accommodation, with patrons parking in the public car parking area and street. The car park sale is being opposed by Nepean Historical Society and Nepean Conservation Group, whose Wayne Chamley said the shire had made â&#x20AC;&#x153;a terrible errorâ&#x20AC;? in its handling of negotiations. â&#x20AC;&#x153;I would like to know the sale process,â&#x20AC;? he said. â&#x20AC;&#x153;If the current value is $1.8 million, can he [Mr Gerner] put in a bid for $2 million?â&#x20AC;? Mr Chamley said the application â&#x20AC;&#x153;needed to be contested [by the two groups] for the benefit of council officers into the future so they understand what the leniency is in these decisions about developments over council landâ&#x20AC;?. â&#x20AC;&#x153;It needs to be contested to clarify for stakeholders.â&#x20AC;? Nepean Historical Society says selling public land to a private owner is â&#x20AC;&#x153;undesirable and unnecessaryâ&#x20AC;?. President Joy Kitch said members were concerned about providing public parking on private land over the long term and that the sale of the land â&#x20AC;&#x153;without a long-term plan for parking is short sightedâ&#x20AC;?. â&#x20AC;&#x153;Even if covenants and restrictions as to the use of the land can be written into the terms of sale, we can take no comfort from past experience that these would continue to be enforced in the years to

come,â&#x20AC;? she said. The society is also against the sale of a public asset without public tendering. Council officers say selling the car park â&#x20AC;&#x153;would facilitate a better development outcome of the Continental Hotel and that the funds realised could be reinvested in other capital works projectsâ&#x20AC;?. Chamber of commerce vice-president Marc Clavin said an anonymous letter dropped under Sorrento tradersâ&#x20AC;&#x2122; doors overnight Wednesday was â&#x20AC;&#x153;given about two secondsâ&#x20AC;&#x2122; consideration â&#x20AC;Ś because it was unsigned and unnamedâ&#x20AC;?. The two-page letter, seemingly from a disgruntled trader, warns of â&#x20AC;&#x153;significant, detrimental impacts upon business activityâ&#x20AC;? caused by a loss of car parking after the hotelâ&#x20AC;&#x2122;s 920 guests take up all available spots in commercial areas. The writer warns that underground car parking spaces in the redeveloped hotel â&#x20AC;&#x153;will be grossly insufficientâ&#x20AC;? and that holiday renters, wedding guests staying overnight and business guests staying three or four days mid-week, will fill all vacant spaces in the townâ&#x20AC;&#x2122;s commercial area. Anticipating lost car parking spaces in the long term, Mr Chamley said: â&#x20AC;&#x153;It does not matter what is designated [in planning conditions] in the future: the fact is possession is 9/10ths of the law. â&#x20AC;&#x153;If the public do not know there are car parking spaces under the new building, then they will not use them and, eventually, it will be seen to be the possession of the hotel residents or day trippers.â&#x20AC;? Council officers will report to the next council meeting on issues raised at the hearing. The council expects to make a decision on the sale of the bock on 25 July.

MORNINGTON Peninsula Shire and Family Life have released an online directory of child and youth agencies and support organisations within the shire. The directory will be updated every six months, and includes links to wellbeing agencies and the National Health Service Directory. The directory includes information about resource providers and how to contact them, and is compatible with mobile phones. The funding for the project was $22,945, with the shire providing $14,211, and Family Life providing the remainder, plus a project officer to develop the site. www.mpchildandyouthdirectory.com.au

Quilters wanted VICTORIAN Quilters will be at the Hastings Library meeting room 9.30am2.30pm Friday 15 July, and 9.30am2.30pm Thursday 21 July at Mornington Library on making quilts as part of the â&#x20AC;&#x153;very snuggly quilt programâ&#x20AC;?. The program donates quilts to children and teens at the Royal Childrenâ&#x20AC;&#x2122;s Hospital who have life-threatening illnesses. Anyone is welcome to help out in a range of duties on the day - for an hour or for the entire session. This is an opportunity to try patchworking without having to buy equipment or fabric. No experience is necessary. Participants are invited to bring (but it is not required): sewing machine, scissors, pins; machine handbook and a quarter inch foot; extension lead and power board; and needles for hand sewing. Electrical items must have a current safety test tag attached. Details: ourlibrary.mornpen.vic.gov.au/ About_Us/Our_Libraries